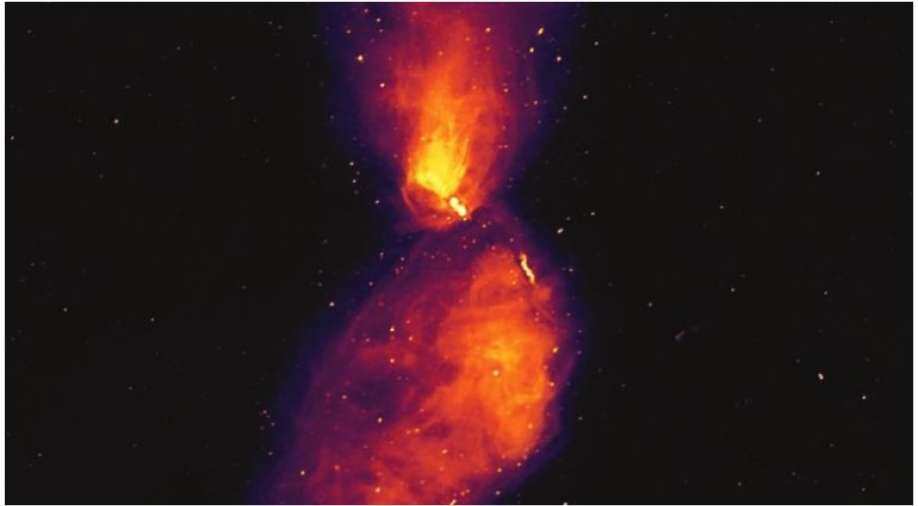 The erupting black hole Photograph:( Others )

The black hole in question is at the centre of Centaurus A, the nearest radio galaxy closest to our own Milky Way. The galaxy is 12 million light years away from us

Volcanic eruptions are as beautiful to watch as they are destructive to people living around the volcano. If a natural phenomenon on Earth can be so remarkable, what about celestial eruptions? To be more precise, what about eruptions taking place from a black hole?

Black holes are intriguing space objects. They have such powerful gravity that even light cannot escape from it. But eruptions do take place from black holes and scientists have been able to capture an image of one such eruption.

The black hole in question is at the centre of Centaurus A, the nearest radio galaxy closest to our own Milky Way. The galaxy is 12 million light years away from us.

The black hole is still feeding. This means that the surrounding gas is still falling inside it. As the black hole gobbles up gas, it ejects material that nearly travels at the speed of light. This causes 'radio bubbles' to form.

This eruption and the radio waves have been caught by Murchison Widefield Array (MWA) telescope in Western Australia.

“These radio waves come from material being sucked into the supermassive black hole in the middle of the galaxy,” said Dr. Benjamin McKinley, lead author of the study. He was quoted by ScieTechDaily.

“It forms a disc around the black hole, and as the matter gets ripped apart going close to the black hole, powerful jets form on either side of the disc, ejecting most of the material back out into space, to distances of probably more than a million light years"

Research on this black hole eruption was published in journal Nature Astronomy on December 22, 2021.