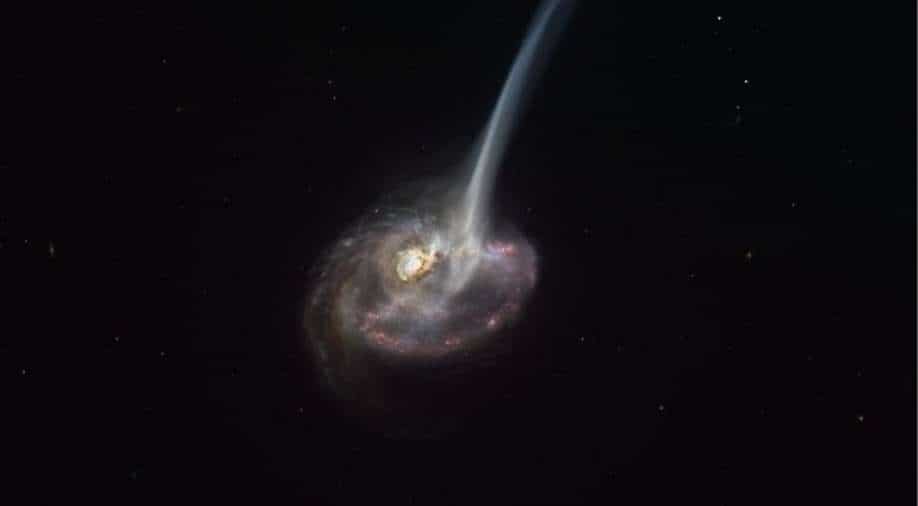 Astronomers at the European Southern Observatory have captured a distant galaxy dying and losing its ability to form stars.

A galaxy caught dying? @ALMAObs sees a distant galaxy ejecting nearly half of its star-forming gas at a rate equivalent to 10,000 Suns worth of gas a year, causing the galaxy to lose its fuel to make new stars.
Credit: @ESO /M. Kornmesser https://t.co/JXduGUEoya pic.twitter.com/QHqfoNmTCR

The spectacular event was triggered by the collision of another galaxy as per the Atacama Large Millimeter/submillimeter Array (ALMA).

The new study was published in Nature Astronomy and suggests galactic mergers can be responsible for ejecting star-forming fuel into space.

Earlier, astronomers believed that winds caused by star formation and the activity of black holes at the centre of the galaxies are responsible for launching star-forming material into space thus ending thus, ending galaxies abilities to make new stars.

Scientists were able to trace it due to the ejected gas called ''tidal tail'', which are elongated streams of stars and gas extending into interstellar space due to the merger of two galaxies.

The galaxy, known as ID2299 was formed when the Universe was just 4.5 million years old. It will shut down in a few tens of millions of years as it is ejecting 46 per cent of its total star-forming gas while new stars are being formed by other galaxies very rapidly.

Annagrazia Puglisi, the lead researcher on the new study, said: “This is the first time we have observed a typical massive star-forming galaxy in the distant Universe about to ‘die’ because of a massive cold gas ejection.”

While the study's co-author Emanuele Daddi from CEA-Saclay believes “Our study suggests that gas ejections can be produced by mergers and that winds and tidal tails can appear very similar.”

“This might lead us to revise our understanding of how galaxies ‘die’,” Daddi adds.