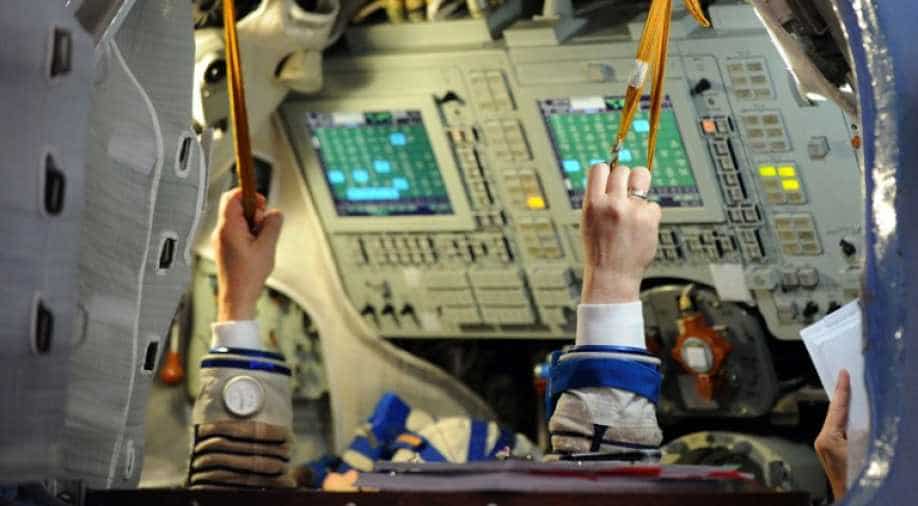 The craft's journey to dock at the ISS will take two days - longer than the usual six-hour flight. (Representative image) Photograph:( AFP )

Follow Us
Three astronauts blasted off into the early morning sky in an upgraded Soyuz spacecraft from Russia's Baikonur cosmodrome on Thursday, heading towards the International Space Station (ISS).

First-time astronauts Kathleen Rubins of NASA and Takuya Onishi of the Japanese space agency set off for a four-month mission at the ISS with Russian cosmonaut Anatoly Ivanishin at around 0136 GMT.

"All is well on board!" said mission control in comments relayed by NASA TV, which broadcast footage of the launch in Kazakhstan.

Footage also showed Ivanishin and Onishi giving each other fist bumps to celebrate the successful launch.

Features of the new Soyuz series include upgraded boosters, an improved navigation system, strengthened shielding from debris and more cells on the craft's solar panels.

The trio's launch was delayed by two weeks as Russian space officials carried out further software tests on the modified vehicle.

The craft's journey to dock at the ISS will take two days - longer than the usual six-hour flight - to give ground control more time to monitor the tweaked system's performance.

NASA's Kate Rubins will be the first woman aboard the ISS since Italian Samantha Cristoforetti returned to earth with the record for the longest single spaceflight by a woman (199 days) in June last year.

The molecular biologist-turned astronaut will also become the first person to sequence DNA in space during her mission.

"Rocket is on the launchpad, crew is ready to go! #AstroKate" the NASA Astronauts Twitter handle tweeted prior to her launch.

Rubins' launch caps an exciting week for NASA as the US space agency's unmanned Juno spacecraft entered orbit around distant Jupiter on Tuesday after a journey of nearly five years.

Onishi, who trained as a pilot on Japan's largest commercial airliner, is the eleventh Japanese national to enter space.

His journey to the ISS, where he will participate in experiments connected to the Japanese space agency's Kibo program, coincides with the Tanabata star festival celebrated across his homeland.

The last Japanese astronaut to spend time at the ISS, Kimiya Yui, returned to earth from the ISS in December alongside NASA's Kjell Lindgren and Russian cosmonaut Oleg Kononenko.

Flight engineer Anatoly Ivanishin has already logged over 165 days in space following his first mission at the ISS in 2011 and 2012 and has a background as a military pilot.

The ISS space laboratory has been orbiting Earth at about 28,000 kilometres per hour since 1998.

Space travel has been one of the few areas of international cooperation between Russia and the West that has not been wrecked by geopolitical tensions over Ukraine.