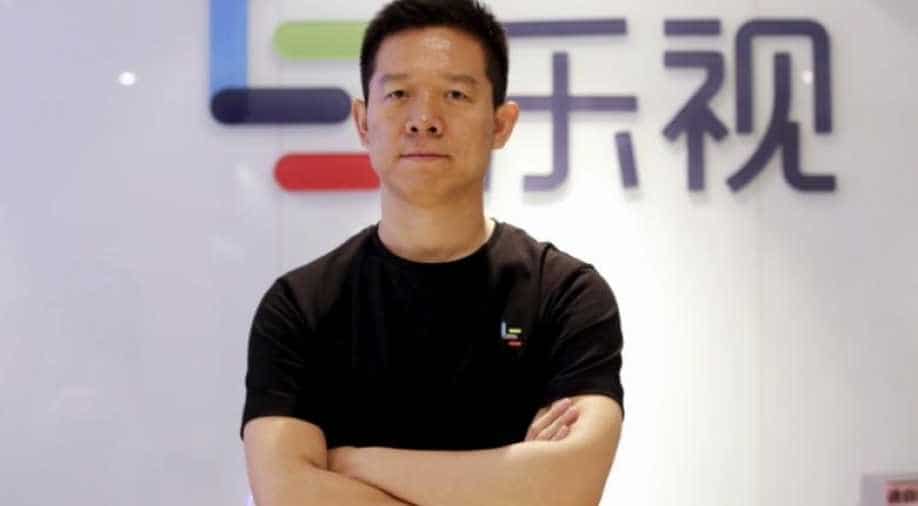 Jia Yueting, co-founder and head of Le Holdings Co Ltd, also known as LeEco and formerly as LeTV, poses for a photo in front of a logo of his company. Photograph:( Reuters )

The founder of LeEco, has stepped down as the head of the group's main listed unit Leshi. ||While it began with a Netflix-like video streaming service and expanded into an array of products and services, the group has been fighting a cash crunch since last year. ||

The founder of LeEco, a cash-strapped Chinese Netflix-to-Tesla-like conglomerate, has stepped down as the head of the group's main listed unit, amid a wider restructuring that seeks to isolate successful businesses from struggling operations.

Sunac said the management change is not an attempt to take more control of Leshi, considered one of the healthiest assets among LeEco's expansive business empire. But it marks a push to bolster the streaming business' operations.

"There is no such thing as a fight for control," Liu Shuqing, a Sunac-appointed director on the board of Leshi, said at Leshi's press briefing on Sunday, according to a transcript seen by Reuters.

In a letter to all LeEco staff seen by Reuters, Jia called the two new appointments as Leshi's "most important milestone since its IPO in 2010", aimed at improving the listed company's performance.

Jia said in the letter his personal focus over the past two years on LeEco's non-listed businesses, which include consumer electronics and cars, had dragged down Leshi's development.

"I had expressed my apologies and gratitude to investors at the end of last year and promised to refocus on our listed businesses," Jia said in the letter.

"After we introduced the second-largest and strategic shareholder (Sunac), we formally initiated a major restructuring of Leshi."

Jia, who is continuing as chairman of Leshi and remains the CEO of the bigger LeEco group, said he will "focus on the governance, strategic planning and core product innovation" of LeEco's listed units.

LeEco began with a Netflix-like video streaming service and expanded into an array of products and services. The group has been fighting a cash crunch since last year that Jia said was the result of that aggressive growth.