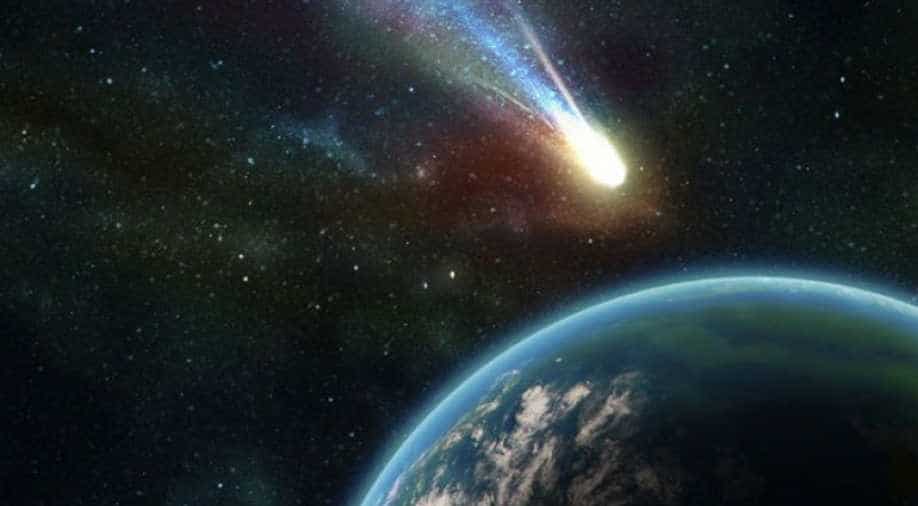 Such a strike likely unleashed billions of tons of sulfur and other gases into the atmosphere, blocking the sun and leading to a dramatic cooling of the Earth's climate.

The city size-asteroid which wiped out 75 per cent of all species including the dinosaurs 66 million years ago, came from the northeast at a steep angle according to a new study.

Investigations at the crater site, together with computer simulations, suggest the impactor dug into the crust at an inclination of up to 60 degrees.

This exacerbated the climate fallout.

A new study of Chicxulub crater in Mexico, where the asteroid struck, has revealed that the angle and speed of the impact were probably in the perfect range to send clouds of choking vapour into the skies.

When an asteroid hits a planet, the resulting crater is highly dependent on the angle of the impact.

Gareth Collins at Imperial College London in the UK and his colleagues compared a set of simulations with geological data gathered at Chicxulub crater to reconstruct that impact.

“That initial impact gouges a huge hole in the ground, which then collapses spectacularly and you form this huge overshoot, rather like what happens when you throw a pebble into the pond,” says Collins. In this “overshoot”, the middle of the hole bounces back up to create a plateau at the centre of the crater.

In simulations of the Chicxulub impact, that central plateau was tilted toward the direction the asteroid came from, though how tilted it was depended on the angle of the impact.

According to the study, 3D simulations showed that the asteroid hit at an angle of 40 to 60 degrees, what Gareth Collins, a professor of planetary science at Imperial College London's department of earth science and engineering, described as a worst-case scenario for the dinosaurs.

"The asteroid strike unleashed an incredible amount of climate-changing gases into the atmosphere, triggering a chain of events that led to the extinction of the dinosaurs. This was likely worsened by the fact that it struck at one of the deadliest possible angles," said Collins, the lead author of the study that published Tuesday in the journal Nature Communications, in a statement.

"We know that this was among the worst-case scenarios for the lethality on impact, because it put more hazardous debris into the upper atmosphere and scattered it everywhere — the very thing that led to a nuclear winter," he added.

Such a strike likely unleashed billions of tons of sulfur and other gases into the atmosphere, blocking the sun and leading to a dramatic cooling of the Earth's climate.