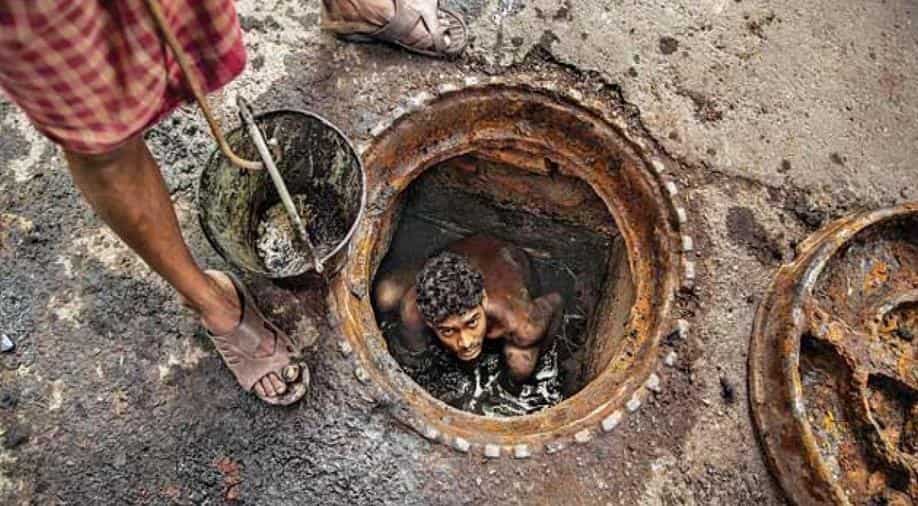 Technological advancement is the way forward to tackle the problems in connection with the sewage management across the country and to end manual scavenging.

When Swachh Bharat Mission (Government's Cleanliness Campaign) is all set to complete four years of its implementation, drawing applause for the increased number of toilets across the country, let's take notice of the other side of the scheme -  sewage treatment.  A little has changed for people who are involved in the job of dealing with human waste.

As many as 634 sanitation workers have died while cleaning sewers and septic tanks across the country in last 25 years, according to data collated by the National Commission for Safai Karamcharis (NCSK). The commission was established in 1994 to deal with the grievances of persons engaged in manual scavenging.

Swachh Bharat Mission, which primarily focuses on constructing toilets and keeping the streets clean, needs to do more to modernise sanitation process and eliminate manual scavenging.

Manual scavenging was banned in 1993, however, private contractors, households and local agencies continue to hire workers for such jobs.

Death of five sewage workers in Delhi last week has put the spotlight on the matter once again. The workers were not even given protective gears. The incident led to widespread condemnation and protests, demanding an immediate ban on manual scavenging.

A year later, in 2014, the apex court directed state governments to implement the 2013 Act and also fixed a compensation of Rs 10 lakh for the kin of those who died cleaning sewers since 1993.

Meanwhile, authorities, both on the state and the district level, have failed to implement the laws and court directives in a stringent manner.

Central government should frame laws against the government officials and agencies, who wash hands off by pinning the blame on private contractors.  The agencies can't be absolved of criminality just because the workers are not employed directly by them.

Furthermore, states and districts should ensure that the laws and rehabilitation policies, framed by the central government, and court directives are implemented in a proper manner.

The Human Rights Watch report, in 2014, pointed out that manual scavengers are usually from caste groups customarily relegated to the bottom of the caste hierarchy. "Women usually clean dry toilets, men and women clean excrement from open defecation sites, gutters, and drains, and men are called upon to do the more physically demanding work of cleaning sewers and septic tanks, it says.

People involved in such jobs should be motivated and counselled to leave this caste-based custom and be given proper opportunities and assistance - jobs, housing and other basic facilities. The authorities should also provide them protection from threats and intimidation by their employers for leaving the jobs.

India can learn from foreign countries, including Japan, Malaysia, Singapore and China, to effectively manage the sewage treatment. These countries have invested in machinery and equipment to design advanced sewer cleaning systems, which doesn't require humans to be engaged in manual scavenging.

Hence, technological advancement is the way forward to tackle the problems in connection with the sewage management across the country and to end various forms of manual scavenging.

Adaptation of advanced technologies and the introduction of improved equipment to mechanise the sewage cleaning is a must. We just can't let workers die. Machines are supposed to be cleaning sewers and septic tanks, and not people.