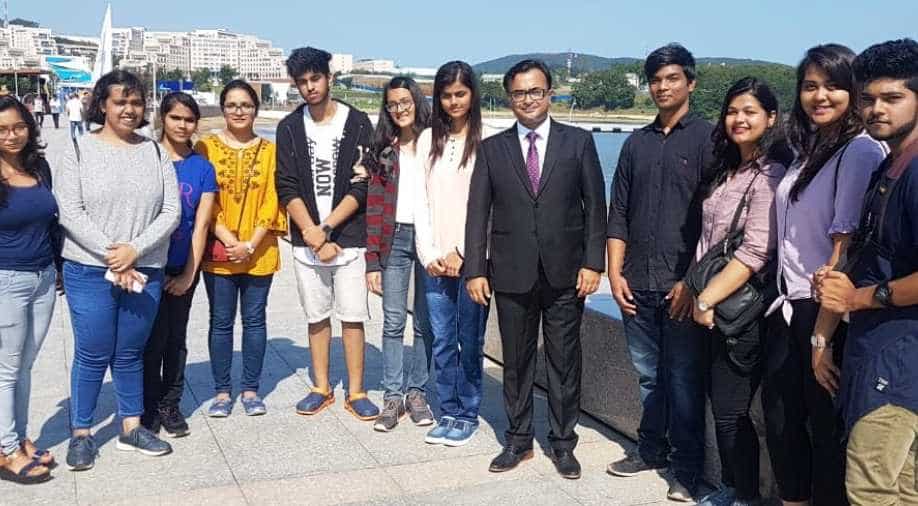 Vladivostok is also home to many Indian students

Indian students can be found studying medicine throughout Russia. Earlier, exchanges were limited to institutes in and around Moscow but with the collapse of the Soviet Union, Indians in large numbers started going to Central Asian Countries.

Many came back home with degrees but still got no jobs as medical degrees were not being accepted back at home. This rule remains but students still flock Russian universities. Now they can sit for an additional exam and do a year of internship to make the transition as a full-fledged medical professional in India. Vladivostok is also home to many Indian students. After opening up in 1992, it has seen a steady rise in Indian fraternity. I had an opportunity to bump into a batch of students from India at Far Eastern Federal University. The students love Russia despite language and food problems. The Russian food is almost bland in comparison to regular Indian food but the ambience at the FEFU campus and neat environment of Vladivostok make up for the food and host of other issues. Education in Russia is affordable if compared to the West. Almost all students were enrolled in medicine.

I was shocked to discover that this particular batch of students was having a hard time from the agency which helped them through admission and accreditation at FEFU. Almost all will spend, Rs 30 lakhs in the six years they will spend in the university but did not get what the agency promised them. They told me that they were even promised cooked Indian food facility but discovered to their rude shock that they had to share a kitchen on a floor where they were expected to cook their own food. Food is expensive in Russia and students felt cheated. They were even given small dormitories. I immediately understood that many agencies operating from India continue to take students interested in studying in Russia for a ride. The only silver lining is that the senior batch has come out in strength to help the juniors. This batch does not have their original papers which continues to be in the possession of a Chhattisgarh based agency. In its absence, they end up losing their admission.

Students said that they had asked for their original certificates and agency which agency has denied them. They complained that they were made to sign in Russian that documents would continue to be in the agency’s possession which makes them vulnerable. Though none wants to go back because in Russia we are not treated as South Asians but as Indians and different from Pakistanis.

It is one thing to enjoy a campus as a student and another to report from it. FEFU is a beautiful campus but TV journalist like me had a hard time on the 2nd day itself. The campus is situated on an island which in itself is a small mountain. Buses only ply from one point towards Eastern Economic Forum centres but if one has to go to any other part then except walking there exists no option. So, one gets end up getting dropped at the gate coming back from the city there on the drudgery begins. It means, heavy lifting of camera equipment and ends up walking a lot with formal clothes on. It sounds like a good idea, keeping my waist in mind but let me tell you, it didn’t work. It only led to binge eating as instead of feeling refreshed, every bone in my body ached. 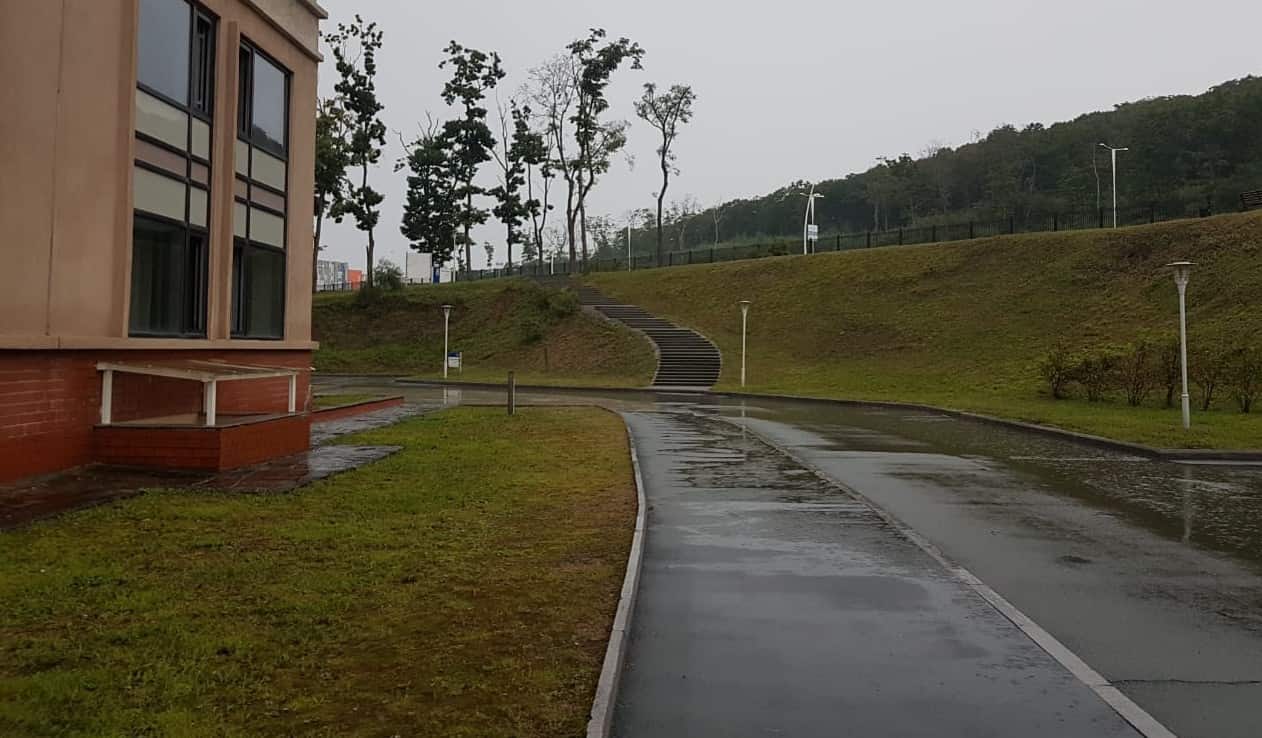 I read about this beach in a magazine long time back and thought that I will visit it if I ever get the chance to visit the Far East. I did this time around. The beach looks at the Sea of Japan is filled covered with glass pebbles. The story goes that a glass factory dumped a lot of waste glass in the nearby river which eventually came down to the sea and nature stamped its authority on the man-made waste by polishing it and throwing it back on the beach. 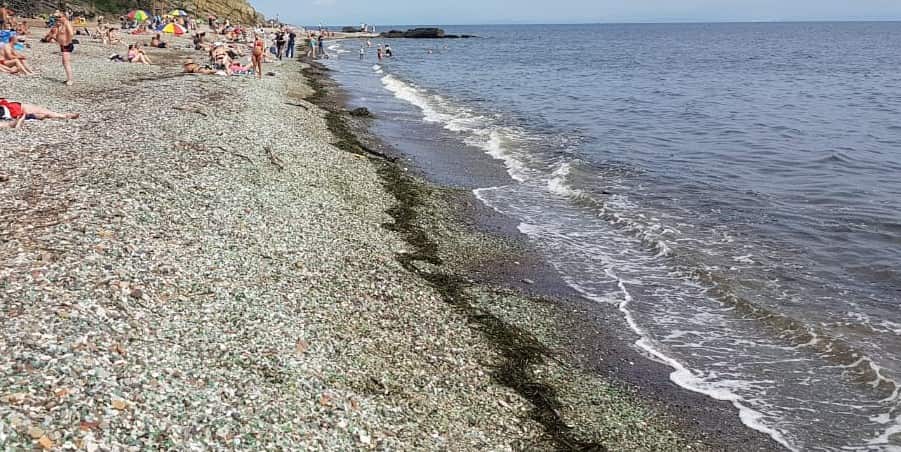 Today, it is a big tourist attraction in Vladivostok. People come for a swim and cook their own food on the beach. The beach is not commercial and is surrounded by forest. The beach is a classic example of how the natural world can reshape the artificial world built by mankind. If anyone goes to the beach, I would recommend, boiled sweet corn cob and deep-fried patty made of meat, salt, sweated onions and cumin. It is pure bliss. There is no chat masala to go by, but I promise you that the humble and simple flavour of the corn and tenderness of the meat will blow you away.

Vegetarians can have a tough time in Russia. Vladivostok too is no different. Vegetarian food is hard to find. A nearby store had no vegetarian food and the owner tried her best to sell chicken sandwich saying that this is the closest thing she had to a vegetarian meal. When I protested, she quickly directed me the potato chips corner. I am not a vegetarian but my cameraman is. He ended his first day with chips and I with Russian vodka and beef sandwiches. I felt guilty as I did give him enough time to eat food offered by gracious Shilpa Kothari whose husband we had covered a day earlier. So, the next day, I took my cameraman to her factory where she was busy organising a religious ritual. I had official work to do but I knew that she would definitely ask my cameraman to eat as she knew that he was a vegetarian. This time he did not decline and had pure vegetarian food. I also ended up eating and glad I did. We were treated to an amazing Gujrati Karhi. It was as authentic as it could have been.