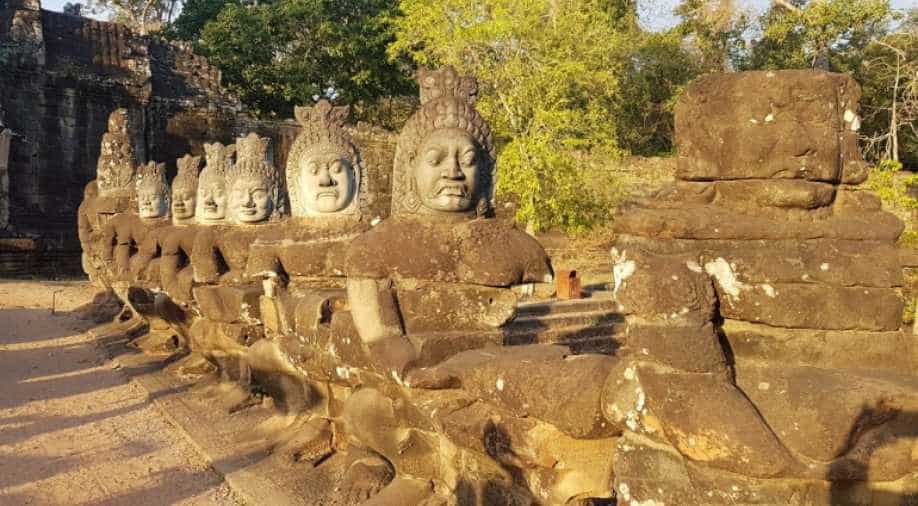 The city was also known as Param Vishnu Lok before the Kings of Cambodia converted to Buddhism.

Go to any part of Angkor Wat or Angkor Thom, two brilliant temples complexes in Siem Reap, the display from Ramayana and Mahabharata on the walls of the complex will blow you away.

The beauty lies in the detail. The walls of Angkor Wat have full illustration of both epic tales and Samudramanthan which is known as the tale of churning of the seas from which both celestial nectar and poison came out.

The walls have detailing of fight between monkey king Bali and Sugreev and Lord Ram taking a position to go for a kill. The detailing of Mahabharat is also particularly stunning.

From Bhishma being pinned by Arjuna’s arrows to vicious detailing of the 18-day battle adorn the walls of the complex.

The churning of the sea details both Sheshnag and Hanuman involved in the celestial exercise to make ‘devtas’ immortal.

There are abandoned temples, huge where once Lord Shiva was worshipped whom the people in Cambodia also call Rudra.

(Angkor Wat temple was constructed during the reign of King Suryavarman II, who ruled from 1113 to at least 1145.)

These motifs not only co-exist with Buddhist iconography but also continue to influence the cultural life of Cambodia. The marriage ceremony involves the use of banana (fruit) which is an ancient symbol for fertility.

Even Kaleva (red thread) is used during marriage rituals. Local names are also derived from both Ramayana and Mahabharata tales but pronounced differently. Chandra is pronounced as Chantra and so on and so forth.

Even before, Hinduism got reorganized by the British Raj through law and codification of rituals, there existed a universal appeal of classical Hinduism which still finds space in cultural life of South East Asian countires.

Though Narsimha avatar is a tale which people know across North India as a fight between a devotee called Prahlad, his daitya father Hirnakashyap and Narsimha avatar of Vishnu.

It is only in South India one finds temples of Narsimha avatar and not in the North India. But you re-discover this tale in Angkor Wat.

The city was also known as Param Vishnu Lok before the Kings of Cambodia converted to Buddhism.

Hinduism as a religion is not a political force today but it is still of daily life.

Whether it is Ravan, Nandi or Bhakta Hanuman, they all co-exist with Buddhist influences. Cambodians are more aware of this heritage than many Indians.

Both these late ancient monuments show the power of India’s two most important epics which shaped many parts of the world. Both these tales continue to shape Indian politics and culture.

Walking around the late ancient temple complexes reminded me of Ayodhya in Faizabad.

Many Indians today can only relate Ayodhya to the birth place of Lord Ram.

That is one aspect of the city. It was also culturally influenced by both Jainism and Buddhism tremendously.

This has done great harm to India and Hinduism as it undermines rich cultural history.

In Siem Reap both Buddhist and Hindu influences have been illustrated for tourists.

The complex is clean and neat and habit of not littering is encouraged.

Ayodhya on the other hand is gifted with an infrastructure which only exists on papers. That should change.

I do not think that by erecting a tall statue of Lord Ram would change anything.

Some parts of the temple complex in Siem Reap have been maintained and restored by the ASI.

It makes one proud that we have contributed in keeping alive, India’s cultural contribution abroad.

Today BJP is fighting over the birth place of Ram in Ayodhya.

Today, the battle lies in the Supreme Court, but the true message is lost in the bitter political contest. God can be discovered, remembered and felt anywhere in the world. I found him in Siem Reap.