Narendra Modi 2.0 is in better position to bargain with Pakistan to shut its terror export industry 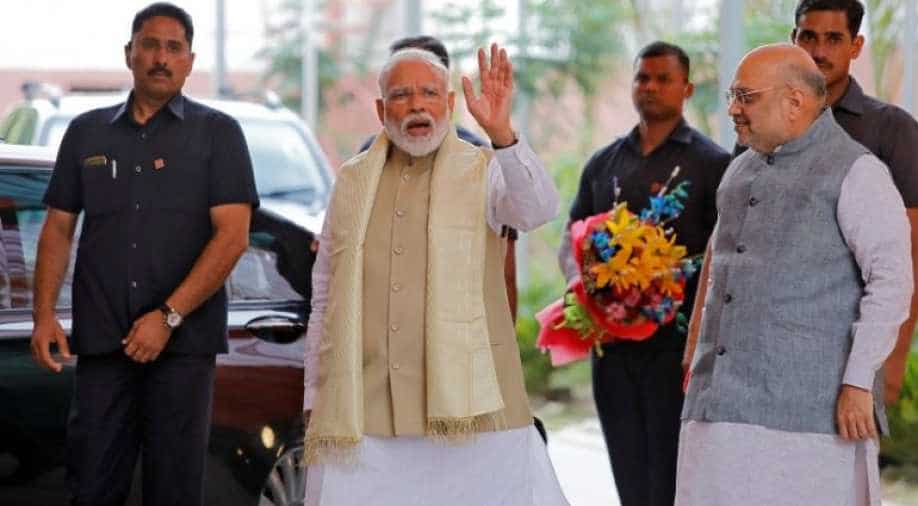 PM Narendra Modi waves to the media at the party headquarters in New Delhi. Photograph:( Reuters )

Now is when NDA government's efforts are paying off. The nailing of Masood Azhar is case in point.

Narendra Modi-led BJP won the Lok Sabha elections 2019 with thumping majority. The party won 303 seats in the 543-member Lok Sabha. The mandate was bigger than 2014 when BJP had won 282 seats on its own without any allies.

Over that phone call, Khan expressed his desire to work together for their people whereas Narendra Modi reiterated that talks and terror can't go together, and rightly so. "The Indian Prime Minister stressed that creating trust and an environment free of violence and terrorism were essential for fostering cooperation for peace, progress and prosperity in our region," a MEA statement said.

Moreover, India hasn't invited Imran Khan for the swearing-in ceremony of Prime Minister Narendra Modi for his second term. In 2014, the then Pakistani PM Nawaz Sharif had attended the swearing-in of Modi. It was a goodwill gesture, a diplomatic move. However, circumstances differ now, the tension between the two countries has escalated post-Pulwama attack.

The two nuclear-armed neighbours had reached the brink of war after a Jaish-e-Mohammed terrorist rammed into a CRPF convoy in Pulwama, killing at least 40 security personnel in February 2019.

In the last few years, the NDA government has refused several talks offers from Pakistan, urging the neighbouring country to first stop providing safe haven to the terrorists and put a halt to the proxy war against India.

Now is when NDA government's efforts are paying off. The nailing of Masood Azhar is case in point. China, which had been shielding Masood Azhar since 2009, had to give in this time when the entire world supported India's stand to have Masood Azhar put on the global terrorist list. Masood Azhar's terror tag is a big diplomatic and strategic win for India.

Moreover, the global strategic environment is not in favour of Pakistan. Also, Pakistan's economy is in bad shape owing to mounting debts and the country is still on the FATF grey list, therefore, our country is in a much better position to bargain with the neighbouring country to stop targetting India by exporting terror to Jammu and Kashmir.

Peace, prosperity and progress are important to both India and Pakistan, but diplomatic dialogues can't be resumed unless Islamabad decides to put brakes on terror operating from its soil and stop ceasefire violations across the Line of Control (LoC).

To give peace a chance, cross-border terrorism must stop.