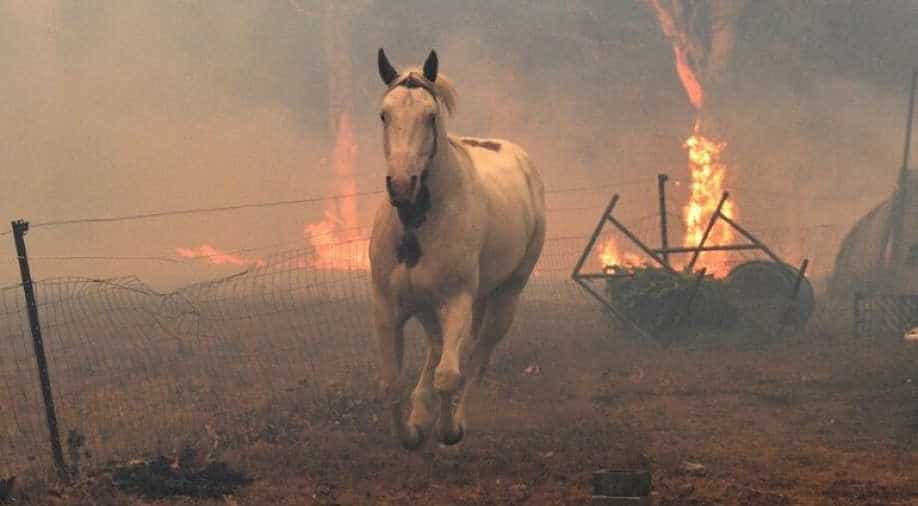 A horse trying to move away from nearby bushfires at a residential property near the town of Nowra in the Australian state of New South Wales. Photograph:(AFP)
Follow Us

Bushfires plunder lives and landscapes in myriad ways, but they often start the same way. A bright morning suddenly turns to night. Ash flutters down from the sky, propelled ahead of the roaring fire front. An awful red glow slinks over the horizon.

When I awoke in the NSW south coast town of Bermagui on the last day of 2019, I should have twigged straight away. At 8 am, the sky was a gruesome orange-black, the surrounding bush freakishly quiet. Our mobile phones had no signal. Outside, my car was coated in soot.

We knew fires were burning more than 100km up the coast at Batemans Bay, but Bermagui had seemed a safe distance away. Suddenly, it wasn’t.

Fire was bearing down on the seaside town, burning so fiercely it created its own thunderstorm. Residents evacuated to the beach after emergency text messages at 4am, but with our phone service down we’d slept on, oblivious. When my partner and I woke and worked out what was happening, we too bundled our bewildered young son into the car and fled.

Of course, amid the devastation wrought this fire season, a disrupted holiday is nothing to complain about. Bushfires have decimated huge swathes of Australia this fire season, taking with them, at the time of writing, 23 lives and more than 1500 homes.

Thousands of holidaymakers in NSW and Victoria were stranded for days in towns with dwindling food and fuel supplies. Some were forced to shelter on beaches, dodging embers and watching flames creep ever closer. And we cannot forget the animals – millions have been killed this fire season, or will soon die from lack of food or shelter.

With all roads out of Bermagui closed, we spent New Year’s Eve at a local club which had hastily been converted into an evacuation centre. Many evacuees were from the nearby fire-hit town of Cobargo. Some knew the father and son who died after staying to defend their property. Many would presumably soon discover their own homes were gone. They watched, hands over their mouths, as the club’s giant plasma screens beamed images of their once-charming town, now a jumble of rubble and corrugated iron.

We lay our doonas down between rows of poker machines and lined up for dinner with hundreds of other evacuees. Food supplies in the town had already run short – the shelves of the local Woolworths were all but empty. To feed the hordes, volunteers began rationing dinner portions to just half a sausage and a slice of bread. They had no idea where tomorrow’s meals would come from.

All this raises inevitable questions. To what extent is climate change driving these fires, and how much of that is Australia’s fault? Do we need a permanent, paid rural fire-fighting force to deal with this “new normal”? Are our fuel, food and communications systems resilient enough to cope with these disasters? And how do we cope with the deep anxiety these fires provoke, on both a personal and societal level?

Over the coming days and weeks, The Conversation will examine the tough issues emerging from this crisis. Our authors, experts in the field, will cut through the political spin and information barrage to help you understand this national disaster, and what it means for our future.

Today, the University of Tasmania’s David Bowman examines whether it’s time to ditch the traditional summer holiday, when thousands of people head to bushy areas in peak bushfire season. And while the fires absorb our attention, Monash University’s Neville Nicholls reminds us that cyclones, floods and heatwaves are also likely this summer.

On New Year’s Day, the wind having blown the fires away from Bermagui, officials opened a road out. They warned us to leave before conditions changed again. We had just under half a tank of diesel, and neither Bermagui nor the next town, Tarthra, had supplies. We drove on. No diesel at Bega either, until a local told us of a truck station on the outskirts of town where we filled up.

The trip home was slow and smoky, and phone reception patchy. It struck me how vulnerable we are to technology and transport systems that can so easily shut down. We tried to buy a paper map in case of detours, but no service stations stocked them.

Our three-year-old son grasped little of what was happening. I suggested a game of I-Spy, but it was soon abandoned – the smoke meant there was nothing much to see. We drove through blackened landscapes where sheep wandered paddocks with the wool burnt off their backs. My son, sensing the mood, asked why his dad and I were so quiet.

In the days after we arrived back in Canberra, air quality was more than 20 times above hazardous levels. Shops and swimming pools were closed, and mail deliveries were cancelled. A woman reportedly died from respiratory distress after exiting a plane to a tarmac filled with smoke. Babies were born into smoke-filled hospital theatres; their parents despaired at what the future holds.

When the immediate threat of these fires has passed, many bigger questions will remain. The Conversation will continue to bring you the responsible, evidence-based journalism you need to be properly informed. Thank you for your continued support.