India is emerging as an important producer of counterfeit goods 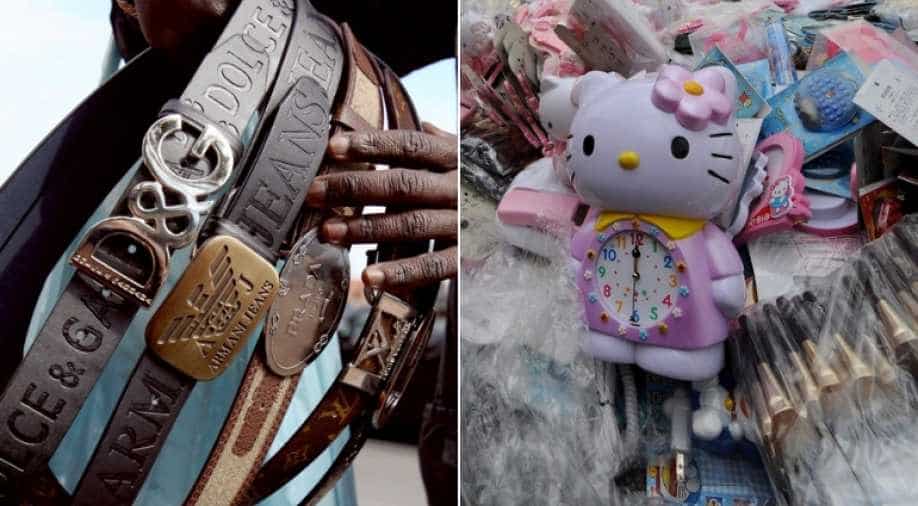 Based on 2016 data, an updated report jointly released in the third week of March, estimated that the volume of global trade in counterfeit and pirated products could amount to as much as a whopping $509 billion

The sale of fake or counterfeit goods the world over has seldom been as brisk as today, with the proliferation of digital platforms through e-commerce.

It has made transactions easier and free from the clutches of customs, crossing borders without any difficulty.

It is no surprise that the US President signed a memo earlier this month seeing details on how the country could better track the growth of spurious goods across the world. According to estimates, the value of counterfeit goods may touch the $500-billion-a-year mark with about 20 per cent of this trade violating US intellectual property.

Although no precise figures about the sale of such trade in fake goods exist, Paris-based intergovernmental think tank, the Organisation for Economic Cooperation and Development (OECD), undertakes a periodic study in concert with the European Union Intellectual Property Organisation (EU-IPO) to arrive at credible numbers.

Based on 2016 data, an updated report jointly released in the third week of March, estimated that the volume of global trade in counterfeit and pirated products could amount to as much as a whopping $509 billion. Even as this constitutes up to 3.3 per cent of world trade, it excludes domestically produced and consumed counterfeit and pirated products or pirated digital products being distributed via the Internet.

The previous OECD/EU-IPO study estimated that in 2013, up to 2.5 per cent of global trade worth $461 billion was in counterfeit and pirated goods. The point to note is that between 2013 and 2016, the share of global trade in counterfeit and pirated goods grew very significantly, even when world trade logged a relative slowdown!

The joint study warns about the rise in the intensity of counterfeiting and piracy, “with significant and potential risk for intellectual property (IP) in the knowledge-based open and globalised economy”. Interestingly, the study traces the dramatic sale of counterfeit and pirated goods from virtually all economies in all continents, with China and Hong Kong as the biggest conduits.

In addition, several Asian economies, including India are also important suppliers of counterfeit products, despite a role that is significantly lesser than China’s.

The key transit points for ten main sectors that are particularly vulnerable to counterfeit, span a wide range of IP-intense, tradable items - from fast-moving consumer goods such as foodstuff or cosmetics to business-to-business products such as spare parts and computer chips.

Sadly, fake products such as contact lenses, pharmaceuticals or baby formulas are continuously being fed to markets through multiple channels, including digital platform vendors at a volume unmatched by offline outfits.

It is equally sad that the degree of consumer deception is still the highest for these classes of products, posing a peril to the personal health and safety of consumers. Fake goods are dispatched in large quantities in containers and in small parcels by post or courier services. The report listed several West Asian economies - Saudi Arabia, the United Arab Emirates and Yemen -- as important transit points for sending counterfeit goods to Africa.

Four other transit points -- Albania, Egypt, Morocco and Ukraine -- are of particular significance for redistributing fake goods in the EU, while Panama is a vital conduit for fakes to the USA.

Highlighting the shortcomings, OECD said lamentable gaps in governance, especially high levels of corruption and lacunae in IP rights enforcement, boosts trade in counterfeits.  It singles out the existence and proliferation of free trade zones (FTZs) or special economic zones (SEZs), which give a strong impetus to this parallel trade in economies with weak governance, high corruption levels and a lack of intellectual property rights enforcement.

China and India have plumped for such exclusive enclaves in recent years! Though these special zones are designed to benefit trade in general, such as good logistics facilities, it is the misuse of these amenities that could result in higher flows of trade in fake goods.

Rightly, the study cautioned that as the lightly regulated zones are lucrative for parties in illegal and criminal activities, the continued growth of such zones makes an important context and an alibi for such nefarious activities. As for India, the study mentions it is also emerging along with other Asian neighbours, as an important producer of counterfeit goods.

Trouble is such a dubious reputation affects domestic consumers too. A perfunctory click of the mouse shows that metro cities including Delhi, Mumbai, Bengaluru, Kolkata and Chennai throb with spurious goods, where replicas of luxury goods are available at one-fourth of the price! For the hapless consumers, counterfeit is dangerous to health, safety and privacy, besides lowering consumer satisfaction, particularly when low-grade fake goods are purchased unknowingly.

The existing legal provisions from the Trademark Act and Copyrights Act in India are not sufficient deterrent to the band of organised counterfeit racketeers. The punishment for contravention of the rules of the game ought to be cognizable and non-bailable, as enshrined in the provisions of the Indian Penal Code.