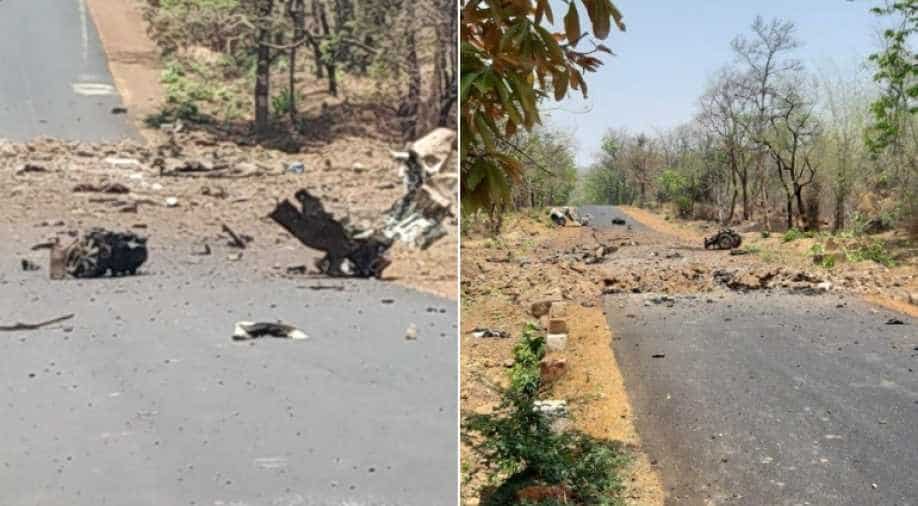 The blast was executed by Naxals on a police vehicle which was carrying 16 security personnel. Photograph:( ANI )

Maoists use terror tactics as deadly as jihadi suicide bombers.

May 1 is observed as Labour Day in several parts of the world. It is also celebrated as Maharashtra Divas to commemorate the foundation of the state fifty-nine years ago. On this day, right in the middle of the world’s greatest general elections, Leftist extremists, better known as Naxals or Maoists, once again sent a grim and ghastly reminder of their power and presence in India’s most backward and tribal regions. Fifteen commandos of the Quick Response Team (QRT) were blown up by an improvised explosive device (IED). They were travelling in a private vehicle on the Kurkheda-Korchi road in north Gadchiroli, Maharashtra, a district bordering Chhattisgarh and Telangana. Their civilian driver was also killed.

What is noteworthy is that this was the second strike in a span of 24 hours. The previous night, Naxals torched some thirty-five vehicles nearby. This was possibly a trap to lure the QRT commandos to the site where a ghastly ambush awaited them. Most of the destroyed vehicles belonged to an infrastructure company contracted for road works at the Purada-Yerkad sector, National Highway 136. No surprise that Leftist-extremists are so dead set against development. The vehicles were incinerated towards the end of the week-long first-anniversary protest of the killing of 40 extremists by security personnel last year on April 22. But, the blast that killed our commandos was a blow far worse and more damaging than the loss of property. Left extremists use terror tactics as deadly as jihadi suicide bombers. The Gadchiroli massacre not only echoed the Sri Lankan Easter Day church massacre, but also, ironically, the start of the satirical movie Newton, which begins with an election-time explosion.

Why are Maoists succeeding against the state despite decade-long efforts to eliminate them? There are two reasons. The first is that they have managed to capture, whether by brainwashing, blackmail or brutal violence the hearts and minds of some of our most deprived and exploited Adivasi (indigenous) and Vanvasi (forest-dwelling) citizens. These folks have been neglected, abused, and oppressed for centuries by colonial, national, or local elites. The fruits of development have hardly reached them, whether better roads, schools, electricity, water, or medical facilities. Now, they are told that their forests and natural resources are also being sold to predatory capitalists in the name of progress and prosperity.

Captured by this powerful narrative, a small section of our neglected populace has been used by Left revolutionary insurgents against the state. What makes tribal Maoists formidable opponents is that they can persist on almost nothing in areas that are so deeply forested or remote as to be impenetrable to the more modernised and so-called civilised state-security forces. Moreover, tribal solidarity, cultural practices, information-gathering and sharing, and other survival mechanisms are beyond the normal or expected parameters. While other sectors of the Indian society have realised that both communism and insurgency are doomed to fail, such understanding has not yet clearly dawned upon some of our Maoist tribals.

The second reason why Leftist insurgents manage to kill our better-trained and equipped security forces is that they rarely engage in direct combat. Instead, they use IEDs and other remotely detonated explosives. It was in such an explosion that Bheema Mandavi, BJP MLA, was killed a few weeks earlier. We now know that a variety of such lethel stratagems including radio-controlled, victim-operated or wire-triggered explosives are used to target security forces. In addition, the better trained of the Maoists also deploy mines for foot patrols or launch rocket attacks on camps.

There are also periodic The silver lining to this dark cloud is that Leftist extremist fatalities have been steadily decreasing. From a shocking annual casualty rate over 1000 ten years back, we are down to less than a 100 this year. What is more, Gadchiroli-Chimur reported very high voting on 28 April during the 2nd phase of the Lok Sabha elections. A whopping 71.58 per cent of eligible voters exercised their franchise. There is little doubt that with adequate political will and sufficient deployment of resources Leftist-extremism will gradually become extinct somewhat like the dacoits of Chambal. Determined action, both at the state and national level, is imperative.

This the current dispensation as opposed to earlier regimes, seems to have demonstrated in ample measure. In addition, if the benefits of progress also reach our Naxal-infested regions, this menace is bound to be a thing of the past.lapses on part of the security forces themselves, whether in intelligence gathering or in neglecting standard operating procedures. The resultant loss of life and limb is incalculable, especially considering how much effort and expense are invested to create and train even a single commando, who becomes a valuable national asset.