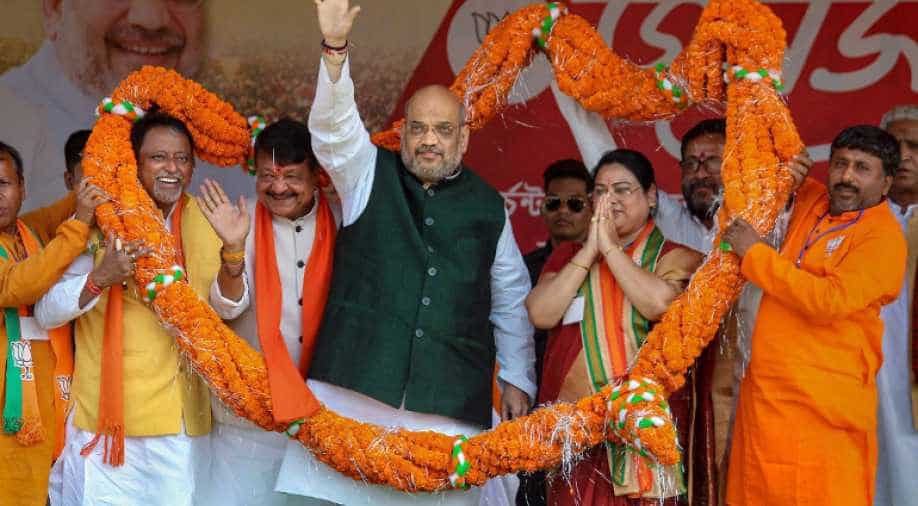 BJP has emerged as a relevant fighting force in Odisha, West Bengal, south and Northeast India

One of the biggest surprises of the 2019 elections will be BJP’s expanding footprints in the country, in areas considered out of bounds for the party thus far.

In the last two terms as party chief, Amit Shah has worked assiduously on a strategy to take the BJP to every nook and corner of the country, expanding its electoral base. The 2019 elections are going to be a test of the success Amit Shah has achieved.

Reports from across the country clearly suggest that the BJP has succeeded in taking major strides in south and east India, areas so far known as a non-BJP territory.

It is the outcome of a series of strategic advances taken by the party president in the last five years that has transformed the BJP into a relevant fighting force in Odisha, West Bengal, Kerala, Tamil Nadu and Northeast states like Tripura, Manipur, Nagaland, Arunachal and Meghalaya.

The Northeast, including Assam, sends 25 MPs to the Lok Sabha and the BJP hopes to win up to 20 seats. In the 2014 Lok Sabha poll, a majority of the 14 Assam seats went to the BJP.

The party made a historic entry in Assam and Tripura by winning a two- thirds majority to form state governments.

In Arunachal Pradesh, the massive exodus from the Congress to the BJP, led to the formation of a BJP government in the state two years ago. Since then, the party has consolidated itself. As junior partner, BJP is part of the state governments in Manipur, Meghalaya and Nagaland.

The stunning victory of the party in Tripura in the 2017 assembly election, which ended three decades of CPM rule, created history, generating a groundswell of support for the BJP in the entire region.

Equally significant is the party’s gains in local bodies’ elections in West Bengal and Odisha in 2018 and 2017 respectively. The substantial gains have established it as the main challenger to Mamata Banerjee’s Trinamool Congress in Bengal and Naveen Patnaik’s Biju Janata Dal in Orissa.

The BJP has also gained by attracting top-ranking leaders like Mukul Roy in West Bengal from Trinamool and Jay Panda from BJD in Odisha. A large number of middle rung and local leaders of these parties have migrated into the BJP fold in these states.

The ‘Ma, Maati, Manush’ slogan in the initial stages of the Trinamool movement, generated great goodwill for the party in its bid to oust the three-decade-long Left Front misrule. Later, her politics slipped into the old CPM rut – money, muscle and Muslim clergy power.

By focussing on West Bengal for the last four years through meticulous planning, micro-management and strategy, the ground was being readied for the BJP’s emergence as a major contender. Amit Shah has made as many as two dozen trips to Bengal to organise and inspire the cadre in the last three years.

The BJP strategy in south India has varied from state to state. In Karnataka, the party always had a good base. It hopes to improve upon its tally of 18 in 2014. In Tamil Nadu, the BJP strategy was to cobble up a coalition of like-minded parties under the leadership of AIADMK. The coalition has worked well and is expected to put up a formidable challenge to the DMK front, winning half the seats in the state.

It championed the believer’s cause effectively to transform itself into a party of the masses. The BJP president, by making a number of trips to Kerala and challenging Chief Minister Pinarayi Vijayan's pro-atheist, anti-Hindu stand, has consolidated public sentiment in favour of the party.

The state BJP was clueless about its options till Amit Shah emerged on the scene, guiding the party to take an openly pro-devotee stand on the issue. His appeal electrified the cadre, making the BJP take to streets with a vengeance.

Over 50,000 cases were filed against BJP workers by the CPM government, but this has turned the tide against the CPM. It is this dip in the CPM support base that is likely to help BJP emerge as the new third force in Kerala.

Whether it makes electoral gains here or not, the party is a major political option for voters fed up with the alternative communal politics of the UDF and the LDF.

The BJP aims to gain as many as 80 seats in the new areas in 2019, so that any shortfall can be compensated. Thanks to Amit Shah’s vision, the BJP today is a pan-Indian force, not dependent only on the catchment areas to win seats.

These huge additions from the new areas, is bound to change politics for ever in India. Like the Congress of the 1960s, the BJP today is the party of power, in almost every state. And the credit for making it goes mainly to Amit Shah. Narendra Modi’s all India appeal and charisma has, of course, made the job easier.