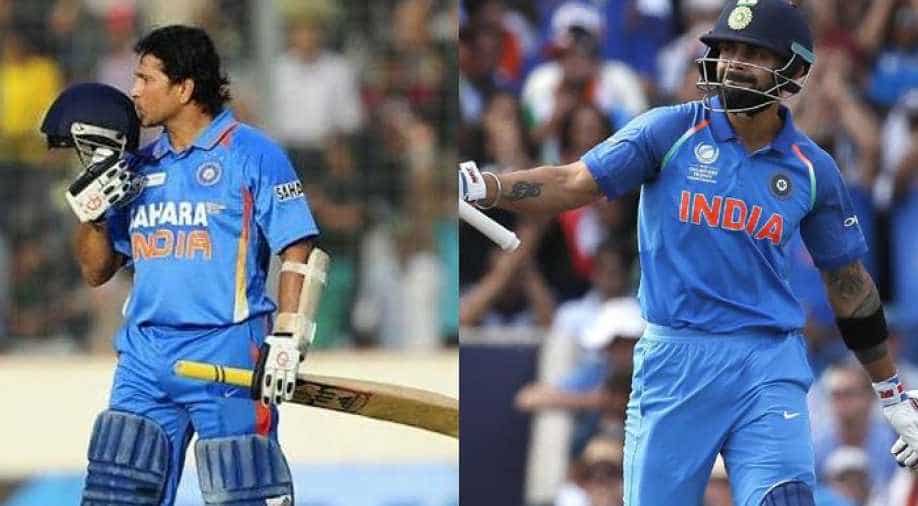 Both have given the game a different perspective, a fresh way of thinking and have taken the art of batsmanship to another level. Virat and Sachin, in fact, are two sides of the same coin.

There is no final answer to the never-ending debate - who between Sachin Tendulkar and Virat Kohli is a better batsman?

Veterans like Ian Chappell and Jeff Thomson said this year that Sachin was great but they found Kohli tougher, consistent and better match-winner than Tendulkar.

It would not be reasonable to compare two extraordinary players who played in an alternate time periods.

If we reduce the comparison to just numbers then via statistics Kohli definitely looks better than Sachin on records.

On October 24, Virat Kohli broke Sachin Tendulkar’s record to become the fastest batsman to score 10,000 runs in One Day International cricket during his not out 157 against West Indies.

It took Sachin 331 innings to score his 37th-century whereas Kohli reached the milestone in his 205th ODI innings.

Sachin Tendulkar's batting average in ODI cricket is 44.8 and Kohli is scoring with an extraordinary average of 59.83.

Kohli is way ahead of Tendulkar in most parameters based on numbers but for a fair and appropriate comparison, we will have to understand the situation and strength of their teams they played with.

Since his debut till 2001, Sachin was the only consistent performer of Indian batting line up. He was dragging an underperforming team with his tremendous skills.

"Switch the TV off when Sachin would get out' was one unwritten rule of the 1990s which shows the strength of our batting line up that time.

And on the other hand, Kohli has spent almost all his initial ten years in a team that has dominated the world cricket.

Tendulkar did not have the luxury of good support in the 1990s as India was heavily dependent on him. Kohli has had better support throughout his career.

After India defeated Sri Lanka in 2011 World Cup Final, Virat Kohli who carried Tendulkar on his shoulder himself said, "Sachin Tendulkar has carried Indian cricket on his shoulders for 21 years. So it was fitting that we carried him on our shoulders after this win".

Any good analyst will place Sachin Tendulkar above Kohli, because the kind of bowlers he faced were better than what they are now.

The era Sachin played in had the best teams, fast bowlers and spinners.

But Kohli's fitness and his increasing consistency in chasing and match-winning abilities make him unmatched in world cricket.

Sachin played in a different era with different challenges, meanwhile, Kohli plays without the dominating presence of big stars, therefore, it will be better to celebrate their performances as a contribution to the team then to compare them.

Both have given the game a different perspective, a fresh way of thinking and have taken the art of batsmanship to another level. Virat and Sachin, in fact, are two sides of the same coin.