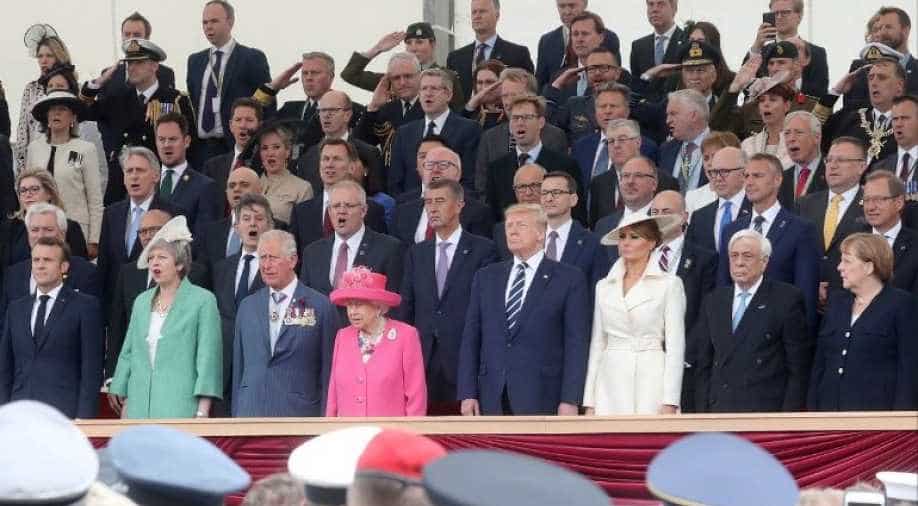 Merkel hailed D-Day as the 'unique military operation that eventually liberated Germany from the Nazis.'

It was a mixed feeling of sentiment, pride and togetherness as leaders of 16 nations commemorated the 75th anniversary of the D-Day in the English city of Portsmouth.

There was nothing surprising about Merkel's presence at the event which commemorated the allied victory over Nazi Germany.

Merkel had been a regular at D-Day anniversaries. While leaders of allied nations hailed the bravery of their combined forces, the German Chancellor expressed gratitude for being invited to the ceremony.

Merkel hailed D-Day as the “unique military operation that eventually liberated Germany from the Nazis.”

But things were quite different 15 years ago when a German Chancellor attended D-Day anniversary for the first time.

Allied veterans had objected to former German Chancellor Gerhard Schroeder being invited to the 60th D-Day commemoration in France's Normandy in 2004.

But for both France and Germany, Schroeder's attendance was a sign of changing times and reconciliation in Europe.

Merkel's words resonated with what her predecessor said back then. Schroeder had called D-day "a victory not over Germany but a victory for Germany."

Schroeder had also paid tribute to Allied as well as German soldiers who were laid to rest at the Commonwealth Cemetery of Ranville in Normandy.

But he skipped a visit to the nearby Le Cambe cemetery, where over 21,000 German soldiers belonging to the Waffen-SS unit were buried.

The SS among its many infamous activities was responsible for the mass killing of Jews during the Holocaust.

On June 6th, 1944 Allied forces including those from the US, UK and Canada landed on the beaches of Normandy. The largest seaborne invasion in history would eventually bring down Adolf Hitler's empire in France and later Western Europe.

Merkel, who became only the second German leader to attend Normandy Landing remembrance in 2014 and Schroeder belonged to a generation of Germans who had no memory of the Second World War which ended in 1945.

Schroder was a year old when Germany surrendered while Merkel was born after the war, in 1954.

But D-Day events brought back discomforting memories for German leaders who had witnessed the war.

In 1994, France had avoided inviting then German Premier Helmut Kohl for the Normandy invasion anniversary.

Kohl had said that there was no reason for him "to celebrate a battle in which thousands of Germans died miserable deaths."

The D-Day was a deeply personal matter for Kohl who was a teenager in 1944. His own brother died during the Normandy invasion.

But Kohl later softened his stance on D-Day amid Germany's improving ties with France.

The post-war order was once again reflected in Merkel's remarks who said that "D-Day set in motion the reconciliation process that brought lasting peace to Europe."

On the D-Day's 75th anniversary, nations including Germany signed a declaration in Portsmouth. The world leaders pledged that they will stand together to protect peace and stability.

However, the proclamation had generated little interest. Cracks in the alliances have been quite visible. UK has been in the process to leave the European Union.

Germany and France have been at loggerheads over top European Commission posts.

US President Donald Trump had complained that the European NATO members are not making enough contribution to the alliance.

The world leaders now have different issues to mend for.