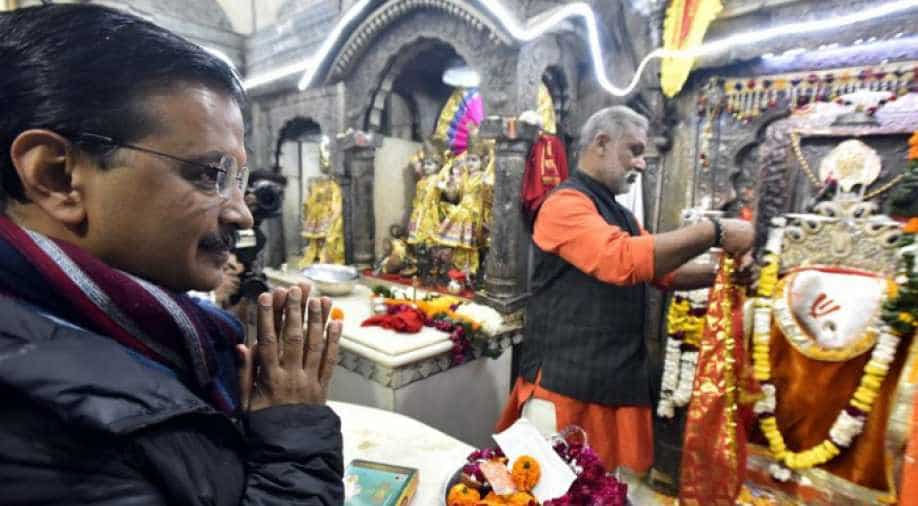 People of Delhi responded to the policies of Arvind Kejriwal and his consistent message of development.

It is not without significance that Delhi’s chief minister Arvind Kejriwal ended his victory acceptance speech by thanking Lord Hanuman and loudly shouting Bharat Mata Ki Jai, Vande Matram and Inquilab Zindabad. One can say that a significant shift in Indian politics has taken place.

From competitive minoritism, politics has moved to competitive Hindutva where different shades of ideology are available in political market and politicians, even if profoundly secular, have ensured that they do not get accused as anti-Hindu in the political discourse.

This indeed is a new reality of Indian politics which today stands internalised by the non-BJP parties as well. Many experts would say that it is tactical in nature, but the fact remains that Kejriwal publicly acknowledged it.

Delhi’s results can be divided neatly into four parts.

First, AAP’s campaign was positive in nature and all-inclusive. AAP refused to become part of BJP’s vicious campaign to polarise the electorate. AAP avoided the trap. Arvind Kejriwal neither went to JNU nor Jamia. He extended his support to the students but never became part of the protest. In fact, one can say that life came a full circle in Indian politics. BJP supported Anna Hazare’s campaign against BJP but did not overtly adopt it. BJP won a handsome mandate in 2014. AAP, on the other hand, supported the students of JNU and Shaheen Bagh, but did not adopt the campaign. The verdict of the 2020 Assembly Elections speaks volumes about it. What is even more important is that unlike Rahul Gandhi who got accused of soft Hindutva, no one seemed to have mind Arvind Kejriwal’s recitation of Hanuman Chalisa during the campaign.

The second important aspect was the complete failure of BJP’s politics of nationalism and polarisation. BJP can take consolation in the fact that they were able to increase the vote bank, but it could not translate into numbers. BJP got a massive drubbing. Despite deploying a number of ministers, BJP did not catch the imagination of the public. BJP has been out of power in Delhi since 1998.

This is the 5th election which BJP has lost in Delhi. BJP has swept Delhi twice during Lok Sabha elections, but failed in Assembly Elections. It raises the question as to why BJP tried to use national issues to fight local elections. BJP could not win previous state elections despite raising issues like abrogation of Article 370 and CAA. BJP tried to use Shaheen Bagh as an object of polarisation but failed to do so. The primary reason was that the protesters at Shaheen Bagh were using the constitution as a symbol of protests and did not allow the slogans to become overtly religious. BJP did consolidate its core vote and gained but could not replace the imagination of Kejriwal who fought elections on civic issues. In fact, results mark the homecoming of Bijali Pani issues in electoral politics. People of Delhi responded to the policies of Kejriwal and his consistent message of development which BJP could not counter. BJP also did not have a chief ministerial candidate which added to the problem.

The third aspect of Delhi’s election is the return of the regional parties. BJP swept state after state post-2014 Lok Sabha elections. BJP seemed invincible. After 2019 results and abrogation of Article 370, experts believed that it would be next to impossible to hold back BJP. But then came the shock - BJP fell short of a majority in Haryana and Shiv Sena ditched them in Maharashtra. Shiv Sena eloped with Congress and NCP, and consequently, BJP had to rope in JJP which ran a vicious campaign against BJP.

Even in Jharkhand, BJP lost the elections. It is for this reason that results in Delhi become important. Instead of Congress, regional parties have emerged as a bulwark against BJP in national and state politics. For the next two years, BJP would be duelling with regional satraps in state elections. Be it the case of Bihar, West Bengal or Uttar Pradesh, the biggest national party Congress is in no position to defeat BJP. On the other hand, regional satraps like Kejriwal, Mamta Banerjee, Jagan Mohan Reddy and K Chandrashekhar Rao have emerged as big players. Even Udhav Thackery can be counted in the same league despite running a coalition government with NCP and the Congress in Maharashtra. During the 1970s, no national party could match Indira Gandhi’s might. Regional parties had to come together, merge and create something bigger to stop Indira Gandhi.

Lastly, Delhi’s elections also show the death of Congress in India’s capital. It also demonstrated the irrelevance of Nehru-Gandhi dynasty. Congress is not only a spent force in this election, but it has also become irrelevant in the scheme of things. This also casts a shadow on Rahul Gandhi’s leadership potential once again who has been trying to get back at helms of affairs. Delhi’s results will impact the ability of the Congress to manoeuvre regional parties in Rajya Sabha in the second part of the Budget Session where the important bill would be tabled. So, the question is can Congress reinvent without Gandhis? Can Delhi show the way to the Congress leaders and push them to take the courageous step to create new and vibrant Congress without Gandhis. These are the questions which congress must address.

To sum it up with a joke on Twitter: BJP = Ram Mandir, AAP = Hanuman Mandir and Congress = Old Mandir.