Relax. Omicron isn’t going to take down the economy. 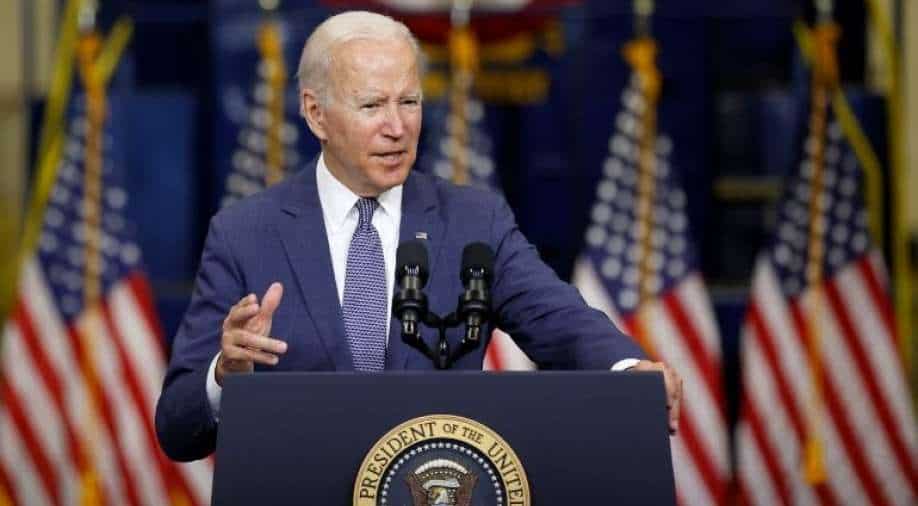 US President Joe Biden addresses COVID-19 Response Team on developments related to the Omicron COVID-19 variant from the State Dining Room at the White House in Washington Photograph:( Reuters )

THE ECONOMY IS BETTER POSITIONED TO ABSORB THE DAMAGE OF EACH SUCCESSIVE WAVE OF THE VIRUS.

Covid-19 continues to call the shots in our economy. This past summer, the Delta variant slowed growth and juiced up inflation. After Delta receded, growth rebounded. With the Omicron variant now spreading across the globe, the next few weeks will give us a sense of how much economic peril lies ahead.

While today’s Consumer Price Index report showed inflation rose in November to 6.8 percent for the previous 12 months, there’s compelling evidence that inflation has peaked. Even with the risks of Omicron and other variants to come, there’s reason for optimism that the economy will return to full employment with comfortably low inflation by this time next year.

Booming holiday sales are a clear sign of the economy’s resilience. So far, sales couldn’t be better. It is almost certain that spending on holiday gifts will increase at a double-digit pace over last year (a none-too-shabby year for sales in its own right). Some of the sales strength reflects higher prices. But even after inflation is accounted for, this holiday season may end up among the best, if not the best, ever.

American families should let loose this holiday season. Why? For one thing, a quickly improving job market that has created well over half a million jobs a month this year. If this pace holds, by this time next year, the economy will have regained all the jobs lost during the pandemic, plus those that would have been created if there never had been one.

Given the near-record number of open job positions, there is good reason to think that businesses will continue to add aggressively to their payrolls. The unemployment rate has been falling fast and will soon be back, consistent with a full-employment economy.

Most families — particularly those with higher incomes — have socked away extra savings during the pandemic. This partly reflects the prodigious government support, from stimulus checks to extra unemployment insurance, for those hit hardest by the pandemic.

The savings also reflect that, to avoid getting sick, many Americans have forgone spending on travel, eating out, attending ball games and concerts, commuting and dry cleaning. These extra savings of about $2.7 trillion amount to more than two months of after-tax family income.

Then there’s the parabolic increase in the value of every asset we own. House prices surged to new highs from coast to coast. Stock prices have posted records all year. The increase in cryptocurrency prices is stratospheric. Those two-thirds of Americans who are fortunate to own their homes, the half who own at least some stocks and the most intrepid among us who own crypto have never been wealthier.

Despite all of this, many Americans feel pessimistic about the economy. Consumer sentiment, a measure of how people are feeling about the economy and their own financial situation, has slumped badly since Delta. One prominent sentiment survey is as weak as it has been since the pandemic first hit.

The problem is the surge in inflation. Consumer price inflation in November accelerated to its highest pace since the runaway inflation of the early 1980s. The price of nearly everything, from a tank of gasoline to a jar of peanut butter to rent, is up a lot. Many Americans have never experienced high inflation — and it is unnerving.

But the worst of this inflation may well be behind us. After the costs of fuel and food — which can fluctuate greatly — are excluded, inflation in November rose to 4.9 percent for the previous 12 months.

The cost of gasoline and heating homes, among the biggest contributors to the high inflation in November, have already come down in the weeks since. And they are set to fall more, given the recent decline in oil prices, as global oil suppliers continue increasing production

Nothing tends to color consumer perceptions of inflation more than gasoline prices. If history is any guide, if those prices fall, sentiment should improve.

What about the aftershocks from the Delta wave?

Prices for goods that surged when the Delta wave scrambled global supply chains are also set to decline as those chains slowly sort themselves out. Shipping rates remain high but are down from just a few weeks ago. Far fewer container ships are stuck waiting to offload their goods at the Port of Los Angeles and the Port of Long Beach.

The vehicle industry has been the poster child for supply chain problems. Delta contributed to the closure of semiconductor plants in Asia, creating a severe shortage of the chips needed to produce cars and sending the price of cars skyrocketing. But Washington is considering measures that could ramp up domestic manufacturing. That could help bring vehicle prices back to earth next year.

Another factor that should take the edge off inflation: the easing of the acute labor shortage. This shortage has led to runaway labor costs for lower-wage, lesser-educated and younger workers in service businesses that reopened en masse with the Covid vaccines. Many of these workers lost their jobs in the pandemic and have been slow to come back, since they are particularly at risk of getting sick. At the height of Delta, millions of people said they weren’t working because they were sick with Covid-19, taking care of someone who was sick or fearful of getting sick.

But as Delta has receded, people are returning to work. The labor force participation rate for younger people and high school graduates with no college surged in the most recent employment statistics. And many more may soon return to work as they quickly spend down the remaining financial support they received from the government. As workers fill the still considerable number of open positions, wage growth should moderate, as will the pressure on businesses to raise prices.

To be sure, Omicron or future variants of the virus could upend this optimism. But I expect each new wave to be less disruptive to the health care system and economy than the previous one. If populations continue getting vaccinated and taking their booster shots and new antiviral medications and therapies become available, this should help ensure that while many more people will get sick, there will be fewer hospitalizations and deaths.

Businesses, too, are increasingly adept at adjusting to the virus and will be less likely to significantly disrupt their operations when the next wave hits. Those in the supply chains are devising bottleneck workarounds, such as 24/7 seaport operations, that will ensure the chains don’t break again.

The next wave of the virus will undoubtedly slow growth and fan inflation. But as each wave fades, the recovery will quickly revive, and inflation will moderate; this has been our experience for nearly two years.

Yes, the pandemic could take us down a darker path. But there is no reason to expect that it will.