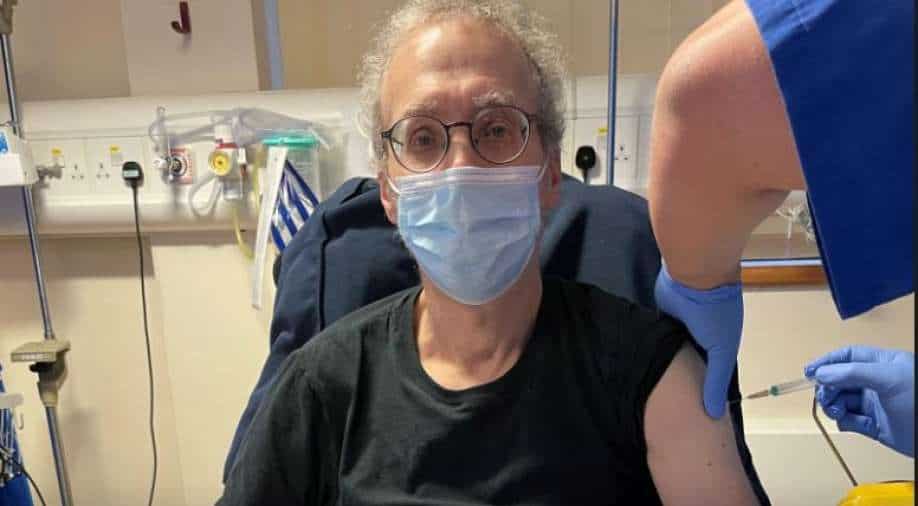 I experienced no symptoms after the first shot, which I received in late October. But immediately following the second injection three weeks later, there was mild swelling where the needle had pierced my upper right arm. A small, pink circle quickly formed around it.

The subject line on the email I received last week said simply, “Test.”

It contained the results of a private blood test I had undergone the day before. I opened the attachment with excitement and some trepidation - I believed it would likely reveal whether I am already vaccinated against COVID-19, or if I received a placebo.

As a volunteer in a late-stage clinical trial for an experimental vaccine for COVID-19, I had already received two injections. I knew when I signed up there was a 50-50 chance I’d either get a vaccine made by an American company called Novavax – or a salt-water solution used as a control to see if the real thing works. A friend joked that might protect me against drowning, but nothing else.

I experienced no symptoms after the first shot, which I received in late October. But immediately following the second injection three weeks later, there was mild swelling where the needle had pierced my upper right arm. A small, pink circle quickly formed around it.

A nurse carefully measured the redness and took notes. Two doctors were called in to take a look. They eventually sent me home and asked me to contact the clinic if I experienced any pain or signs that it had become infected. That didn’t happen.

Two weeks later, I returned to the clinical research facility at King’s College Hospital in south London for a scheduled blood test. I showed a doctor how the skin around the injection site was still black and blue.

“Looks like you got the real thing,” he said, to my surprise. He noted that several other volunteers had experienced similar symptoms, although he added it was still possible I had received the placebo.

As it happened, that morning the United Kingdom became the first western country to approve a COVID-19 vaccine. It is made by Pfizer Inc and German partner BioNTech, which have reported that it was 95% effective in clinical trials. It has since been authorized for use in several other countries, including the United States.

My feelings about the doctor’s comment were mixed. While the Novavax vaccine is considered very promising based on early results, its efficacy isn’t expected to be known until early next year. Who knows how effective it’ll be? Yet knowing I might already be protected against a potentially deadly virus seemed a relief. For starters, I might finally feel safe enough to visit the wonderful pub behind my house for the first time in nine months - wearing a mask, of course.

An email I received from the UK’s National Health Service – “INFORMATION FOR PARTICIPANTS IN LIGHT OF NEWS ABOUT Pfizer-BioNTech COVID-19 VACCINE” – basically confirmed that people who received the placebo would be able to get the approved vaccine once it was offered to them. Volunteers will not be “disadvantaged,” it stated.

This appears to contrast with some other COVID-19 clinical trials in the United States. The New York Times recently reported that some volunteers receiving a placebo might have to wait up to two years to get a vaccine so as not to tarnish long-term results. (A concerned friend emailed me the article, writing, “I’m sure it is anything but comforting to be told you can’t get the real vaccine for 2 years because you were in a trial.” I wrote back, explaining that fortunately, that’s not the policy in the UK.) On Saturday, an official with the U.S. Food and Drug Administration told a press conference that the agency is in discussions with vaccine manufacturers about the placebo issue.

I spent the next few days debating whether I should end my suspense and try to learn for sure whether I had received the Novavax vaccine or the placebo – by taking a test to see if COVID-19 antibodies are present in my blood. The real vaccine is supposed to produce them to fight the virus so if that’s what I received, my test result should come back positive.

I had asked two doctors involved in my trial whether taking a private antibody test was permissible. They both said it wasn’t prohibited under the terms of my trial. I figured I would eventually find out if I’m already immunized, given that the U.K. rollout of the Pfizer/BioNTech vaccine has already begun, although exactly when I’ll be offered it isn’t clear.

On December 7, I crossed the Thames on a nearly empty commuter boat for an appointment at a private medical clinic. Before drawing my blood, a nurse asked why I wanted a COVID-19 antibody test. “I want to find out if I’ve been vaccinated or got the placebo in a clinical trial,” I replied. She confirmed that no one before had ever given her that reason.

The test result arrived in an email the next morning. I assumed it would be positive.

I emailed the result to a doctor at the research clinic: “I’m assuming I either received the placebo or the Novavax vaccine doesn’t work at all. (I’m assuming the former.)”

“That is interesting,” he replied. “As soon as you get offered another vaccine, let me know and I will be able to unblind you and we can find out!”

This week, there was an unexpected plot twist. I learned that the antibody test I had taken wouldn’t reveal if I’d gotten the real vaccine because it detects antibodies to a different COVID-19 protein. One would need a test that identifies antibodies to the spike protein. Who knew?

So I crossed the Thames again to visit another medical clinic that offers a different COVID-19 antibody test. This time, a nurse gave me the result after just a few minutes - negative again.

Looks like I won’t be visiting the pub behind my house anytime soon.