Opinion - Jammu and Kashmir: Marching with India on path of progress 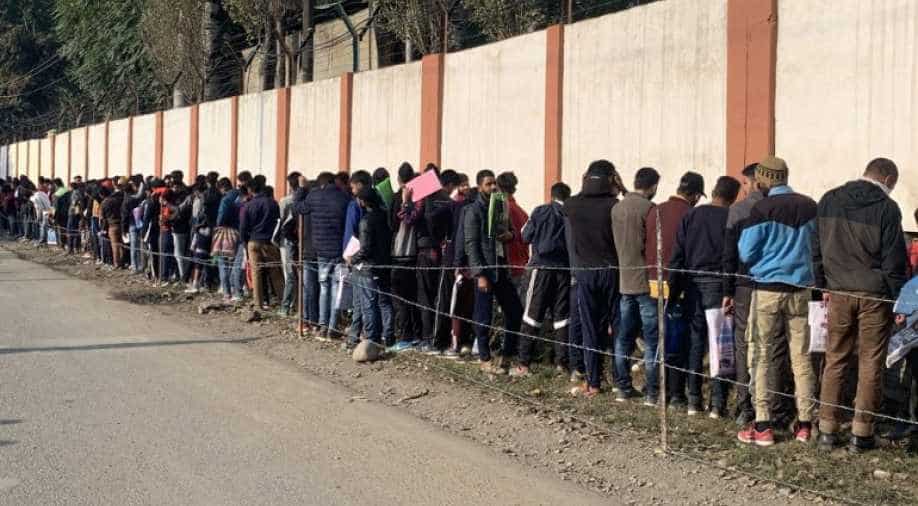 In this file photo, people can be seen standing in a long queue outside JKLI Regimental centre, Srinagar for a recruitment drive Photograph:( Twitter )

During the past two years, the union territory of Jammu and Kashmir has been marching on the path of development as a result of the government’s initiatives

A decade ago while analysing the development scenario in Jammu and Kashmir, the Planning Commission lamented the slow growth in the region and attributed it to various factors. It said the climate of armed militancy in Kashmir and low productivity in agriculture and allied sectors has impeded employment and income generation. Poor industrial infrastructure along with the poor investment climate has left the industrial sector in its infant stage.

During the past two years, the union territory of Jammu and Kashmir has been marching on the path of development as a result of the government’s initiatives, which included various developmental schemes executed under the prime minister development package focusing on individual beneficiaries and reviving long-pending projects lying dormant for several decades by removing the obstacles, through ensuring effective and transparent administration.

Both the Union and the UT governments have been leveraging technology to provide several benefits to the local population of the UT. In the field of IT, several procedures have been framed such as providing, building two large sizes IT parks (spread over half a million square feet) — one each in Jammu and Srinagar.

Among some other initiatives, the UT administration also released a real estate policy equipped with a transparent bidding process to disburse government-created “land banks” to private developers. The all-around developmental approach adopted by the J&K government has a special focus on developing a network of roads and highways only.

To ensure growth in the valley and enable the UT to come at par with the other states of the country, almost all the projects across various sectors that were ignored, have been infused with new life.

In 2015, a huge package of Rs.800 billion was allocated by the Modi government to the state government for initiating various development projects to convert J&K into a modern, prosperous and progressive place.

The benefits of abrogation of article 370 have started to trickle down to the people. After Aug. 5, 2019, the J&K government received investment proposals worth Rs.150 billion from around 40 companies from sectors like Information Technology, Defense, Renewable Energy, Tourism, Skill, Education, Hospitality, and infrastructure.

During the past two years, the J&K government has achieved 100 per cent household electrification with 24×7 power for all. Household water connections have reached 43 per cent of rural households which is double the national average of 21 per cent, and a road map has been prepared to ensure 100 per cent coverage of piped water supply to all 10816 million rural households by December 2021.

With a holistic approach for all-around human development in the UT covering crucial sectors like education, healthcare, employment generation, tourism, industrial growth among others. To provide quality education to Kashmiri children and youth, the government has established hundreds of schools and 50 new educational institutions offering 25,000 seats to students, launched scholarship schemes benefitting more than half a million students so far.

New Indian Institute of Technology (IIT) and an Indian Institute of Management (IIM) are coming up in UT. 02 All India Institutes of Medical Sciences (AIIMS), 07 new medical colleges, 05 new nursing colleges, and a state cancer institute are being constructed for better healthcare services to the J&K people.

The people of Jammu and Kashmir, especially from Valley, consciously exercised their political preference for democracy and idea of India, which encompasses, peace, pluralism, equality, terror-free right to, life and liberty, as against death and destruction inflicted by terrorists on the people of Kashmir.

The idea of India in Kashmir and plural Kashmir’s ethos is meaningless for Kashmiri society and the rest of the world unless the Exiled Kashmiri Pandits are physically repatriated back to their homeland with dignity and political-economic empowerment.

The enactment of the law regarding Zila Parishads under the Panchayati Raj system and its extension to the union territory of Jammu and Kashmir post abrogation of Article 370/35A was a great step aimed at introducing grass-root level democracy and administration. In other words, it means taking the governance to the doorstep of the people living in the remotest corner of the UT.

Though it is being done for the first time in J&K that the three-tier Panchayati Raj stands implemented, the people in the UT have responded like mature and responsible citizens and voters in the whole process of elections. The near normal and peaceful election process has added to the happy and satisfactory situation for all concerned.

An overall percentage of 50 per cent voting in the UT despite the severe cold, Covid-19 situation, and the background of the boycott politics in the valley, in particular, is not a mean achievement. Kashmiri’s are sick of ongoing terror violence for more than three decades and are longing for peace and a peaceful right to life and liberty.

They see India as a promising land of opportunities. people of Kashmir Valley have chosen democracy, the mainstream political narrative, and liberal Sufi Islamic way of life and have once again rejected the separatist rhetoric and religious extremism. New Delhi is doing its best to win the hearts and minds of people.

Kashmiris on their part have to make extra efforts to defeat terrorism and separatism and create an atmosphere for peace and a new beginning for regaining their land’s lost glory.”

Siddharth Sharma is a freelance journalist and a media facilitator based in Delhi. He has written for many platforms regarding various geopolitical issues with a special focus on the Kashmir Conundrum. His escapades into the remote locations along the Line Of Control to understand the actual ground situation is soon going to be published as a well-documented book.