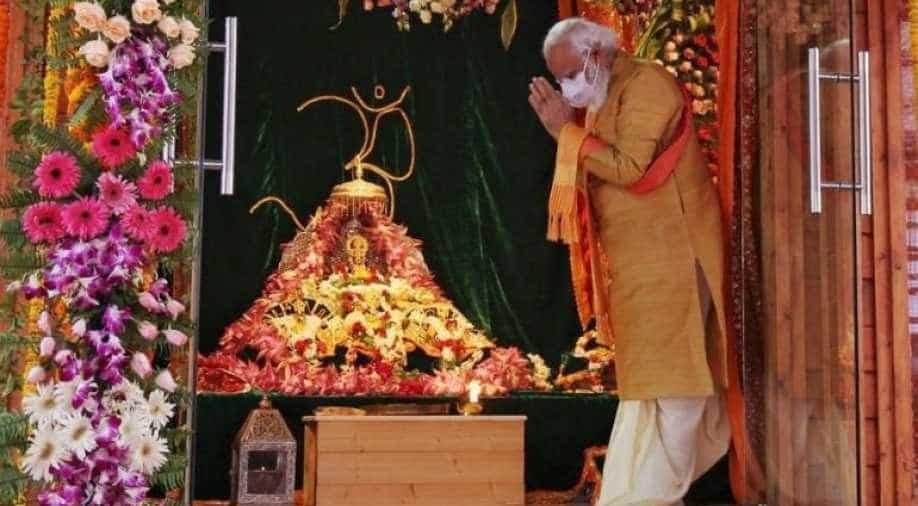 On the economic front, there have been absolutely no corruption scandals at all. Subsidies and grants meant for the poor are paid directly to beneficiaries without middle-man leakage.

Has Ram Rajya been rebooted in Ayodhya today? The great ideal of governance, the prime minister seemed to imply in his speech after the foundation laying ceremony is to be followed henceforth.

Whenever there was a departure from its exalted ideals, there have been evil consequences. Lyrical as all this is, it seems to indicate India has embraced a vision of New India that has firmly discarded the political wrong turns of the past few decades. The grand temple at Lord Ram’s birthplace is expected to be ready by 2024 when India goes into its next general election.

Meanwhile, with China being intransigent at Pangong Tso and the Depsang plain, with it surreptitious massing troops at Lipulekh and at Arunachal Pradesh, a limited war seems inevitable. China does not seem to understand that its earlier strategies and tactics are not working anymore.

India is wary and watchful for the moment but is still preparing for a successful two-front war with both Pakistan and China. The sharp conflict when it comes and it is unlikely to be more than a few months away must be decisive in India’s favour.

India has a way of being fateful in the loss of Pakistani territory. It helped Bangladesh to be born in 1971 in place of East Pakistan. The US Nixon-Kissinger administration was opposed to it and sent in the Seventh Fleet into the Bay of Bengal. But it only ensured that India did not attempt to keep any part of East Pakistan for itself or impose harsh conditions on Pakistan and its 93,000 prisoners of war at the Simla Summit between Zulfikar Ali Bhutto and Indira Gandhi afterwards.

Once again, the wheel of fortune has turned full circle, this time catalysed also by China. India could soon be liberating the original, mostly Shia inhabitants of Pakistan occupied Kashmir (PoK) and Gilgit-Baltistan. The locals have indicated that they would welcome the prospect of being part of India. The Chinese, however, are at Ladakh to try and prevent it, by padding their access areas to Siachen, Akshai Chin and indeed Gilgit-Baltistan with more salami-sliced Indian territory.

China has been concerned ever since Ladakh became a Union Territory (UT), and India began to finish a complex of pucca road links and associated facilities to the high altitude airport at Daulat Beg Oldie (DBO). And another 1,000 km of roads and tunnels, bridges all along the LAC to speed up troop and armament deployment on our side of the divide. Until the Modi regime came into power in 2014, it was only the Chinese who were doing it.

The Karakoram Pass under Chinese occupation presently is just 10 km away from DBO and China’s gateway into Xinjiang. Akshai Chin is China’s road access into Tibet. What is India thinking?

The Chinese plan in Ladakh was to intimidate and frighten India into retreat by a show of strength. But things have gone bad for them with the stout Indian response and this time America and all its allies are in diplomatic support of India.

The flagship China Pakistan Economic Corridor (CPEC), already invested with over $ 50 billion in Chinese money could be under threat from India. China wants to avoid this. Meanwhile, the US and its allies are not at all happy with China’s belligerence in the South China Sea against Japan and Taiwan not to mention Hong Kong.

India could be waiting for a conflict to break out in the South China Sea area. That would create two, or perhaps three fronts for China if it wants to come to Pakistan’s aid too.

The Malacca Straits can become yet another choke point against Chinese hegemony. In the midst of the Covid-19 pandemic, China is uniquely unpopular in the global community.

Another remarkable shift is in the positioning of New India. It has not only tackled old and intractable issues in J&K and Ladakh over the last year, but has also resolved the centuries-old problem at Ayodhya. The foundation ceremony took place exactly one year after J&K was integrated into the rest of India.

All this actual decisiveness does not conform to the smug stereotyping of the Bharatiya Janata Party ( BJP).

There is a great push towards infrastructure and communications modernisation. Defence production and greater self-reliance in this strategic sector is beginning to be taken very seriously.

Not all parts of the private sector, academia, the media and bureaucracy are hostile to the BJP led government. The public approval ratings of the prime minister have been high and unwavering through thick and thin. There is a mandate for change of the old order and it is not just electoral but also sociological.

It is a country that has evolved and seeks to consolidate its identity for the 21st century when India could well be a major global force. Modi Raj has helped people glimpse these new possibilities.

On the economic front, there have been absolutely no corruption scandals at all. Subsidies and grants meant for the poor are paid directly to beneficiaries without middle-man leakage.

There is a new surety of purpose when it comes to national interest. There is very little international preaching as was the Indian habit in earlier years. And less hankering after international approval too. Instead, India works with all sides of the fence if it suits its needs, and is quite clear it will continue to do so. The US, Britain, France, Israel, Saudi Arabia and Russia amongst others appreciate India’s new diplomatic candour.

The Modi regime has considerably upped the ante for Pakistan sponsored terrorists, killing hundreds in Indian territory. It has also struck across the LoC, first with a commando raid near Uri, and then an Air Force executed bomb strike at Balakote. Taking the battle to the enemy will now not be confined just to Pakistan.

Chinese intrusions will not be countenanced. India is taking military, diplomatic and economic measures to punish China.

China will also not be allowed to grab Bhutanese territory. In the process of the conflict yet to come, it is likely India will recapture territory stolen from it from way back in the 1950s. It could help liberate Tibet in addition to PoK and Gilgit-Baltistan. The world is watching and India is not shirking its responsibilities.

This new set of attitudes and possibilities are just one part of the Chinese nightmare concerning India, and any amount of bluster is not working to deter it.