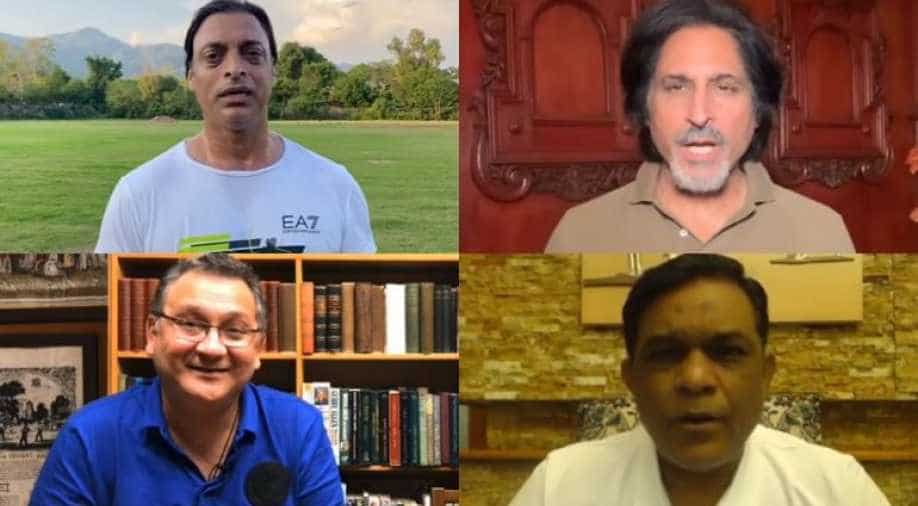 Pop quiz! What’s common between foreign policy debates on Pakistani TV and the ex-Pakistani cricketers' YouTube channels? Both have practically one fixation, India. And what’s the difference? While the foreign policy debates are an endless exercise in India-bashing, the YouTube channels are a lesson in India pandering! This has paid rich dividends for these YouTubers.

India has 10 times more internet subscribers (706 million approx.) than Pakistan (76 million). To make money on YouTube, you need to ensure that your videos get lots and lots of views. These Pakistani YouTubers also know these two facts.

Then there are channels and shows by Ramiz Raja, Mohammed Wasim, and Danish Kaneria etc. It seems, almost all ex-Pakistani players and their uncles have a YouTube channel today.

Well, on the face of it, it seems a good way to connect with fans, stay relevant and make a little money. However, their business model runs on Indian viewership.

Just scroll through the comments on these channels and you will find the majority of it coming from Indians, hence by extension, we can safely assume that majority of the subscribers are Indians as well.

First, credit where credit is due. Quality of cricket discussions on the Hindi news channels in India is absolutely the pits. It hides behind graphics and Ekta Kapoor-esque multiple shots of cricket stars.

These do a huge disservice to the Hindi heartland’s cricket fans and their deep and nuanced understanding of the game. Hence, with English discussions, which are marginally better but not easily accessible to the Hindi cricket fan, they turn to the internet.

The ex-Pakistani cricketers who have played cricket at the highest level and are untouched by English (most of them) put across the nitty-gritty of the game in a chatty, colloquial manner without compromising on the technicalities. This indeed appeals to the subscribers from India. Who doesn’t love it when Shoaib says “India ne Pakistan ki Fenti laga di”.

However, it is too naïve to just stop here. The Pakistani YouTubers have perfected the formula of keeping the Indian subscriber engaged. The secret sauce is profuse admiration of Indian cricket team and its administration and disparaging comments on the Pakistani cricketers and its administration in Pakistan. Most of these channels also are used to settle scores with the board or complaint by players about their frustrations with Pakistan cricket set up. Hence, you find an Abdul Razzak calling Bumrah a baby bowler and that he would have dominated him, ‘if’ he was still playing! Another YouTuber Tanveer Ahmed, an also-ran Pakistani medium-pacer from a decade ago, his negative and frustrated observations alone are enough to give depression to a Pakistani cricket fan. The story doesn’t differ much on other channels as well. Akhtar, Latif et al have complained at multiple times on not being offered fat jobs in the Pakistani cricket set up, of course, they don’t care for the money but to contribute to Pakistan cricket (wink, wink). Then there is the ugly, almost racist, fight between Karachi and Punjab cricketers. Bottom-line is that they are disparaging of their own cricket, their own cricketers and cricket administration. While some of it is richly deserved, there is a sense of it being overdone to offer schadenfreude to their Indian subscribers.

When another person's bad luck secretly makes you feel good, that's schadenfreude. I admit some of us do enjoy our schadenfreude at the cost of Pakistani cricket’s downfall.

As a kid of the 90s, we were at too much of a receiving end from the Pakistani cricket team, mostly at Sharjah, though now there is a lot of daylight between the two teams and that is unlikely to be made up by Pakistan in the next decade or so.

Pakistani cricket is caught up in the missing the 'good old days mode' without investing in the future. Its frustrations of losing a lot more and consistently to India does boil over. You had Imran Khan saying recently that he used to feel bad for the Indian team as his team used to beat the Indians quite often.

The facts of today cause misery, which then is translated into anger towards their own team. Not for nothing, Shoaib Akhtar’s video on Pakistani loss to India in the world cup, titled brainless captaincy has almost 10 million views, the helplessness of his explanations of Pakistan’s loss is almost sad to see. Schadenfreude. On the bright side, some of these ex-Pakistani cricketers are making money through their videos, even if that means selling out the very cricket team that made them heroes and that is perhaps why Pakistani cricket is in the slump that it is, self before the team.

The changed tunes of people like Afridi who once famously claimed that “Indians ke dil bahut chotey hote hain”; today can’t thank Indians like Yuvraj and Harbhajan enough for their contribution to his charity. Javed Miandad, father in Law to Dawood Ibrahim’s offspring, talks of peace between India and Pakistan through cricket on his videos. How the mighty have fallen!

The Hindi YouTube audience is truly now a force to be reckoned with and they are already making these ex-Pakistani greats dancing to their tunes. Pander on I say to them.