Biden thinks he can have it both ways on China. He's wrong 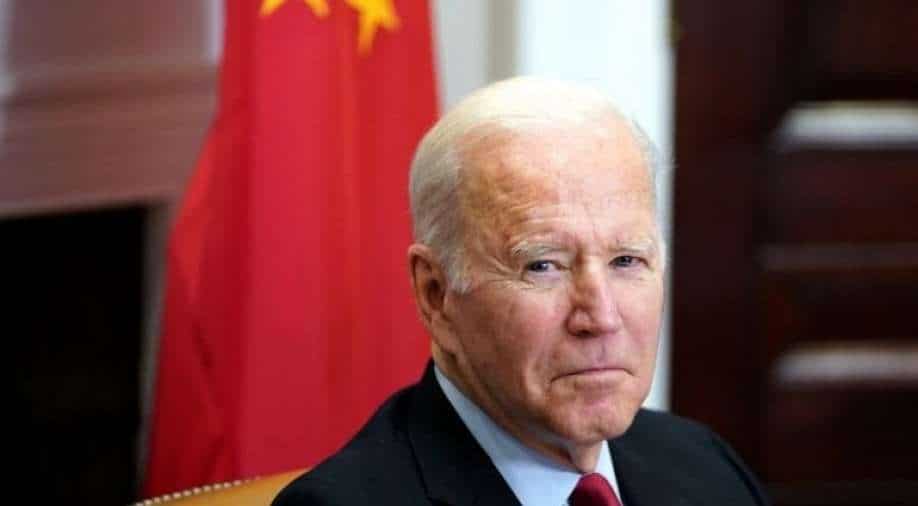 The White House is receiving backlash for having a Christmas tree worth $139,000 Photograph:( AFP )

The truth is, America's nation security depends on cooperation a lot more than competition

The choreography has been exquisite. President Biden spent his first nine months in office trying to gain leverage over China: He patched up trade disputes with America’s allies. He hosted the first-ever in-person meeting of leaders of “The Quad,” which forged deeper ties between the United States, India, Japan and Australia, all of which sit on the periphery of Chinese power. He convinced NATO, for the first time in its history, to describe China as a challenge to “alliance security.” He cajoled Congress into spending a trillion dollars to rebuild U.S. infrastructure, which he pitched, in part, as a way to counter China. Then, earlier this week, on the very day he signed the infrastructure bill into law, he held his first formal meeting with President Xi Jinping. The message was unmistakable: The United States will work with China to address common challenges while competing from a position of strength.

The strategy is clear, the execution — a few hiccups aside — impressive. But there’s a problem: Mr. Biden is trying to have it both ways. His aides insist there’s no tradeoff between treating China as an adversary and as a partner. Or, as a State Department spokesperson put it, “We can walk and chew gum at the same time.” That’s wishful thinking; the two goals collide. And for all the recent talk of better relations between Washington and Beijing, the Biden administration is still not prioritizing cooperation — although it is only through far deeper cooperation that the United States can address what menaces Americans most.

Take climate change, the single greatest long-term danger to life in the United States — and everywhere else. It should be the Biden administration’s top priority when it comes to China. But it’s not. Although the U.S. climate envoy, John Kerry, and his Chinese counterpart made headlines by signing a joint declaration on “enhancing climate action” earlier this month in Glasgow, the document was weaker than a joint statement the two governments signed seven years earlier, before U.S.-China relations nose-dived.

America’s hard line toward China undermines the fight against climate disaster in less obvious ways, too. To reduce carbon emissions, the United States must rapidly switch to cleaner energy sources like solar. The cheapest place to get solar cells is China. But the Biden administration has defended the Trump administration’s tariffs on solar technology. Some Chinese solar producers are based in Xinjiang, where Beijing brutally represses Uyghurs and other Muslims, and are thus subject to U.S. sanctions for using forced labor. But the solar tariffs are not restricted to Xinjiang. Why? Because the Biden team wants to weaken China’s hold over a prized industry. In so doing, however, it is making solar energy more expensive for Americans, which delays the United States’ transition away from fossil fuels.

It’s not just solar panels. Many green technologies will advance faster if American and Chinese researchers collaborate. But the Biden administration has maintained Trump administration visa restrictions that prevent students who attended Chinese universities with military ties from doing graduate work in the United States — even if there’s no evidence those students ever worked for the Chinese military themselves. The Biden administration is working to counter China’s mammoth Belt and Road infrastructure program when the two superpowers could more effectively fight global warming by jointly financing clean energy in poor countries. And by depicting China as a threat, Mr. Biden justifies higher Pentagon budgets — which, given the U.S. military’s status as the world’s largest institutional producer of greenhouse gasses, constitutes a climate disaster in and of itself.

If climate change constitutes the greatest security threat facing the United States, pandemics like Covid — which has killed more Americans than World War I, World War II, and the wars in Vietnam and Korea combined — come in second. There is ample evidence that U.S.-Chinese cooperation on public health saves American lives. In 2004, the Centers for Disease Control and Prevention helped China build an influenza surveillance system, which proved crucial to containing the H1N1 flu in 2009 and H7N9 flu in 2013. American public health experts went to work inside China’s own C.D.C. headquarters, which gave the United States greater insight into potential Chinese outbreaks. In 2016, Washington and Beijing even agreed to jointly fund a surveillance system in Africa to help the continent’s governments better combat viruses like Ebola.

Such cooperation might seem fanciful now given the sharp divergence between Washington and Beijing on issues from Taiwan to the South China Sea to China’s abominable record on human rights. But these disputes existed when George W. Bush and Barack Obama held office, too, and those presidents elevated cooperation on public health, nonetheless. They could do so because the U.S.-China relationship was less hostile overall. It was Donald Trump who pulled U.S. medical and scientific officials out of China and then used the Covid pandemic as an opportunity to further sever ties. By declaring, as one of Mr. Biden’s top China aides did, that “the period that was broadly described as engagement has come to an end,” this administration has signaled that it does not consider a return to pre-Trump levels of U.S. public health cooperation possible, or even desirable. That’s exactly the wrong response to a pandemic that originated in China and has taken three-quarters of a million U.S. lives.

Mr. Biden deserves credit for trying to establish a “guardrail” so the United States and China avoid war. But guardrails aren’t enough. The inconvenient truths of today’s world require far greater cooperation between Washington and Beijing. And that greater cooperation isn’t compatible with growing antagonism because, as more than 200 experts on U.S.-China relations wrote in a public letter in 2019, while there are figures in China who support working more closely with the United States, “Washington’s adversarial stance toward Beijing weakens the influence of those voices in favor of assertive nationalists.”

The Biden administration cannot afford to triangulate between hawks who want to treat China as an enemy and progressives desperate for dramatic action to prevent climate and public health catastrophes. It needs to choose what it values most. Pretending not to choose is a choice, too.