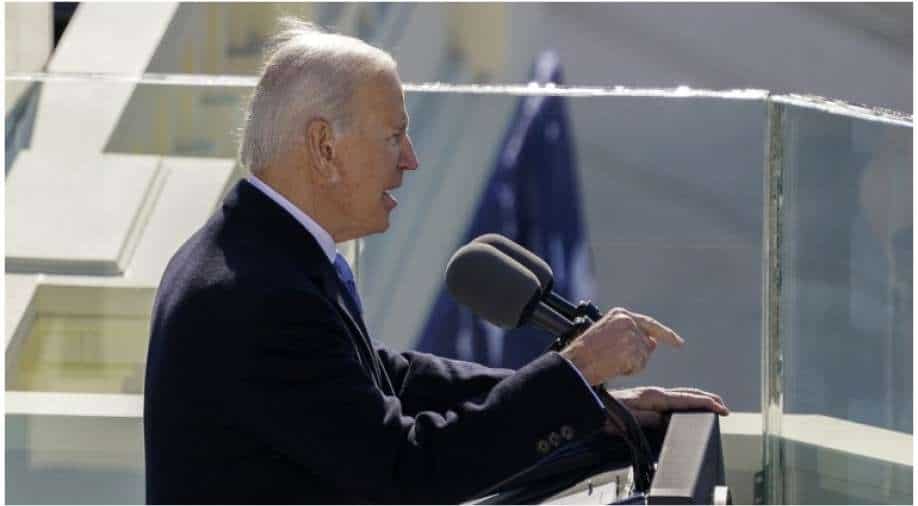 US President Joe Biden delivers his inauguration speech on January 20, 2021, at the US Capitol in Washington, DC. Biden was sworn in as the 46th president of the US. Photograph:( AFP )

Biden, now the 46th president, acknowledged all that in his inaugural address, calling for comity. “Let’s begin to listen to one another again, hear one another, see one another,” he said.

Joe Biden began his presidency Wednesday with the same animating philosophy that guided his campaign: The center can hold.

That’s a big wager. American society is more brittle now than it has been in years. It is unequal, unhealthy and politically radicalized. A pandemic is raging nearly unchecked. The economy is in tatters. The climate is in crisis. Residents of red and blue America can’t even agree on the reality before their eyes, let alone demarcate the common ground they share.

It was a sanguine message to deliver from the steps of the U.S. Capitol, two weeks to the day after the building was sacked by a mob trying to overturn the results of the election. Because of the continued threat of violence, tens of thousands of National Guard troops were on hand Wednesday to provide security for a crowd that was sparse because of the coronavirus contagion.

Biden spoke to the bleak gravity of the moment, noting that democracy is as precious as it is fragile. “Without unity, there is no peace,” Biden said, “only bitterness and fury, no progress, only exhausting outrage. No nation, only a state of chaos.”

The past four years have been nothing if not exhausting and chaotic. Donald Trump began his term from the same rostrum in 2017, decrying the “American carnage” caused by urban poverty, lost manufacturing jobs, drugs and crime. After four years of Trump waging ceaseless battle against his political opponents, the country is still shot through with all those maladies and is even more unmoored from the political traditions that once bound it together.

In his last act as president, Trump and the first lady flew to Florida rather than share the stage with Biden and participate in the pageantry of a peaceful transition of power. But there was the faintest flicker of decency. “I wish the new administration great luck and great success,” Trump told supporters who watched his departure from Joint Base Andrews. “I think they’ll have great success. They have the foundation to do something really spectacular.”

Inaugurations are, by their nature, the closing of one chapter in the nation’s story and the beginning of another. Now at the helm of the executive branch, along with Kamala Harris — the country’s first female vice president, first Black vice president and first Asian American vice president — Biden has a chance to test the firmness of common ground. For the new president and the nation to succeed, there must be enough like-minded leaders willing to put prosperity over party and the good of the nation above all else.

Biden’s call for unity was not a demand that Americans agree but rather that they live in mutual tolerance, recommitted to the democratic process and to peacefully adjudicating their differences until the next inauguration. All Americans should be able to agree on that.

The terrible ravages of the coronavirus pandemic are evident in every corner of the world, so it should seem self-evident that every effort must be made to find out where and when the virus made its fateful leap from animal to human. That is why a team from the World Health Organization last week arrived in Wuhan, China, where the coronavirus was first identified.

Alas, the Chinese Communist Party has consistently demonstrated that it is far more concerned with maintaining some myth of infallibility than with helping find the source of the scourge. In doing so, it is obstructing efforts to prevent other pandemics and endangering all humanity.

Just getting into China has taken the WHO’s international team of scientists more than a year, considerably lowering the odds of finding any clues about the origins of the virus. Even after permission was granted for the team to arrive in the first days of the new year, China procrastinated, prompting the director-general of the WHO, Tedros Adhanom Ghebreyesus, to express disappointment — a sentiment that in the politically charged lexicon of the organization amounts to a sharp rebuke.

When the team finally reached Wuhan on Thursday, China promptly planted more obstacles in its way. Two scientists remained in Singapore after they tested positive for coronavirus antibodies, and the remaining 13 were ordered to quarantine for two weeks in Wuhan, although all 15 tested negative for the virus before setting off.

When they do finally get to work, the going is not likely to get any easier. While the Chinese government publicly claimed it has cooperated with the WHO team from the outset “in an open, transparent and responsible attitude,” it has not. Instead it has repeatedly thrown out red herrings suggesting that the source of the virus was not China or that it might have had more than one source. Chinese officials have suggested at various times that the WHO should also go to Spain and other countries.

The Trump administration did not help. When he was president, Donald Trump contributed to the politicization of the pandemic by regularly referring to the coronavirus as the “Chinese virus” and suggesting that it might have escaped from a Chinese laboratory.

Trump also withdrew the United States from the WHO after accusing the organization of not being sufficiently critical of China. In fact, the WHO is politically constrained from publicly criticizing any of its member states. Meanwhile, the Trump administration’s withdrawal from a global organization critical to the struggle against a pandemic was widely condemned as the height of folly. President Joe Biden is expected to promptly rejoin.

It is China, however, that bears the primary responsibility for tracing the origins of the deadly pathogen first identified on its territory. Instead, China first sought to quell reports of a new disease. Then China slapped stern control over any information about it while putting out unsubstantiated claims and touting its handling of the outbreak.

An investigation by The Associated Press found that as the pandemic gained momentum, President Xi Jinping gave direct orders that any information had to be cleared by a government task force and that anyone publishing without permission, “causing serious adverse social impact, shall be held accountable.” As a result, little has been made public, and the WHO team is not likely to get the direct access to data and research that is critical for its investigation.

Without cooperation and transparency in China, there is little the WHO can learn. The sprawling Huanan Seafood Wholesale Market in Wuhan, which peddled game meat and live animals and to which many of the first infections were traced, has been closed and disinfected. The samples and information gathered there are locked away at the Chinese Center for Disease Control and Prevention, and no researchers will dare speak with the international team without explicit permission — and a carefully vetted narrative — from the government.

Whether that first germ came from a bat or a pangolin or a civet or a neighboring country is likely to remain a mystery, and the search for ways to stop such transmission will remain handicapped.

The WHO, which is beholden to each of its 194 member states, has little leverage with China. But the rest of the world should raise its voice and demand that Beijing share everything it knows with the WHO experts and the world. It should be made clear to Xi that to treat a disease that has sickened 94 million people and killed 2 million as a propaganda problem is dangerous and unworthy of a country with pretensions to global influence and power.