Trump hits back at Meryl Streep, calls her 'overrated' 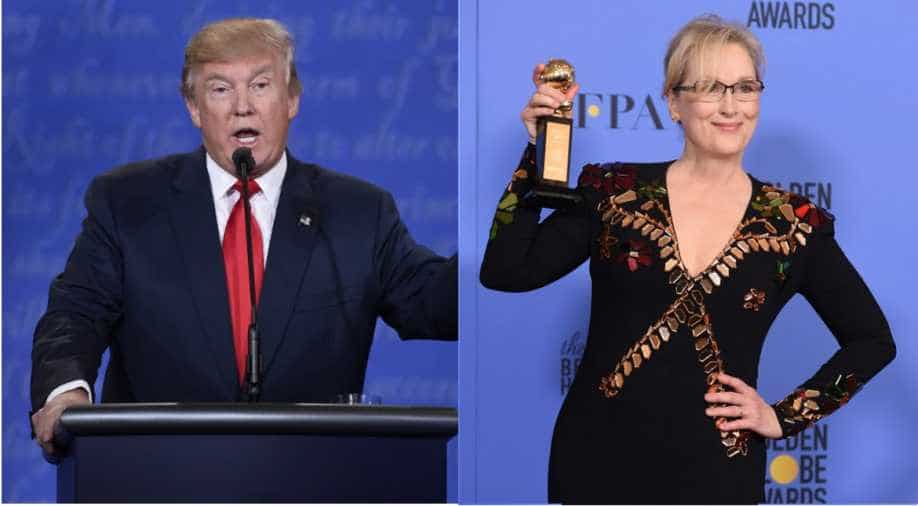 The award-winning actress said that the performance that stood out this year was not of an actor but that of 'a person asking to sit in the most respected seat in our country' when he imitated a disabled reporter. Photograph:( AFP )

US President-elect Donald Trump hit back at actress Meryl Streep on Monday after she criticised Trump in her Golden Globes acceptance speech in Beverly Hills.

In a reference to Trump, Streep had said the performance that stood out this year was not of an actor but that of "a person asking to sit in the most respected seat in our country" when he imitated a disabled reporter.

"It sank its hooks in my heart. Not because it was good, there was nothing good about it. But it was effective and it did its job." She did not name Trump in her speech.

"It kind of broke my heart," Streep told the audience on Sunday. "This instinct to humiliate, when it's modelled by someone in the public platform, by someone powerful, it filters down into everybody's life. Because it kind of gives permission for other people to do the same thing."

Trump replied back in a tweet saying Streep was "one of the most over-rated actresses in Hollywood" who didn't know him. He further called her a "Hillary flunky who lost big".

Meryl Streep, one of the most over-rated actresses in Hollywood, doesn't know me but attacked last night at the Golden Globes. She is a.....

Hillary flunky who lost big. For the 100th time, I never "mocked" a disabled reporter (would never do that) but simply showed him.......

"groveling" when he totally changed a 16 year old story that he had written in order to make me look bad. Just more very dishonest media!

Trump had imitated Serge Kovaleski, a reporter for the New York Times with a congenital joint condition, at a campaign rally in South Carolina in September last year. The president-elect had received flak for his action but defended himself in a tweet on Monday.

Towards the end of her speech, the three-time Oscar-winning actress requested the Hollywood Foreign Press and the acting community to join her in supporting the committee to protect journalists.