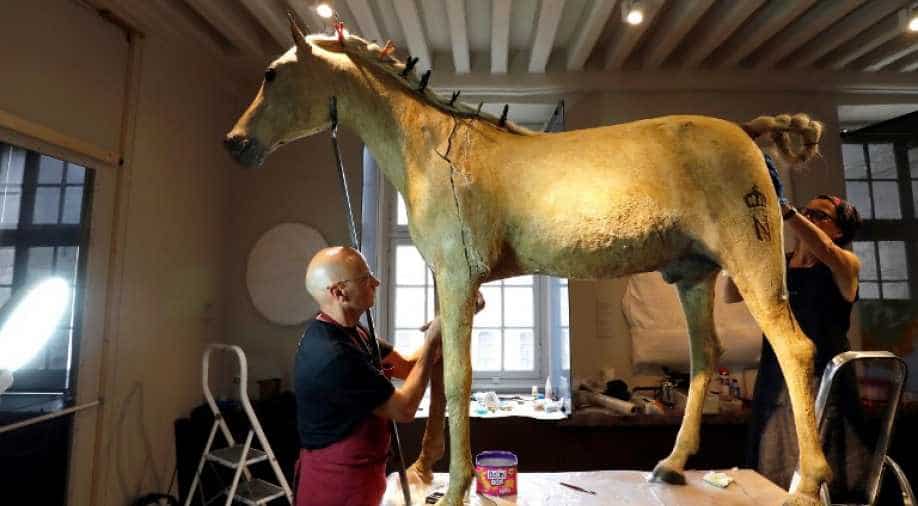 The white Arabian stallion, a gift to Napoleon from an Ottoman sultan in 1802, sports a brand on his rump made up of an N topped with a crown. Photograph:(AFP)
Follow Us
Visitors to the Army Museum in Paris are being treated to the rare sight of two taxidermists at work restoring a stuffed horse - the last one ridden by Napoleon Bonaparte.

"Le Vizir" is a little worse for wear more than 200 years after carrying the emperor to victory against the Prussians and the Russians - not to mention being stuffed not just once, but twice.

"It's a specimen that has suffered," was the expert, if understated, assessment of taxidermist Yveline Huguet as she worked putty into a crack in Le Vizir's chest.

The white Arabian stallion, a gift to Napoleon from an Ottoman sultan in 1802, sports a brand on his rump made up of an N topped with a crown.

One of the emperor's favourites - recalling great victories at Jena and Eylau - he accompanied his master to exile in Elba after Napoleon's first forced abdication in 1814.

By the time Napoleon swept back to power for 100 days in France the following year after escaping from Elba, Le Vizir was old enough to retire.

So, while Le Vizir also returned to France he was spared the ignominy that awaited Napoleon at Waterloo.

Instead he spent his twilight years in the care of Leon de Chanlaire, an officer of the imperial stables, while Napoleon was banished to the British crown colony of Saint Helena in the southern Atlantic.

Chanlaire had Le Vizir stuffed shortly after the horse died at the ripe old age of 33 in 1826.

But fearing that reprisals against those suspected of ties to Napoleon would extend to the emperor's horse, Chanlaire sold Le Vizir on to William Clark, an Englishman living in northern France.

Chanlaire "had a few relationship problems with the regime of Charles X, because he was very supportive of the empire," said Gregory Spourdos, the 36-year-old deputy curator of the Army Museum's modern section.

But Clark too feared association with the defunct empire, and he arranged for Le Vizir to be smuggled to England in 1839.

Clark's compatriot John Greaves had the stuffing taken out of Le Vizir so that the precious pelt could be packed into a trunk and escape the notice of customs officials.

"By the way, it was on the advice of the English consul," Spourdos said.

Once safely across the Channel, Le Vizir could be restuffed, and he went on display at the Manchester Natural History Society in 1843.

Today, his mane neatly kept out of the way with hairdressers' clips and his modesty covered by duct tape, Le Vizir stands stoically on a raised platform as the two taxidermists go about restoring him to his former glory.

The project, lasting around four weeks, involves repairing tears and cracks, notably a gaping fissure running down one shoulder.

The taxidermists will also rehydrate the mounted beast and give it a good dusting.

"Whether it's Napoleon's horse or another, the work is the same. It's the historical aspect that's unique," Huguet said. "It's nice to be part of a project like this."

The Army Museum made a crowd-funding appeal to finance Le Vizir's restoration, easily surpassing its target of 15,000 Euros, taking in $23,130.

The extra money will be put towards the purchase of a climate-controlled glass display case.

Le Vizir was finally repatriated in 1868, after the Manchester society had "a few financial difficulties and had to give up the horse," Spourdos said.

By then, "Le Vizir could return to France because it was Napoleon III who reigned, so of course everything linked to Napoleon I was welcome," he said.

But Napoleon's nephew ruled for only two more years until France's defeat at the hands of the Prussians.

With the empire consigned to history, Le Vizir was consigned to a storeroom of the Louvre Museum for more than 30 years "a bit forgotten", the curator said.

Le Vizir finally took up his place at the Army Museum - just a short trot away from his master's imposing tomb under the dome of Les Invalides, in 1905.

"Both had gone to England - one to Saint Helena and the other to Manchester, and then the master and his horse meet again here, not far from each other," Spourdos said.