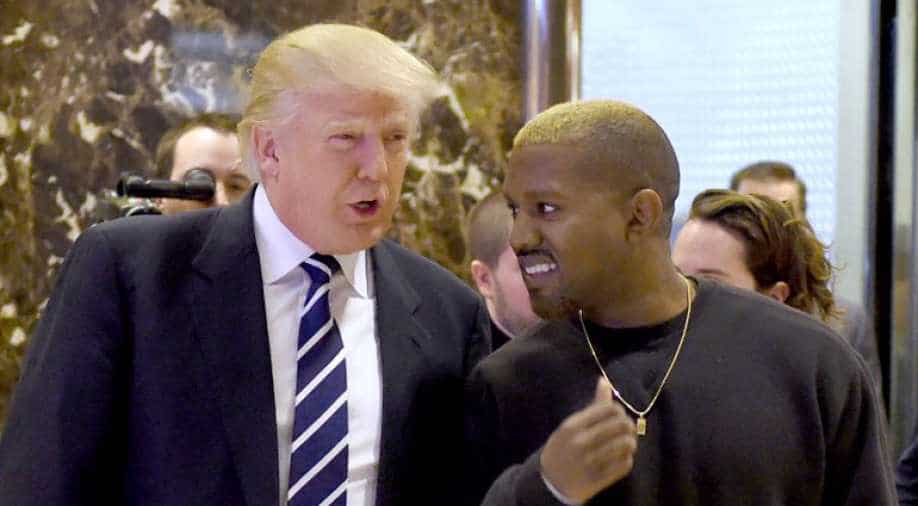 Rap superstar Kanye West on Tuesday delivered a surprise even in this most unusual of political years -- he met President-elect Donald Trump, marking the artist's first appearance since a reported mental breakdown.

West, a rare artist and even rarer African American celebrity to voice support for Trump, said he went to discuss issues of concern to minorities with the populist leader.

Trailed by an entourage including his own cameraman, West silently walked into Trump Tower and returned to the lobby 40 minutes later with the president-elect himself who, asked what the two discussed, said: "Life."

West, sporting a fitted black sweatshirt and white sneakers, at first stood sullenly with his arms folded as reporters peppered him with questions -- including on whether he would make good on his earlier vow to run for president in 2020.
"I`m just here to take a picture right now," West finally said before flashing a smile.

West later took to his and Trump`s favorite medium, Twitter, to elaborate, saying he came to discuss "multicultural issues" and had raised bullying, education and violence in his hometown Chicago.

I wanted to meet with Trump today to discuss multicultural issues.

I feel it is important to have a direct line of communication with our future President if we truly want change.

And, in a wry reply to questions on his own presidential aspirations, tweeted "#2024" -- or after a theoretical Trump second term.

Quoting an anonymous source on West`s side, E! News said Trump reached out as he believed the rapper -- who earlier this year said he was $53 million in debt -- was "a great role model when it comes to business."

West last month stunned a California audience with a lengthy speech in which he said he did not vote but would have backed Trump as he appreciated the businessman`s outspokenness.

West was soon hospitalized after a series of erratic comments on stage, including alleging that his sometime collaborator Jay-Z was sending hitmen to kill him and lashing out at Facebook founder Mark Zuckerberg for not paying the rapper`s debt.

The celebrity news website TMZ said that West`s doctor feared he had suffered a mental breakdown and that West had flown to New York on Monday to see a psychiatrist.

Notably absent at Trump Tower was the rapper`s wife, reality television star Kim Kardashian. She has kept a low profile since gunmen broke into her Paris hotel room and robbed her of $10 million worth of jewelry -- and gossip pages have recently speculated on the state of the couple`s marriage.

The New York Post reported that Trump will also meet the Italian tenor Andrea Bocelli, who is performing Thursday at Madison Square Garden, and appeal to him to sing at the January 20 inauguration.

Only a smattering of artists backed Trump, who pulled off an upset through support from white working-class men after a campaign in which the tycoon excoriated Mexicans, Muslims and other minorities.

West previously campaigned for President Barack Obama and accused president George W  Bush of not caring about African Americans after the patchy response to Hurricane Katrina.

The 39-year-old was also among the first in hip-hop to speak forcefully against homophobia.

But West has drawn growing comparisons to Trump, with the rapper delighting in self-aggrandizing social media postings and criticism of establishment rules.

West has likened himself to Michelangelo and has alleged that the Grammys are rigged, threatening to boycott the music industry awards if he is not nominated for Album of the Year. He was not -- although he is up in eight other categories.