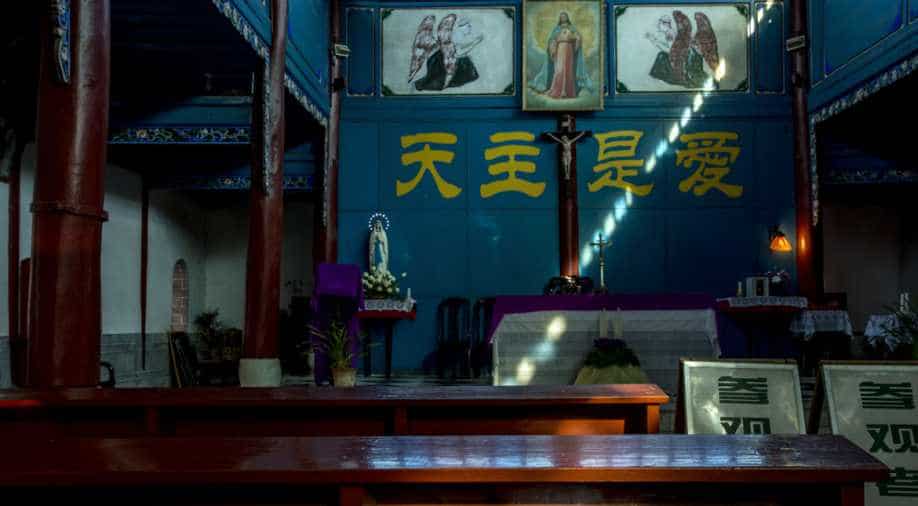 Saint Chapdelaine's museum is part of a local tourism drive, but also fits into the ruling party`s nationalist narrative and Beijing's decry of the influence of 'Western values'.(Representative image) Photograph:( Getty )

Follow Us
To the Catholic Church, French missionary Auguste Chapdelaine is a saint, martyred for his faith 160 years ago in China. To Communist Party officials, he is a devilish rapist, bandit and spy.

Finishing touches are being put to a new museum in Dingan, the village where he died, celebrating the "patriotism" of his execution and condemning the "spiritual opium" of religion.

Inside, Catholic vestments and chalices are displayed near a life-sized diorama of a white-robed Chapdelaine kneeling before the Qing dynasty magistrate who had him tortured and killed.

Outside, a six metre bronze mural shows the missionary confined in a cage designed to suffocate captives to death over several days.

The facility is part of a local tourism drive, but also fits into the ruling party's nationalist narrative and comes as increasingly assertive authorities in Beijing decry the influence of "Western values".

Chapdelaine, born on a farm in Normandy, was ordained in his early twenties and sent in the early 1850s to the southern Chinese region of Guangxi, where he was known as 'Father Ma'.

In 1856, he was arrested with several Chinese believers in Dingan by the newly appointed magistrate, Zhang Mingfeng.

Foreigners were banned from entering the area and official suspicion of Christians was fuelled by the bloody Taiping rebellion, begun in Guangxi by a man claiming to be Jesus' brother and costing millions of lives.

Independent historians say Chapdelaine was accused of fomenting insurrection, refused to pay a bribe, and died aged 42 following three days of torture. He was posthumously decapitated and his head hung from a tree.

Chapdelaine's death was among the stated justifications for France's participation in the Second Opium War, which saw French and British troops loot Beijing`s Old Summer Palace and burn it to the ground, one of the national humiliations the Communist Party emphasises to support its legitimacy.

In 2000, the Vatican canonised Chapdelaine and two of his executed followers as martyrs.

In response, Chinese state media attacked the priest as a French spy and rapist of local women -- charges which scholars say have no historical grounding, but which have been given new life by the local government's publicity push.

"He was evil," said a middle-aged man working at the project site who refused to give his name. "He was the reason you invaded us," he added.

'Father Ma was not a simple missionary'

As well as the museum in Dingan, a dusty mountain village, local authorities mounted a poetry contest last year offering 1,000 Yuan ($150) prizes for couplets to "boost patriotic spirit" and praise magistrate Zhang as an "iron-willed hero".

County officials have contracted a film company to produce a two-hour documentary on Chapdelaine for 3 million Yuan ($460,000).

"Father Ma was not a simple missionary," the firm`s CEO Liang Shuikang told AFP. "His so-called `baptism` was taking other people`s wives and sleeping with them first," he underlined.

"We are going to restore the true story of history," Shuikang said, adding the documentary`s goal was to have people remember China's sufferings and "make the motherland into a great power". Some scholars worry that history is being abused.

There is no doubt Chapdelaine`s death was exploited for imperialist gain, but Anthony Clark, China historian at Whitworth University in Spokane, Washington, said the ruling party's version of history was "largely contrived".

The ideas that Chapdelaine was "a lascivious womaniser" and spy in priest's robes were "unsupportable in any historical records", he added.

Other scholars note that official records suggest Chapdelaine had been confused with a bandit, Ma Zinong, who shared the same Chinese surname.

"Nationalist sentiment" had risen alongside China's economic growth and some academics felt obliged to follow official propaganda, he added. "They promote under the name of patriotism what they think are heroic deeds by China," he said, but doing so was "wrong and ignorant". In the cliffside village of Changjing, where Chapdelaine lived and preached a few kilometres from Dingan, the residents are still mostly Catholic and say they are puzzled by the publicity drive.

"They believe he`s an evil man, but we don`t see him that way," said a young farmer named Yang. "How could he be a spy?" he questions.

In Dingan itself, a priest named Father Wei leads a small, aging congregation of roughly 100 Catholics. Performing mass for ten believers in a church on the second floor of a building a short walk from the new museum, he offered a prayer for Chapdelaine, asking for strength to keep the faith.

Local authorities were relentlessly hostile to the church, he said. "It`s because it`s an atheist country," he said. "They're tricking ordinary people."

Non-Catholics refuse to enter the church because of the stigma around Chapdelaine, he added.

"How could Father Ma be that bad? People think that just because of the propaganda, but it makes life difficult for us."