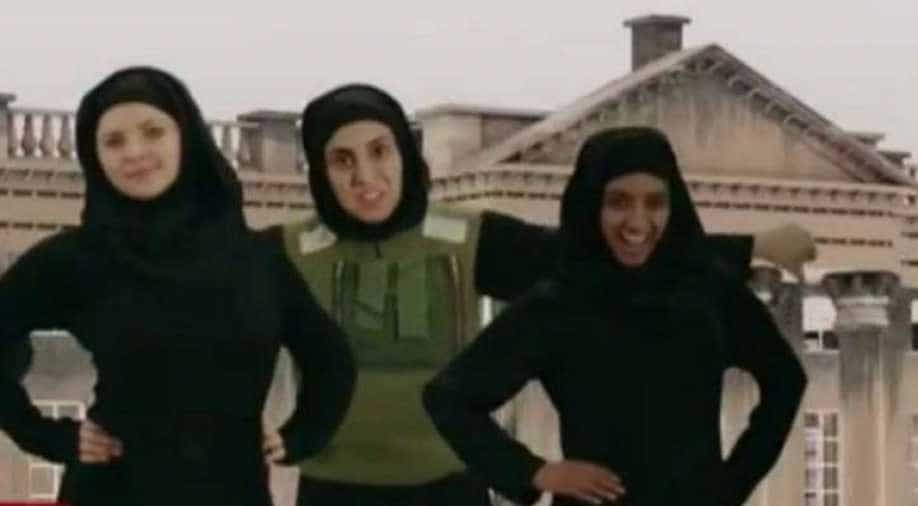 A still from the BBC show, "The Real Housewives of ISIS." Image courtesy: YouTube Photograph:( Others )

We are back to raising usual questions about comedy and satire. BBC’s latest satirical offering, a sketch called "The Real Housewives of ISIS," debuted this week. It has already gone viral on social media while eliciting some extreme responses from viewers. "Revolting," the BBC Two show on which the sketch aired, is a satirical sketch and prank series by the makers of "The Revolution Will Be Televised’ and ‘Brexageddon."

The two-minute video manages to refer to jihad, suicide vests, burqa, bombings, slavery, forty virgins, chat room grooming, amongst other things. The content is indeed explosive. BBC has been criticised for airing a sketch that pokes fun at the real women suffering under the clutches of the ISIS fighters. Charges of Islamophobia have also been levelled against the makers — the BAFTA winning duo Heydon Prowse and Jolyon Rubinstein.

The makers seem to be engaged in a David-Goliath fight. But who is David here? Does the sketch punch down the victims of ISIS brutalities and fan the already raging fire of the anti-Muslim sentiments? Or, is it serving the great cause of satire — reformation — as proposed by celebrated satirists across cultures and centuries?

“We poets will force you into our point of view,” says Horace humourously towards the end of his fourth Satire. The classical Roman satirist believed in the power of satire in bringing social change through ridicule and laughter. He, however, warned against overuse of bitter invective. Talking of Old Comedy in the fourth Satire, Horace clearly says that ridicule is better than invective and Old Comedy should be imitated in this regard. He states that a good satire needs much more than wit.

Studying the culture of folk humour in the Middle Ages and Renaissance, Mikhail Bakhtin in his "Rabelais and His World" says, “A boundless world of humorous forms and manifestations opposed the official and serious tone of medieval ecclesiastical and feudal culture.” Laughter is subversive. It has been a traditional tool to dismantle status-quo.

In the current context, the "Housewives" sketch seems to be combating the demagoguery of the ISIS. Aditi Mittal, a Mumbai based comedienne who has been working closely with BBC, shares her view on the same. “The sketch is hilarious. It's mocking what is a very real problem of young women getting groomed online and joining causes like this. It is mocking joining the ISIS by young people — a thing that ought to be seen as something absurd. In that spirit, I'm 100% on it and think it is pitch perfect. If we're not going to make fun of ISIS, then who do we get to make fun of?” She adds, however, “Since it is being released into a pervasive culture of the online world — where sarcasm and subtleties can get lost — it is fair enough to say that the video could be construed as Islamophobic.”

What makes the same video funny for some and offensive for others?

Mittal has a ready answer for this age-old conundrum. “Without proper context nothing is funny. The challenge with the online world is that now context is very wide reaching and different, literally, from person to person. That is why it may/may not be problematic.”

Mittal sees the Islamophobia and insensitivity charges against the sketch as emanating from the rise of hateful rhetoric against Islam in the past few years. “Also, since a lot of people still don't know how to distinguish between Islam and ISIS, this video could easily be misconstrued to further anti-Muslim sentiments.”

Rana Safvi, a Delhi based author and a practicing Muslim, puts it strongly, “We have to separate Islam from the ISIS. The sketch is stereotyping the ISIS fighters but in this there's no Islamophobia at all.” She says that ridicule always works better than anger. However, she finds the sketch a bit insensitive as it is trivialising a genuine problem: the plight of these young women. Nevertheless, Safvi grants the makers satiric license.

Mehr Tarar, a Pakistani columnist, lauds the sketch for capturing the essence of “what we read about ISIS and women who join them willingly”. She does not find the video Islamophobic at all. “The video is about skewed narratives and priorities that are upside down,” adds Tarar.

Commenting on those who are outraging against the video, Eiynah, the anonymous creator of the iconic anti-homophobia comic book for children, "My Chacha is Gay," says, “They don't realise that they are only making Muslims look bad. Outrage around "The Real Housewives of ISIS" reminds me just how sorely lacking Muslim community is in humour.” She continues, “I want to live to see a Muslim "Book of Mormon" style show take place, safely some day inshallah! We should be able mock without getting killed. I want to go into a craft beer store and see a tongue in cheek beer label referencing my culture.” Eiynah, who identifies herself as an ex-Muslim feminist woman, has created and shared a visual of an array of Shariah-compliant liquor bottles.

Whenever any cultural or literary production aims at the ills of a community, a similar storm brews on and off mainstream and social media. Bloodbath at the Charlie Hebdo office, threats to Maqbool Fida Husain from the Indian Hindu right-wing, fatwa against Salman Rushdie have one thing in common: inability to laugh.

Jo Coppola, noted columnist and television critic in the 1950s was thus quoted on comedy in "The Realist" in 1958:

“Good comedy is social criticism…Comedy is dying today because criticism is on its deathbed... because telecasters, frightened by the threats and pressure of sponsors, blacklists and viewers, helped introduce conformity to this age... In such a climate, comedy cannot flourish. For comedy is, after all, a look at ourselves, not as we pretend to be when we look in the mirror of our imagination, but as we really are. Look at the comedy of any age and you will know volumes about that period and its people which neither the historian nor anthropologist can tell you.”

Coppola’s words hold true even half a century later today. Comics, satirists, and filmmakers are pitted against intolerance in an unequal fight. It is easy to force exile upon artists, put the publications out of business, and take shows off-air through threats of violence and boycott. In this David-Goliath battle, it is the comedy that is David, fighting against the Goliath of conformity desired by religious, political, and terror outfits.