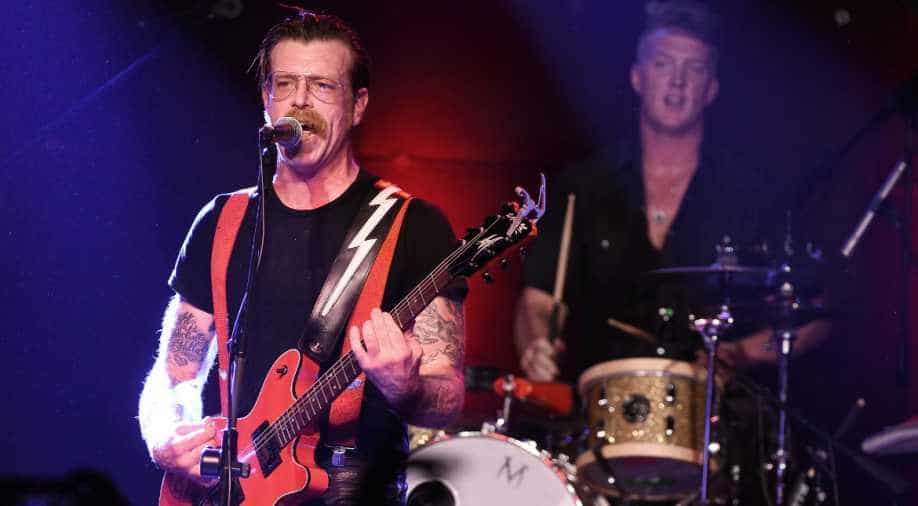 Alexander's mother Sheelagh gave Hughes a standing ovation as he left the stage, while sister Zoe Alexander was presented a bouquet of flowers before the sell-out crowd. Photograph:( Getty )

Eagles of Death Metal frontman Jesse Hughes on Tuesday made a surprise performance at a London tribute concert to his "dear friend" Nick Alexander, the roadie killed in last year's Paris attacks.

The US rocker performed a solo set and joined in a mass singalong of Neil Young's classic hit "Rockin' in the Free World" with other artists including British indie group Maximo Park and solo artists Gaz Coombes and Frank Turner.

Alexander, a 36-year-old Briton, was selling merchandise at the band's concert at Paris' Bataclan concert hall on November 13 last year when he was killed by Islamic terrorists.

Hughes ended his set with an acapella song "I'll Blow You a Kiss in the Wind", saying it was "specifically for my dear friend Nick, who I miss every day... it's from our favourite episode of 'Bewitched'". Alexander's mother Sheelagh gave Hughes a standing ovation as he left the stage, while sister Zoe Alexander was presented a bouquet of flowers before the sell-out crowd.

"What is happening here is one of the most beautiful things you could ever ask for," the 44-year-old singer told the audience. "The only answer there is for things that are terrible is love, beauty and peace."

Dressed from head to toe in white, Hughes earlier played Eagles of Death Metal hits "Cherry Cola" and "Whorehoppin'" accompanied by a backing tape, reminiscing that he and Alexander had "joked about how cool Britney Spears was and how it was OK she played from recorded tracks".

"I'm so glad that he was here, I've been a massive fan of Jesse for a long, long time and he's been through a lot," concertgoer Kerry-Ann Clarke told AFP after the gig.

"It was nice to see him around the corner, I asked him if he is OK now and he said he's gone through intensive therapy and is feeling a lot better and he's not going to let it beat him down."

Queens of the Stone Age singer Josh Homme, a part-time bandmate of Hughes, sent a video message, asking the crowd to "raise a glass and celebrate the Alexander family" in a video link.

France on Sunday marked the first anniversary of the coordinated Paris attacks, which claimed 130 lives. A ceremony took place outside the Bataclan, where 90 people were slain by three Islamic State attackers during a rock gig. The killers ruthlessly picked off young people lying defenceless, injured or cowering in fear.

The names of those killed at the Bataclan were read out as hundreds of people gathered in silence under rainy skies. Rock star Sting reopened the refurbished Bataclan on Saturday night with an emotionally-charged show held amid tight security.