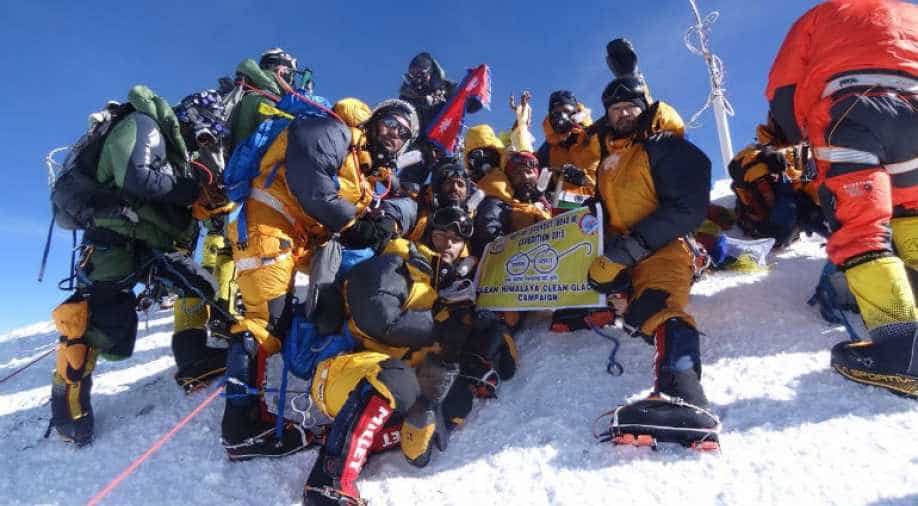 The BSF team at the top of Mount Everest. Photograph:( Others )

The brave men of India's Border Security Force achieved another feat last week when their two teams scaled Mount Everest. One of the teams was led by Assistant Commandant Loveraj Singh Dharamshaktu which scaled the Everest first with seven members and the other by young Himachali Deputy Commandant Avinash Negi which followed the first team and climbed the world's tallest peak (8848 metres) from Southwest face.

Loveraj conquered the highest peak for a record seventh time and he says, it's the love for the mountains that takes him to the Everest. Deputy Commandant Avinash Negi said "the best view comes after hardest climb".

The BSF expedition was flagged-off by Union minister Rajyavardhan Singh Rathore on March 20 the teams successfully scaled the peak on May 20 and 21.

From being the desert scorpions to conquering the intimidating, snowy peaks, there's nothing a BSF Jawaan can't do.

Having conquered 36 peaks in 19 expeditions, they're now off to conquer Mt. Everest. Thrilled to have flagged off this exciting expedition. May Everest be yours! pic.twitter.com/1Sk5VbnCYO

The team took an initiative to clean the mountains under PM Modi's Swachh Bharat (Clean India) Mission. Before Everest, the team climbed the Lobuche peak (6200 metres) in Nepal to collect non-bio degradable waste from higher camps and collected more than 700 kg of trash. The leftover trash by trekkers and mountaineers on glaciers is one of the major reasons for rapid melting of glaciers. Prime Minister Modi applauded BSF team climbers in "Mann Ki Baat" for their effort to clean the mountains. Apart from this, the team set up the world's highest medical camp for the poor and needy Sherpas, an ethnic group in the mountainous regions of Nepal and expert climbers.

This calls for double congratulations...for a successful climb and furthering the message of cleanliness! Very proud. https://t.co/HMfrmsB0sJ

The members of the two teams came from Himachal Pradesh, West Bengal, Uttarakhand and Jammu and Kashmir, and were accompanied by 10 support members and one doctor. Already having reached the base camp in Nepal, the BSF team is expected to reach India by first week of June.

It took almost 45 days for the teams to climb the Everest. The conditions were extreme, the velocity of winds were high up to 50 miles per hour and the temperature was oscillating between minus 45 and 50 degrees. But the sense of accomplishment kept the team motivated and strong. After scaling Mount Everest Deputy Commandant Avinash Negi took to social media and wrote a few lines on Facebook. "If you get tears in your eyes, it will freeze on your cheeks before it rolls down and as you reach close to the peak you feel very tiny in front of the nature, one mistake and that will take you to another world. The BSF team braving the harsh weather while on their way to Mount Everest.

The teams spent more than 32 hours above 26.K feet with very less oxygen and harsh weather condition. As they descend the peak after paying reverence to the goddess of the mountain, the nations looks upon them with great pride.