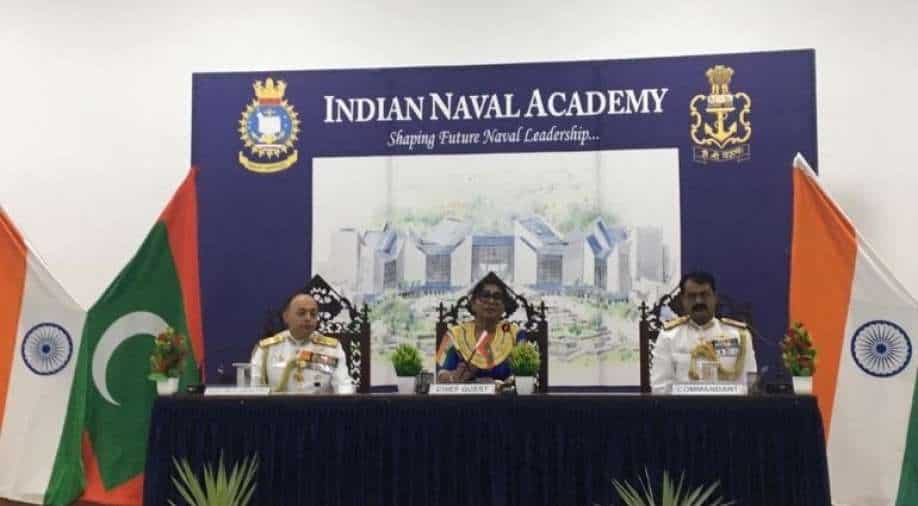 Visiting India has been more like visiting a close relative’s home, for Maldivian Defence Minister Mariya Didi, who was recently in the subcontinent for the Official Engagements.

In a first for the Indian Naval Academy, Ezhimala, Kerala, she was the first Foreign Defence Minister to review the Passing Out Parade, at the academy that is stepping into its 13th year.

Addressing the media following the passing out parade, she emphasised on the strong India-Maldives ties and recalled her college education in India’s Bengaluru. “During my student days, we used to travel from Bangalore to Trivandrum and then take a flight to Male. We could get our local Maldivian food in Trivandrum and even some signboards would be in our ‘Divehi’ language” she recalled about her time in India, as a student.

Speaking of India, she said India was Maldives’ biggest development partner after President Ibrahim Solih’s government came to power. “India helped us a lot- 250mn USD budget support during Covid-19, India provided us Covishield vaccines, helped us in our economic recovery(which the world ban terms as remarkable” and our highest tourists arrivals are also from India”.

Queried about the benefits of the Greater Male Connectivity Project, a 7km-long bridge, that is India’s largest infrastructure project in Maldives, she told WION that it helped connect several crowded localities in and around Male.

She said that such projects were necessary in a congested city. “I would like to thank India for all you do, surely there will be many more projects such as an airport and Police academy” she added, when asked about the plans for further developmental projects.

Lauding India’s vibrant democracy, she said that democracy was hard work and also touched upon how Maldives also sees democracy as the best way forward. “Civil oversight over military is appreciable in India... We need to learn that it is the power of the ballot box, citizen is the ruler of the country... They are the taxpayers” she said in respect to her own nation.

She also emphasised that President Solih aims to make Maldivian forces fighting-fit and professional, given how their own citizens had been disappointed with the Maldivian Police and the Armed forces.

On Indian defence institutions training personnel from friendly-foreign countries and particularly those from Maldives, she said that lessons and bonds from the academy would lead to a life-long friendship. She also referred to how top officials in the Maldivian forces were alumnus of Indian defence institutions and that Maldivian personnel would continue to train in India in larger numbers.

231 trainees had passed out as Naval Officers from the Indian Naval Academy, over the weekend. These cadets(commissioned as Naval Officer) had pursued different technical courses at the INA, spanning between six months, one year and four years. While the Indian Officers will go on to serve the Indian Navy, the foreign personnel will return to their respective countries.

As a part of Military diplomacy and in order to build stronger bridges of friendship, India’s Defence Institutions train military personnel from friendly-foreign countries. This helps develop trust, bonding and camaraderie and interoperability, between the forces. In the recent decades, the Indian Navy alone has trained over 15,000 foreign personnel from over 46 countries.