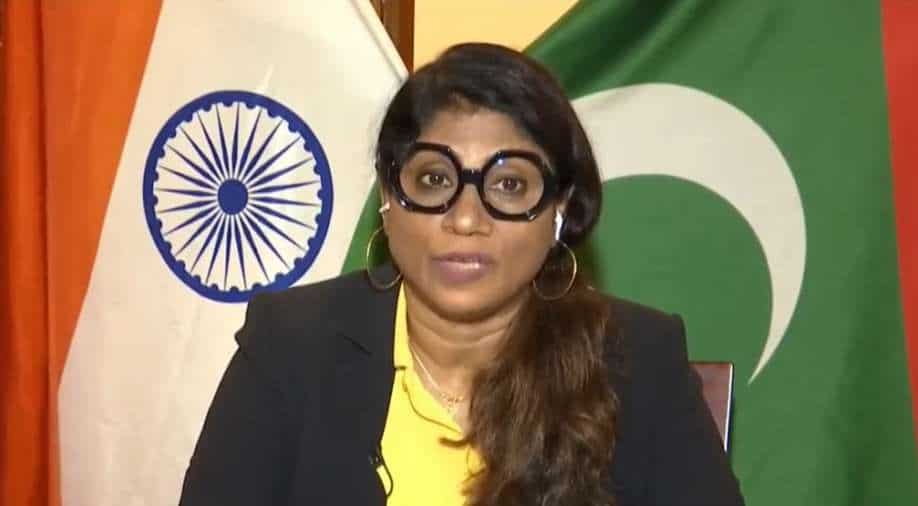 In an exclusive interview with WION, Maldives Defence Minister Mariya Ahmed Didi hit out against the malicious “India out” campaign, saying that the perpetrators are just “social media bots” and “don’t represent the majority” of the island nation.

Didi, who is on a six-day visit to India to review the 'Passing Out Parade' of officer cadets at the Indian Naval Academy, was responding to a social media campaign in the Maldives called ‘#Indiaout’.

The campaign was critical of Maldives President’s Ibrahim Mohamed Solih administration’s ‘India first’ policy. They have in the past opposed to “any Indian military presence”, and the opening of an Indian consulate in its southern Addu atoll.

Speaking to WION’s Executive Editor Palki Sharma Upadhyay, Didi said, “These are just a handful of people and social media bots, trying to create a nuisance and propagating baseless rhetorics. They are people with vested interests and ulterior motives, who are uncomfortable with rules-based order and democracy, transparency, good governance and hate to see a corruption-free society because they themselves are so corrupt.”

The defence minister said that these “corrupt” people belong to the narco-trade network whose “spoils are being thwarted by the joint efforts of India and Maldives.”

“The surveillance and patrolling that have come as a result of cooperation (between India and Maldives) is understandably worrisome for the beneficiaries of narco trade, whose illicit spoils are being confiscated in unprecedently large quantities,” she added.

“The fact that I am reviewing the passing out parade is the testimony to the close relationship that exists between our two nations,” she added.

The minister also gave details about her meeting with Vice Admiral Anil Chawla, Flag Officer Commanding-in-Chief, Southern Naval Command, and divulged the purpose of her visit to India.

“Southern Command is the training epicentre of the Indian Navy. I met with Southern Naval Commander, Admiral Chawla and the faculty. I saw the standard, and the kind of training they offered. Indian Navy is the cradle of leadership…The purpose (of the visit) is to increase training (of Maldives forces) so that we achieve the objectives of President Soleh’s government which seeks to professionalise the forces.

Talking about the recently held “Four Pillars” security cooperation meeting between India, Sri Lanka and Maldives, Didi said the purpose of such meet was to improve coordination against terrorism and trafficking.

“It is the longest-running exercise in the region. We started with India and Maldives and then Colombo joined. We had observers from Bangladesh and Seychelles. The four pillars, as agreed in the Colombo conclave, aims is to get rid of terrorism, radicalisation, maritime safety and security, trafficking, cybersecurity,” she said.

India, Sri Lanka, and the Maldives agreed to work together on the “four pillars” of security cooperation during a National Security Adviser-level meeting, virtually hosted by Sri Lanka in August.

The meetings are a part of the “Colombo Security Conclave” established by Sri Lankan President Gotabaya Rajapaksa in 2011 as the erstwhile Secretary to the Ministry of Defence. It aims to strengthen maritime security and cooperation in the Indian Ocean Region.