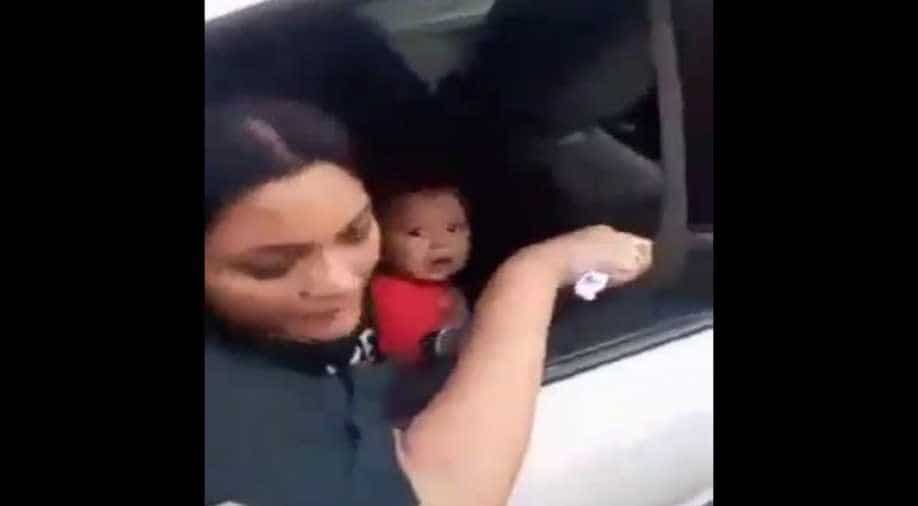 The screen grab of the video in which the woman is seen screaming for help while her car being towed away. Photograph:( Twitter )

In a ghastly incident, a Mumbai Police constable towed away a car with a sick woman seated in the rear seat breastfeeding her seven-month-old child.

Reports say the policeman decided to tow away the car due to illegal parking.

A video of the incident, which took place in Malad West on Friday, has gone viral on social media.

The video shows the shocking incident where the mother, identified as Jyoti Male, can be seen screaming for help while her car was being towed away near SV Road in Malad area on November 10.

A passer-by also can be seen asking the cops to stop but the cop is seen speeding while talking on his mobile phone, completely ignoring the woman and passer-by's plea.

"The policemen towing the car did not even once ask me to get down. Even when I told them that I am breastfeeding my baby they still did not stop," Male said.

The video has angered many viewers who took to Twitter and Facebook to express their anger at the insensitive cop.

No the Policemen towing the car did not even once ask me to get down, even when I told them that I am breastfeeding my baby they still did not stop: Jyoti Male pic.twitter.com/HpYEapJK4j

"It has been prima facie noticed that the saftey of woman and the child was endangered in the said incident. Hence, pending enquiry, the constable is being placed under suspension. Decision about departmental action shall be taken after the enquiry report is received," Kumar said.