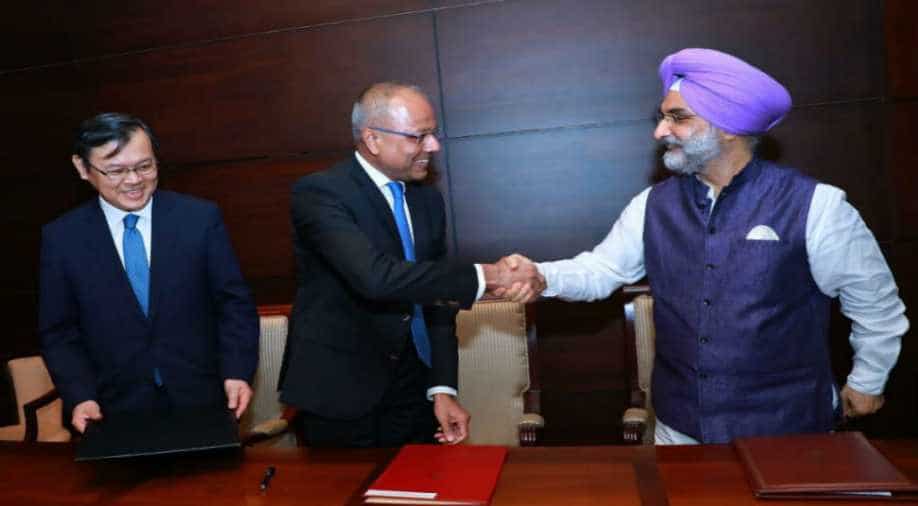 A memorandum of understanding (MoU) being signed between India, Japan and Sri Lanka in Colombo. (Picture courtesy: Sri Lanka Ports Authority) Photograph:( Others )

Around 70% of Colombo Port's trans-shipment business is India-related.

India, Sri Lanka and Japan have agreed to develop East Container Terminal (ECT) in Colombo's South Port. The three countries signed a Memorandum of Cooperation (MoC) in Colombo with India being represented by its High Commissioner - Taranjit Singh Sandhu.

A release from the Sri Lankan Port Authority (SLPA) said, "The three governments will work out details based on the MOC at joint working group meetings and advance their cooperation towards early commencement of work and operation of the ECT."

The release of the Port Authority said, " The 51% stake is also one of the best in SLPA joint ownership endeavours" with "SLPA's majority ownership in the new TOC represents a significant step in prioritizing National Interests."

Around 70% of Colombo Port's trans-shipment business is India-related.

Tuesday's development comes even as China has been trying to increase its influence in South Asia especially with the development of ports like Gwadar in Pakistan and Hambantota port in Sri Lanka. In 2017, unable to pay its debts, Sri Lanka handed over Hambantota to China for a 99 year period lease.

One year of Modi government 2.0: What the foreign media is saying