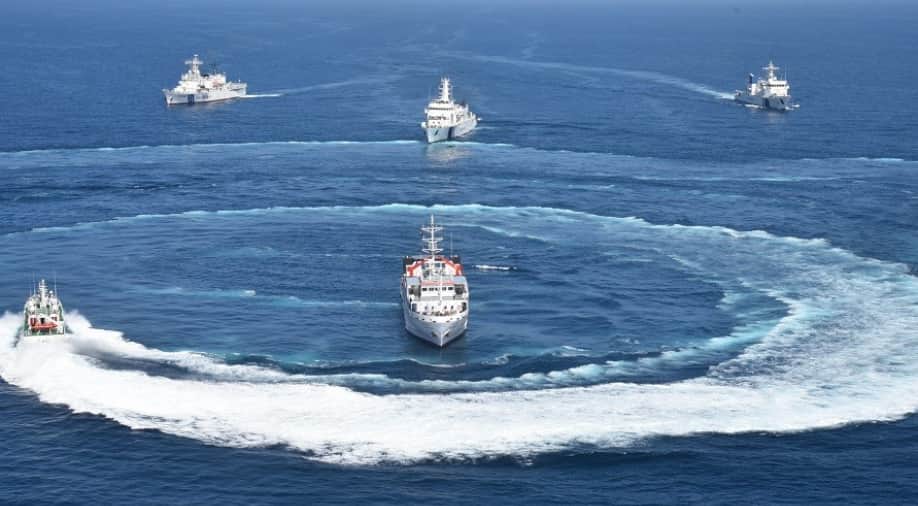 Japanese Coast Guard vessel 'Echigo' was accorded a formal welcome at the Chennai Port on Monday as it arrived for a 5-day goodwill visit that included the exercise.

Japanese Coast Guard vessel 'Echigo' was accorded a formal welcome at the Chennai Port on Monday as it arrived for a 5-day goodwill visit that included the exercise.

It was after a twenty-day journey the Japanese vessel reached Indian shores. It left Japan on December 26 last year and reached on January 13.

During Echigo’s time at the harbour, various activities had been conducted including reciprocal visits onboard ships, sporting, cultural interactions and professional interactions between personnel of both the coast guards.

It was on Thursday that the participating ships set sail from the Chennai harbour for the commencement of the exercises. Four vessels of the Indian Coast Guard and one visiting vessel the JCGS Echigo were there.

The first demonstration was that of a simulated pirate sighting (the vessel of the NIOT was designated as the pirate vessel for the simulation), during which the Coast Guard Dornier Aircraft detected a pirate vessel and relayed the message to the participating vessels following which the flagship ICGS Shaurya and its fleet proceeded on the course of action.

Based on the instructions received, the smaller interceptor vessels, that travel at faster speeds while having high manoeuvring capability, sped towards the pirate vessel. Smaller speedboats laden with coast guard gunmen were lowered from the Shaurya and Echigo and they joined the other vessels in approaching the pirate vessel. They performed a series of close turns around the pirate vessel to interdict it and ensure the surrender of pirates.

The large interceptor boats fired warning shots (flares) to indicate that the pirates had no option but to surrender. Following this, the gunmen would conduct a board and search operation to understand the nature of cargo being carried by the pirate vessel and to investigate the pirates and rescue hostages.

In line with the Coast Guard’s role of being a saviour at sea, there was a demonstration of external fire suppression. The task was to douse a raging fire on another vessel (simulated using smoke), using the fleets’ onboard pumps.

The helicopters flew by the ships and also displayed their precision drop capability by dropping replenishments within a designated area that had a diameter of around 1–meter. The choppers also demonstrated their search and rescue roles that involved looking for marooned people and winching or airlifting them using a diver.

The exercise concluded with the ceremonial steam past of the vessels and the flypast of the aircraft.

The journey so far and the way ahead

Addressing a press conference after the exercise, the Director-General of Indian Coast Guard K Natarajan said that the apprehension of the pirate vessel MV Alondra Rainbow by the Indian Coast Guard on November 16, 1999, off India’s West coast, had marked the beginning of dedicated, focussed and regular interaction between the Coast Guards of India and Japan. He stated that the apprehension of the vessel brought out the significance of a coordinated operation and encouraged the policymakers to have a series of conferences and meetings to discuss issues of various crimes at sea.

According to Admiral Takahiro Okushima, Commandant, Japan Coast Guard, the relationship between the two forces has been steadily enhanced and the major takeaway has been the validation of procedures.

The Director-General and the Admiral agreed that many countries have felt the need to develop their Coast Guard due to the economic issues arising from the smuggling of gold and other precious metals, drugs, illegal wealth extraction and human trafficking.

Speaking to WION, DG K Natarajan said, “Currently we have 145 ships and 62 aircraft in our fleet and we hope to reach 200 ships and 100 aircraft by 2025. Fifty ships are currently under construction and we will also be acquiring the Advanced Light Helicopter Mk3 developed in India besides the twin-engine advanced helicopter. We aim to integrate our different radars with the vessel traffic management system and are ready to meet all requirements.”

When asked about the future cooperation with foreign countries, he said, “Australia, Philippines, Malaysia and Indonesia are willing to sign agreements. On the challenges pertaining to signalling and communications during exercises with foreign forces, he said, “mariners have no language and we communicate using signs and flag languages. Be it a warship or fishermen, we have abbreviated codes – International Code of Signals(Interco). When it comes to the Indian coast, we communicate with fishermen in the Indian languages that are spoken in the respective regions.”

“Only by accumulating experience can we improve the skill and deal with challenges. We will have more and more events happening every year, but the level of criminals go up every year and we have to constantly improve our level and continue these exercises in future,” Admiral Takahiro Okushima told WION on the significance of greater cooperation and exercises.