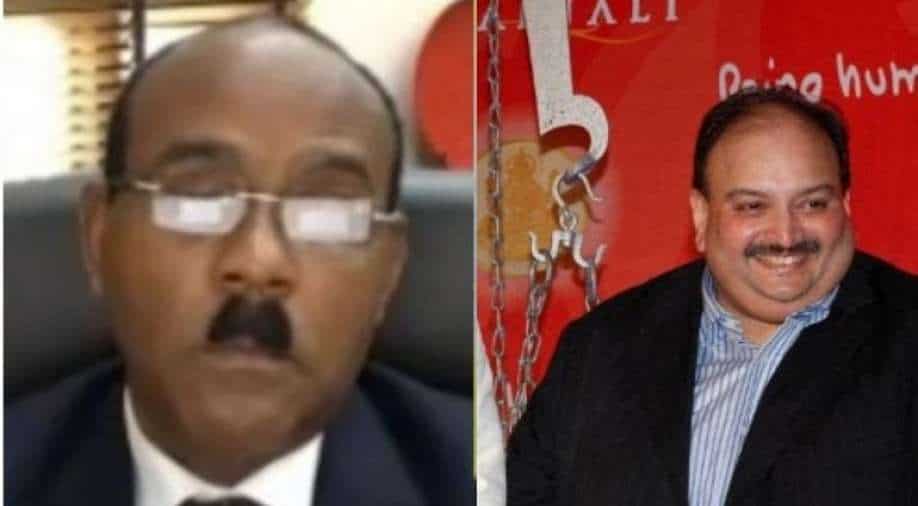 In an exclusive conversation with WION, Prime Minister of Antigua and Barbuda Gaston Browne has said that his government has informed India that Mehul Choksi is missing

In an exclusive conversation with WION, Prime Minister of Antigua and Barbuda Gaston Browne has said that his government has informed India that Mehul Choksi is missing, with information being also shared with Interpol.

Fugitive Choksi is wanted by Indian authorities in the Rs 14,000 crore PNB fraud case and had fled to the country in 2018, with India seeking to extradite him.

Speaking to our Principal Diplomatic Correspondent Sidhant Sibal, Gaston Browne said, "The missing persons report that was put out locally is now being shared with Interpol".

Choksi has been missing from the country for the last 24 hours with local authorities able to locate the vehicle he used last.

WION: Mehul Choksi has been missing, it has been 24 hours. Could you give more details?

Gaston Browne: Yes, we had a report from Mr Choksi's household that he went missing.

Law enforcement has got involved, they have located his vehicle but they are yet to locate Mr Choksi. Mr. Choksi had two matters before the courts of Antigua and Barbuda. One the revocation of his citizenship and second his extradition back to India.

He recently asked the case to be expedited and also switched his attorney. He recently contracted the services of Mr Edward Fitzgerald CBE QC, a well-known and celebrated criminal lawyer in the UK. He has been fighting the extradition as well as the revocation of his citizenship. Today, as much as he is missing, We have no reliable information, that he has fled the country, even though there is speculation to that effect.

Our STRATCOM has actually issued a missing person report and that report is being shared with Interpol. I am aware that India has put out the Red Notice if he had indeed fled to another country, it is a matter of time. He will be identified, and then perhaps government of India will have to seek some form of cooperation from whichever country he would have fled too.

But we really do not have any tangible information that he has fled the country and law enforcement are doing all they can in order to locate him.

Gaston Browne: The missing persons report that was put out locally is now being shared with Interpol. It is what is called a Green Notice.

A Green Notice will be placed internationally for Mehul Choksi as a missing person and that will complement the Red Notice that has been already issued by the government of India, if by chance he has absconded to another country, then as soon as he is identified, action could be taken against him.

In so far as cooperation with the Indian government, I spoke to the Indian high commissioner to Antigua and Barbuda this morning, so they fully are aware and we have been collaborating as have done in the beginning of the case.

WION: So you have officially informed the Indian government of Mehul Choksi being missing?

Gaston Browne: Absolutely, we have.

WION: If it is unlikely that he fled the country, what could have happened to him?

WION: What are the chances of his extradition, and of him being sent back to India?

Gaston Browne: We feel confident that he will be extradited but as you know the law is such that we have to allow the due process. After he exhausted all of his appeals, we will take action to have him extradited.

I want to make it clear to the people of India, and the entire world, Mehul Choksi is not welcomed here in Antigua and Barbuda. We want him out of the country, and as soon as he leaves, the better.

WION: What is the situation of vaccination in your country and India's support?

Gaston Browne: I want to once again thank PM Modi for that very important act of benevolence in which he made 500,000 vaccines available to the Caribbean region.

I guarantee you that if it wasn't for those vaccines, we would have seen a greater crisis. I can assure you that he has literally saved tens of thousands of lives here in the Caribbean region and for that, we are eternally grateful.

That type of benevolence helps to strengthen both the bilateral and multilateral relations with India. So I think, it was easily one of the most benevolent acts we have seen by any leader within the last century, especially considering India has its own problem. And we all know that India was in the need of those vaccines, but he went the extra mile to assess many countries globally and from that standpoint, he should be commended.

We share our empathy with the people of India. We know you are presently going through a crisis with COVID-19 and we just hope in the coming weeks you will get things under control and there will be a significant reduction in hospitalisation and deaths of the Indian people.

WION: How has been the collaboration on climate change between India and your country?

Gaston Browne: Climate change is a problem for all humanity and it requires global cooperation and global solidarity.

We believe all of us should continue to meet our commitments that we have agreed to in the Paris Accord and I know India has been taking the necessary steps to reduce its emissions and at the same time even to help poorer countries to build the capacity to adapt and mitigate against the effects of climate change.

This requires global action in order to save our common humanity...In fact, we are very happy that the US has rejoined the Paris Accord and is now providing leadership in this very significant existential threat that is facing all of humanity.

The cooperation goes beyond India and the Caribbean and what is required is global solidarity and cooperation and action in fighting climate change.

WION: How do you see India's Coalition for Disaster Resilient Infrastructure and International Solar Alliance?

Gaston Browne: India has been helping countries globally, especially the small vulnerable countries to build capacity and we are impressed by that type of global leadership that is being exerted by India in helping us deal with this most significant existential threat that is facing all humanity.