Will break the jinx by forming govt in Mizoram for third time: CM Thanhawla 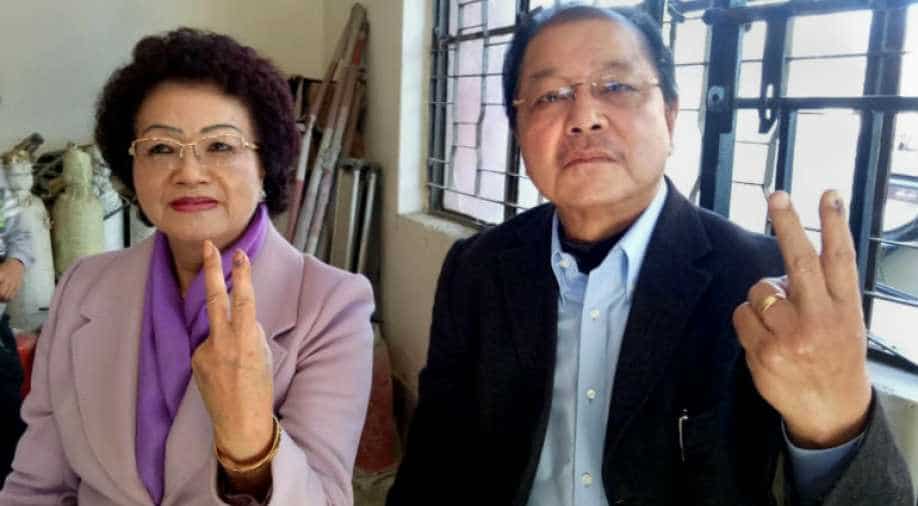 The four-time chief minister claimed that the Congress will win 27-37 seats in the ongoing Assembly elections.

Mizoram Chief Minister Lal Thanhawla said on Wednesday he is going to "break the jinx" of no party winning the third consecutive term by forming the next Congress government with full majority.

The nine-time MLA also alleged that opposition BJP, which is looking to open its account for the first time in the state, is pumping in huge money, mostly in the minority areas of Chakmas and Brus, to get votes.

"I am going to break the jinx because of our good work. I am coming with full majority," Thanhawla, who was with his wife Lal Riliani, told reporters after casting his vote at Zarkawt-II polling station in the state capital.

Neither the Congress nor its main opposition Mizo National Front (MNF) could ever form the third consecutive government since Mizoram got a full statehood in 1987.

Zarkawt-II falls under Aizawl North-III constituency, from where the chief minister's younger brother and Health minister Lal Thanzara is contesting.

Spending nearly one hour at the polling booth, the couple interacted with some locals gathered in the area. They later had black tea and cookies sitting on a bench inside a garage among a bunch of kids with whom they also shared some lighter moments.

When pointed out to the opposition's main point of campaign to bring in a change due to "anti-incumbency", Thanhawla said: "They can talk anything. They have the right to talk, because ours is a free democratic country. Everybody has the right to express."

The four-time chief minister claimed that the Congress will win 27-37 seats in the ongoing Assembly elections.

On the possibility of the Congress taking support from the BJP, as the saffron party has been said to have suggested in case of a hung Assembly, Thanhawla said, "I am not open to that. By mistake, I thought I would be voting the BJP, but I could not make mistake."

The senior Congress leader also said the BJP is "unlikely to get single seat" this time.

Talking about the sensitive Chakma and Bru voters, Thanhawla said: "Chakma (area), we are winning again. Bru area, I don't know. If money power works... They have been lavished with huge amount of money."

Asked specifically who is putting in money in Chakma and Bru areas, he alleged: "The BJP of course... The leaders were called down somewhere by Himanta Biswa Sarma. They might have been lavished by huge sum of money."

Asked again, whether he meant that Assam Finance Minister and BJP leader Himanta Biswa Sarma is buying votes with money power, the chief minister said: "I am not saying that, but I do suspect that."

The Congress has been in power in Mizoram since 2008 and is eyeing a third consecutive term. In 2013 Assembly elections, the Congress won 34 seats, while the main opposition party Mizo National Front (MNF) had won five, and Mizoram People's Conference bagged one.

The Congress and the MNF have left no stones unturned to woo voters. On the other side, BJP has launched a spirited campaign to get power in this strategically important Northeastern state sandwiched between Myanmar and Bangladesh. BJP president Amit Shah even declared that Christmas will be celebrated in Mizoram under the BJP rule this December.

Mizoram is being seen by BJP leaders as the "final frontier" in its "Congress-free Northeast" campaign as the saffron party has already secured power in Assam, Tripura, Manipur and Arunachal Pradesh, besides joining the ruling coalitions in Meghalaya and Nagaland.

While the Congress and MNF are contesting in all the 40 constituencies this time, the BJP is in the fray for 39 seats.