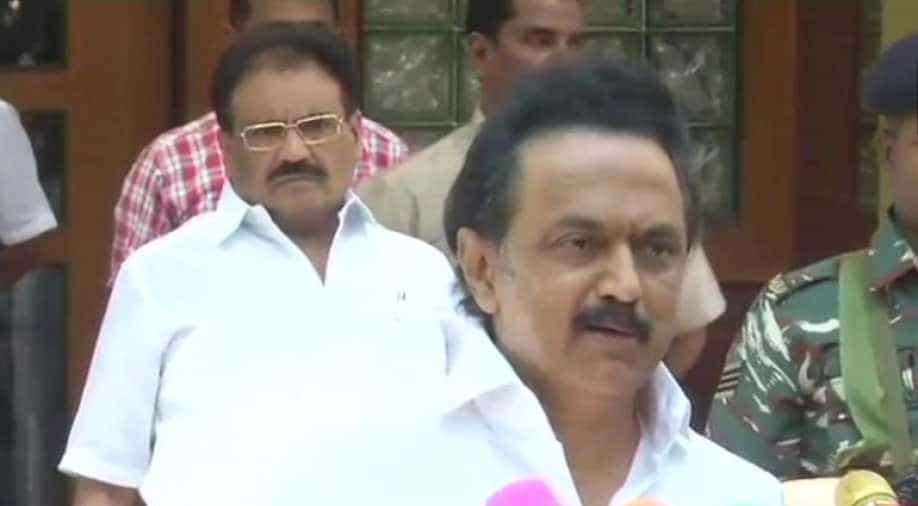 Stalin said that the DMK was already a part of the UPA and since there was one more year for the general elections, whatever decision had been taken would be discussed with a high-level committee.

Stalin said that the DMK was already a part of the UPA and since there was one more year for the general elections, whatever decision had been taken would be discussed with a high-level committee.

"TMC Chief Mamata Banerjee called me on March 4 for a 'Third Front'. DMK is a part of UPA already and there is one more year for general elections, so whatever decision we have to take we will discuss with the high-level committee," Stalin said in Chennai.

The Trinamool Congress had earlier confirmed that its chief Mamata Banerjee had reached out to Stalin for co-ordination in and outside Parliament.

"Mamata Banerjee has taken a lead in defeating the BJP by talking to 'federal' parties. "We are on track", TMC Rajya Sabha member Derek O'Brien had said.

His remarks came in the backdrop of Mamata Banerjee again pitching for regional parties to come together to take on the BJP after the results of assembly elections in Tripura, Meghalaya and Nagaland.

Derek O' Brien had said that during her nearly 12-minute conversation, Mamata Banerjee told Stalin that a good show by the TMC and the DMK in West Bengal and Tamil Nadu respectively would mean a block of nearly 75 MPs in Parliament.

A day after he announced his entry into national politics, TRS chief K Chandrasekhar Rao had received support from various political leaders, including Ms Banerjee.

"From morning, I have been receiving many calls from various places in India. This afternoon West Bengal CM Mamata Banerjee called me and said that I have taken the right decision and she will be supporting me and that we will go forward together," Mr Rao had said a couple of days ago.