WATCH: 'Slowdown visualised by some has not even impacted', says Arun Jaitley 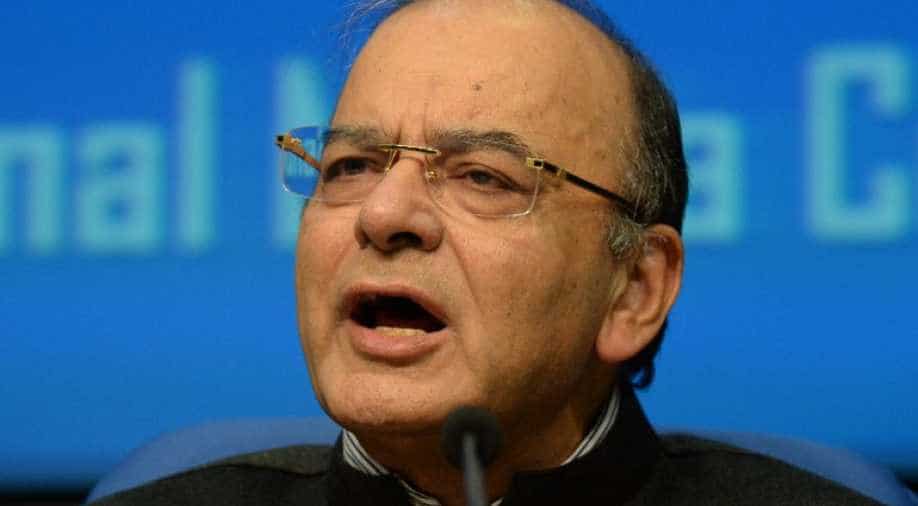 The latest salvo against Jaitley's handling of the economy was fired by former NDA finance minister Yashwant Sinha. Photograph:( AFP )

Finance minister Arun Jaitley on Thursday responded to allegations that he has "botched" the economy.

"Direct tax figures are 15.7% over and above last year's figure, so this so-called slowdown visualized by some, hasn't even impacted," he said.

Direct tax figures are 15.7% over & above last year's figure, so this so called slow down visualized by some, hasn't even impacted: FM pic.twitter.com/XdB6bNvWdE

The growth rate of the Indian economy has however fallen consistently over the last six quarters.

Jaitley said that demonetisation was meant to link the "anonymous" money operating in the market to its owner.

Demonetisation was to make sure that the anonymous tender which operated in market gets identified to its owner: FM Arun Jaitley pic.twitter.com/BKndPtCmkm

Jaitley added that Prime Minister Narendra Modi "had a very strong agenda on creating a new normal as far as India's shadow economy was concerned".

Prime Minister had a very strong agenda on creating a new normal as far as India shadow economy was concerned: FM Arun Jaitley

Jaitley also took a potshot at the Opposition Congress.

"I can conveniently forget a policy paralysis, 4 billion reserve left in 1991, and I can switch over and change a narrative," he said.

"Small areas which paralysed, at least UPA 2, because of discretions being used and misused. We were completely able to distance ourself from these discretions," he added.

He also said that the Opposition had pushed for a delay of the GST rollout.

"Those who had pushed the country into policy paralysis, when they saw it (GST) coming, asked to postpone it," he said.

On India's black economy, Jaitley said "It had corrupted us as a society, tarnished our image globally".

"There was no way in India you could do business without relying on alternate mechanisms of payment," he added.

He also said that "We gave opportunity to people to come clean about their accounts held abroad".

He added, "Had announced this year, how do we legitimise political funding in India so underground funding itself comes to an end; now in final stages."

Had announced this year,how do we legitimize political funding in India so underground funding itself comes to an end;now in final stages:FM pic.twitter.com/ZIhN2XFLks

Jaitley had been speaking in Delhi at the launch of the book "India at 70".

Jaitley has come under severe attack of late for his handling of the economy.

Sinha's salvo came in the form of an opinion article in Wednesday's Indian Express newspaper.

Sinha, in his piece, blamed Jaitley squarely for botching up the economy.

Sinha started his piece by saying: "I shall be failing in my national duty if I did not speak up even now against the mess the finance minister has made of the economy. I am also convinced that what I am going to say reflects the sentiments of a large number of people in the BJP and elsewhere who are not speaking up out of fear."

He then went on to ask: "So, what is the picture of the Indian economy today?," Sinha asked in his piece.

And to answer: "Private investment has shrunk as never before in two decades, industrial production has all but collapsed, agriculture is in distress, construction industry, a big employer of the work force, is in the doldrums, the rest of the service sector is also in the slow lane, exports have dwindled, sector after sector of the economy is in distress, demonetisation has proved to be an unmitigated economic disaster, a badly conceived and poorly implemented GST has played havoc with businesses and sunk many of them and countless millions have lost their jobs with hardly any new opportunities coming the way of the new entrants to the labour market. For quarter after quarter, the growth rate of the economy has been declining until it reached the low of 5.7 per cent in the first quarter of the current fiscal, the lowest in three years."

The other person who has relentlessly attacked Jaitley recently is BJP Rajya Sabha MP Subramanian Swamy.

Former RBI governor Raghuram Rajan's exit had also been preceded by a relentless attack on him by Swamy.