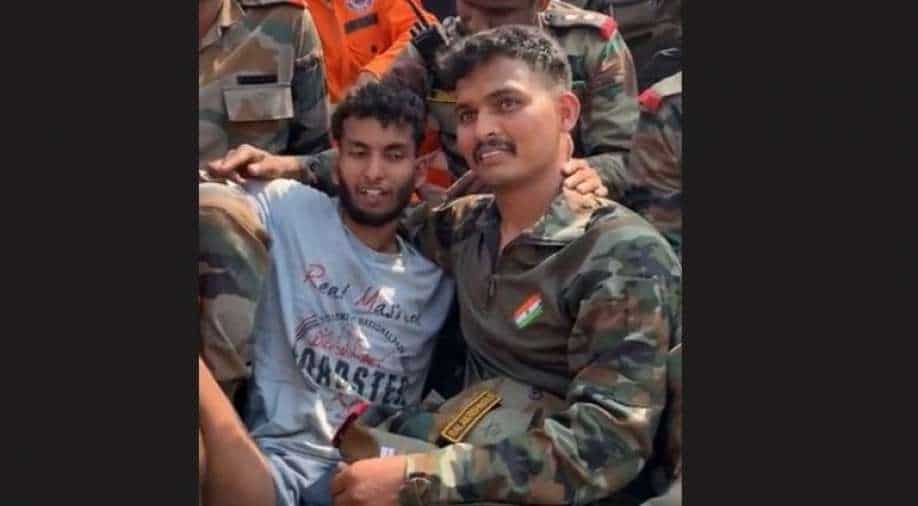 Babu with the Indian Army after being rescued Photograph:( WION )

In a video, an elated Babu is seen encircled by the daring team of the Indian Army that successfully completed the rescue operation.

Babu, the 24-year-old trekker was rescued by the Indian Army after being stuck at a steep hillside crevice, saying he felt reborn on Wednesday morning.

In a video, an elated Babu is seen encircled by the daring team of the Indian Army that successfully completed the rescue operation.

Thanking the Indian Army, Babu is seen planting kisses on the cheeks of the soldiers Deepak and Bala, who carried him to safety, at the hilltop. The enthusiastic rescue team is heard raising slogans hailing the Indian Army and Mother India.

Babu kisses and thanks soldiers Deepak and Bala who secured him, carried him to safety #India #Indian #bharatmatakijai pic.twitter.com/z0IpZrYhZX

Bringing to an end to a harrowing 43-hour-long wait, Indian Army teams from Wellington and Bengaluru managed to reach the trekker at the crevice by the steep hillside on Wednesday at around 9:30am.

After securing him with ropes and harness, the Army teams carried him to safety and provided first aid. Babu was visibly exhausted, after having starved for 43 hours, braving the day and night weather.

Babu, had been stuck at a narrow crevice at the Koormbachi hillock in Palakkad, Kerala, after he slipped and fell during a group trekking expedition he undertook on Monday.

Unable to rescue him, his fellow trekkers returned to the nearby town and alerted authorities. Teams from Kerala Police, Fire brigade, NDRF and an Indian Coast Guard helicopter had taken efforts to attempt a rescue on Tuesday. However, they couldn't accomplish the task as planned.

Having arrived in the late hours of Tuesday, the Army teams immediately commenced work and pulled off the rescue within 12 hours of their having reached the site.