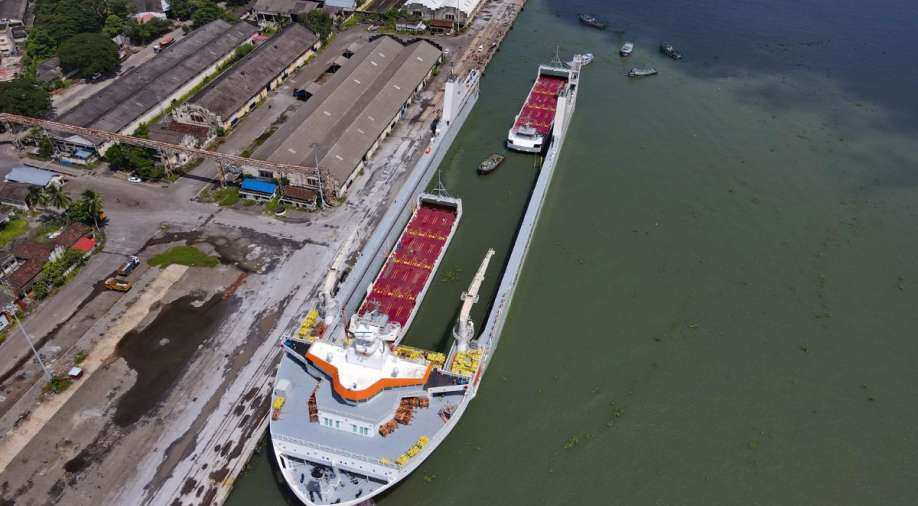 Two autonomous Electric barges built by India's Cochin Shipyard limited, being loaded onto a mothership, which is bound for Norway. Photograph:( Others )

Designed by Naval Dynamics, Norway using Kongsberg Maritime systems, these vessels were built at CSL with detailed engineering carried out by CSL

In a historic development for Indian shipbuilding, the state-run Cochin Shipyard Limited (CSL) has built and delivered two Autonomous Electric barges for a Norwegian customer ASKO Maritime AS. Partially funded by the Norwegian Government, this is a part of a green shipping programme that will facilitate emission-free transport of goods across the Oslo fjords. ASKO Maritime, a leading supermarket chain in Norway and aims to achieve Zero Carbon emission goals in its logistic service by 2026.

A fjord is a long, deep, narrow body of water that reaches far inland. Fjords are often set in a U-shaped valley with steep walls of rock on either side, such natural formations are found mainly in Norway, Chile, New Zealand, Canada, Greenland, and the U.S. state of Alaska.

In a 1st for #Indian shipbuilding, state-run @cslcochin builds & delivers 2 Autonomous Electric barges for use in #Oslo #Norway fjords

Christened after star Norwegian Olympians, the barges 'Marit' and 'Therese' are 67-meters-long and are full-electric transport ferries powered by a 1846kWh capacity battery. After the commissioning of autonomous equipment and field trials in Norway, these vessels will operate as fully autonomous ferries of ASKO that can transport 16 fully-loaded Standard EU trailers(around 450tons) in one go across the fjords.

Queried about the number of ships that CSL has delivered to foreign customers, Shivram N, General Manager, Business Development told WION that they numbered more than 40. He also added that, in the case of the two Norwegian barges, the basic autonomous equipment has been fitted at CSL and all necessary outfitting and cabling were done here. However, the advanced sensors would be progressively installed in Norway.

Designed by Naval Dynamics, Norway using Kongsberg Maritime systems, these vessels were built at CSL with detailed engineering carried out by CSL. These vessels are built under DNV GL Classification and flagged in Norway, under the rule regulations of the Norwegian Maritime Authority. Once in operation, these vessels will create a new benchmark for the merchant shipping world in the field of Autonomous Vessels with Zero Carbon Emission.

In a first-of-its-kind event, the two vessels will be transported in a yacht transport carrier to Norway. The newly built vessels were loaded to a large mother ship on Sunday and the mother ship is expected to set sail from Kochi on Tuesday and would reach Norway in about a month.