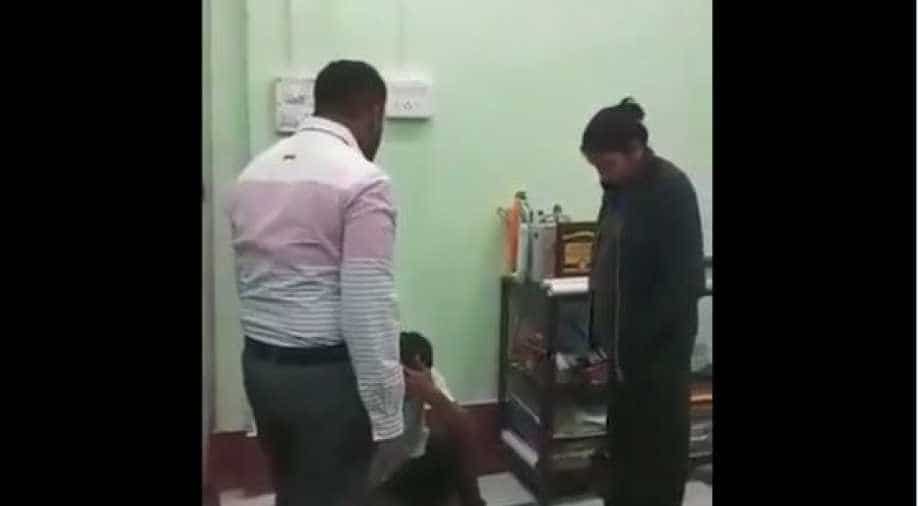 The husband and wife took turns to the man. The wife is heard asking, 'At who’s behest did you make such comments?' Photograph:( Twitter )

The entire episode unfolded at the police station without the district magistrate or his wife filing any official complaint against the young man.

A viral video, which surfaced on Sunday evening, left the Bengal government officials in a tizzy. The video shows a Bengal cadre IAS officer Nikhil Nirmal, who is the current district magistrate of Alipurduar, beating up a young man mercilessly.

In the video, Nirmal and his wife both take turns and beat up a local youth inside the Falakata police station in presence of inspector-in-charge Soumyajit Ray.

According to sources in the police, the youth had made some lewd comments on Nirmal’s wife’s Facebook profile. Soon, he was summoned to the police station where he was beaten up by Nirmal and his wife.

Surprisingly, Nirmal is heard saying in the video, “I will not let you do anything against me in my district. I will enter your house and kill you.”

See how Bengal IAS officer, Nikhil Nirmal, district magistrate of Alipurduar district take law in his own hands. He & his wife beat up a youth for making lewd comments on his wife’s Facebook profile. Incident unfolds inside the police station & infront IC of Police @dna @ZeeNews pic.twitter.com/iRCO7SnRa6

The husband and wife took turns to beat him. Nirmal’s wife is heard asking the man, “At who’s behest did you make such comments?”

While the youth pleaded for mercy, the duo continued beating him up.

The entire episode unfolded at the police station without the district magistrate or his wife filing any official complaint against the man.

When the correspondent tried reaching Nirmal, he neither answered nor returned calls. The inspector-in-charge too did not answer calls despite several attempts.

Nirmal, is a 2011 Bengal cadre IAS officer and hails from Kerala.