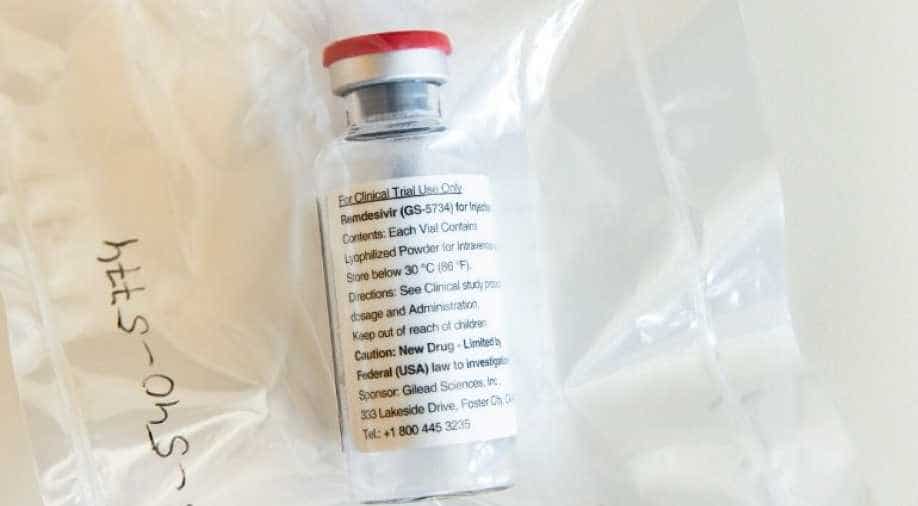 An ampule of remdesivir is pictured during a news conference at the University Hospital Eppendorf (UKE) in Hamburg, Germany, April 8, 2020, as the spread of coronavirus disease (COVID-19) continues Photograph:( Reuters )

According to reports, the MRP of Remdesivir marketed by Hetero Healthcare Limited is Rs 5400 but it's being sold at a price of anywhere between Rs 15,000 to 60,000," the LocalCircles said.

The country`s top drug regulator has directed all drug controller in the States and Union Territories to keep strict vigil to prevent the black marketing and sale of the anti-drug Remdesivir injection above the minimum retail price (MRP).

The Drug Controller General of India (DCGI) had granted approval to Remdesivir drug for restricted emergency use for the treatment of COVID-19 patients last month.

The Union Health Ministry in its Clinical Management Protocols for COVID-19 has allowed the use of Remdesivir for restricted emergency use purposes in patients in the moderate stages of the COVID19 disease under "investigational therapies".

Dr V G Somani wrote a letter to all State drug controllers stating: "Initially, Remdesivir formulation of the innovator was approved on June 1 for import and marketing the drug in the country. However, the importer is yet to import the drug after taking the import license from CDSCO. Subsequently, the CDSCO has granted permission to manufacture and market the drug to Cipla, Hetero, and Mylan laboratory for the same indication, conditions and restrictions."

According to reports, the MRP of Remdesivir marketed by Hetero Healthcare Limited is Rs 5400 but it's being sold at a price of anywhere between Rs 15,000 to 60,000," the LocalCircles said.