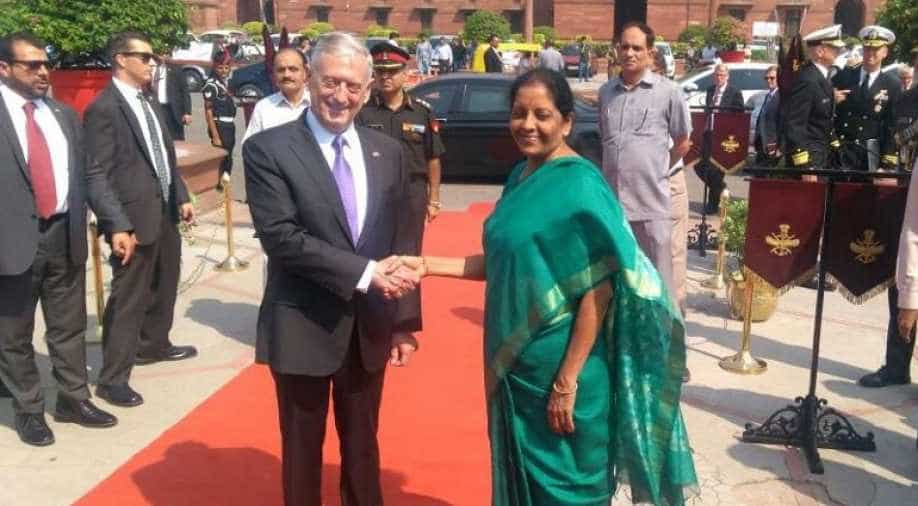 The Pentagon chief, who was received by Nirmala Sitharaman, will also hold talks with Prime Minister Narendra Modi.

US Defence Secretary Jim Mattis arrived in Indian capital New Delhi on Tuesday on a two-day visit. He is currently holding delegation-level talks with his Indian counterpart Nirmala Sitharaman.

The Pentagon chief, who was received by Nirmala Sitharaman, will also hold talks with Prime Minister Narendra Modi.

This is the first visit by a cabinet-level official to India under the Trump administration.

"The secretary will emphasise that the United States views India as a valued and influential partner, with broad mutual interests extending well beyond South Asia," the Pentagon said in a statement on Saturday.

During his visit, James Mattis will also participate in a wreath-laying ceremony at the India Gate.

During the meeting, the two leaders among discussed Pakistan, Afghanistan and terrorism and discussed the strategic relationship between Washington and New Delhi.

The US Defence Secretary said yesterday said that the strengthening of strategic relationship with India was not at the expense of others.

"The relationship that we are building with India is not to the exclusion of other countries," he said.

He also lauded New Delhi for being a constant supporter in the fight against terrorists in Afghanistan and for contributing tens of thousands of dollars for building infrastructure in the strife-torn country.

PM Modi and President Donald Trump had announced a two plus two strategic and defence dialogue between the two countries at the White House in June during the Indian PM's visit to Washington.