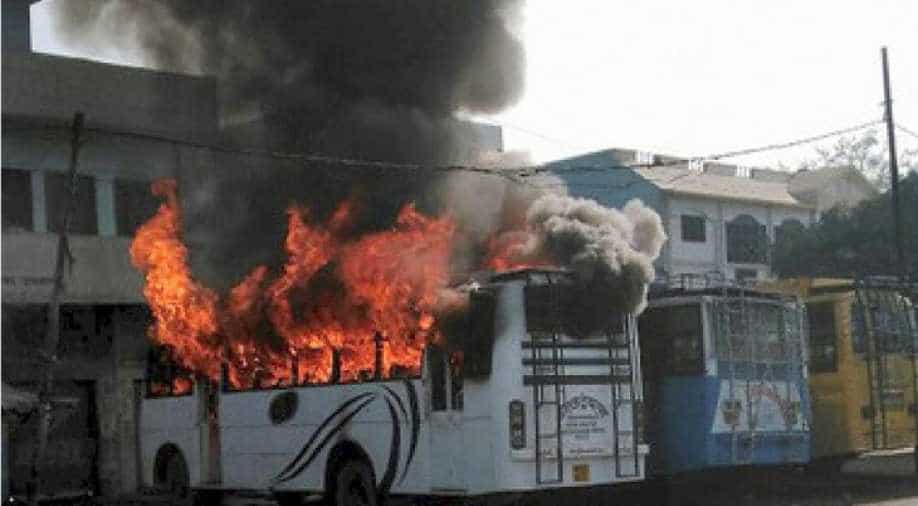 A bus set on fire by a group that went on the rampage after the cremation of a young man killed on Friday during a bike rally, in Kasganj on Saturday. Photograph:( PTI )

After clashes broke out in Uttar Pradesh's Kasganj city on Saturday killing a young boy, the police informed on Sunday that 32 people have been sent to jail under charges of murder and 51 people have been detained.

They further assured that the situation, which followed stone-pelting on a motorcycle rally taken out to celebrate the Republic Day was now under control.

32 people have been sent to jail so far under charges of murder. Besides them 51 people have been detained. Situation is completely under control. There was no incident today, police forces have been stationed to keep an eye on the situation: Sanjeev Kumar, IG #KasganjClashes pic.twitter.com/ziLLGJUxSm

Internet services have also been suspended till 10 pm on Sunday in trouble-torn areas in western Uttar Pradesh to prevent the spread of rumours on social media.

The police also informed that one country made bomb and pistol also recovered from the residence of one of the accused.

Raids were also carried out at one of the accused on Sunday morning.

Raids conducted at the residence of an accused in connection with #KasganjClashes pic.twitter.com/1fHyhuUgrj

He added, "Five companies of PAC and 1 RAF company had reached there (Kasganj) yesterday (Friday) along with additional civil police officers/policemen from the zone. One more company of RAF has been provided today (Saturday)."

The principal secretary (home) also informed, "After the peaceful cremation in the morning, some miscreants have tried to disturb peace which has been strictly dealt with. Only sporadic attempts of arson in the outskirts took place today (Saturday)."

A government spokesperson said prohibitory orders still remained in effect, but did not say whether the curfew had been lifted.

A strong posse of RAF and PAC personnel have intensified vigil in the district, whose borders have been sealed to stop elements detrimental to peace from sneaking into the city.

So far, 50 people have been arrested in connection with the violence allegedly announced by RP Singh, Kasganj District Magistrate.

"In all, 50 accused persons have been arrested. Efforts are on to arrest the rest of the accused," Singh said, adding that the figure was likely to go up.