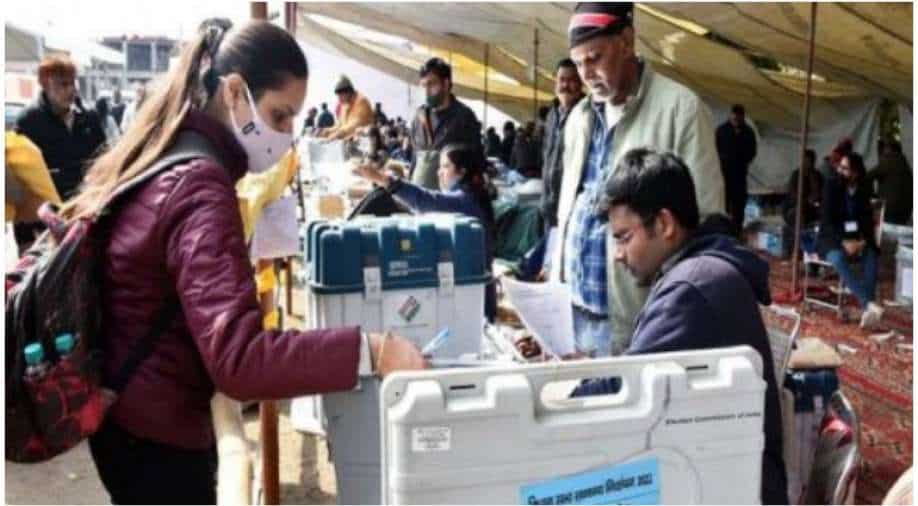 A woman completes formalities in order to caste her vote in first phase of UP elections on February 10, 2022 Photograph:( ANI )

In first phase of voting for Uttar Pradesh Assembly elections, 623 candidates are competing for 58 seats across 11 districts in the state. 22.8 million persons were eligible to vote across these districts

Voting for first phase of state assembly elections in northern Indian state of Uttar Pradesh took place on Thursday (February 10). Uttar Pradesh, literally meaning northern province, is the most populous state in India and has greatest political might in terms of representatives it sends to Indian parliament.

State elections in Uttar Pradesh are often seen by political parties as a step towards preparing for parliamentary elections. Bharatiya Janata Party's (BJP) Yogi Adityanath is the current chief minister of Uttar Pradesh who is looking to retain power while Indian National Congress, Samajwadi Party and other opposition parties are looking to wrest control.

In first phase, 623 candidates are competing for 58 seats across 11 districts in the state. 22.8 million persons were eligible to vote across these districts.

"There were reports of a technical error in EVMs at some places. Those EVMs are being replaced," he said. He was quoted by PTI.

The second phase of polling for the Uttar Pradesh Assembly is scheduled for February 14.

586 candidates are in the fray for 55 Assembly Constituencies in the second phase. Post the completion of the seven phased elections, the counting of votes will take place on March 10.