Ukraine crisis: Indian doctor holed up in a basement for over a week refuses to leave his jaguar and panther 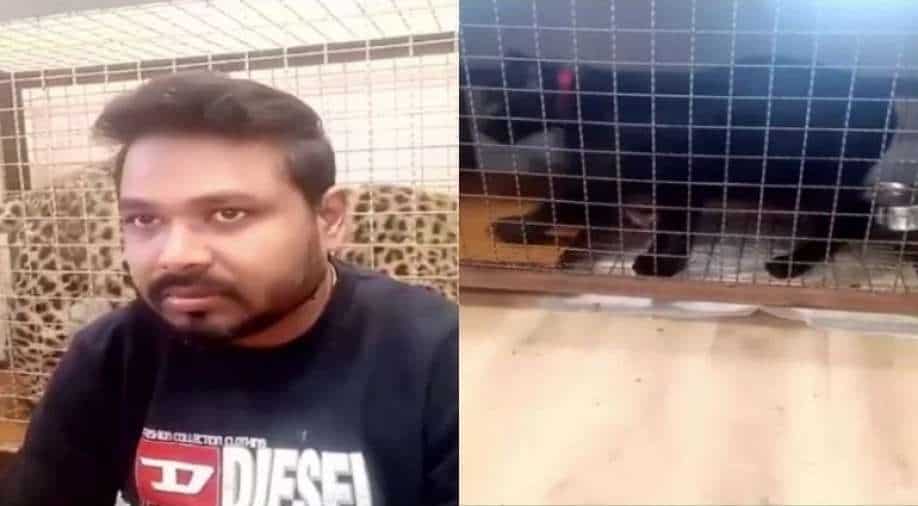 In this combination of images, Girikumar Patil can be seen along with his black panther in Severodonetsk, Ukraine. Photograph:( ANI )

Girikumar Patil, who is from Andhra Pradesh, has been practising orthopaedic since 2014 in Severodonetsk

An Indian doctor called Girikumar Patil, who has been holed up in a basement of war-torn Ukraine has refused to leave without his pets, which include a jaguar, and a black panther.

Famously known as Jaguar Kumar, the doctor said, "My big cats have been spending nights in the basement with me. There has been a lot of bombing happening around us. The cats are scared. They are eating less. I can't leave them."

"This is the second war I am living through. But this is scarier."

He has lived for over six years in Severodonetsk, a small town located in the Donbas region of eastern Ukraine. He hails from Tanuku in Andhra Pradesh’s West Godavari district.

Patil arrived in Ukraine in 2007 to study medicine. Since 2014, he has been a practising orthopaedic and now works in a government hospital

“Initially, I wanted a Bengal tiger or an Asiatic lion as a pet. In 2020, while visiting a local zoo here, I saw the jaguar, orphaned and ill. With the permission of the authorities concerned, I took him to a veterinary hospital, provided treatment and adopted him,” he said.

“I used to take him on walks in the forest before the war. Those were the most joyful days in my life.”

Also read | Harjot Singh, the Indian shot at in Kyiv crosses into Poland, thanks officials

“I along with all my pets went into the bunker after the war started. They have been cooperative and silent. But it has now become difficult for me to provide them with sufficient meat, as I can’t go out frequently,” he expressed his difficulty.

“I will never abandon my pets to save my life. Of course, my family is urging me to return. My pets are my children. I’ll stay with them and protect them until my last breath,” he vowed.

Giri, who is single, has been stepping out of his cramped basement only to buy food for his cats - the male jaguar is 20 months old and the female panther is a six-month-old cub - after the curfew ends early in the morning.

"I am the only Indian out here, and at night I am alone in the neighbourhood. Most of my neighbours have moved to nearby villages. I am going to hold out," he said.