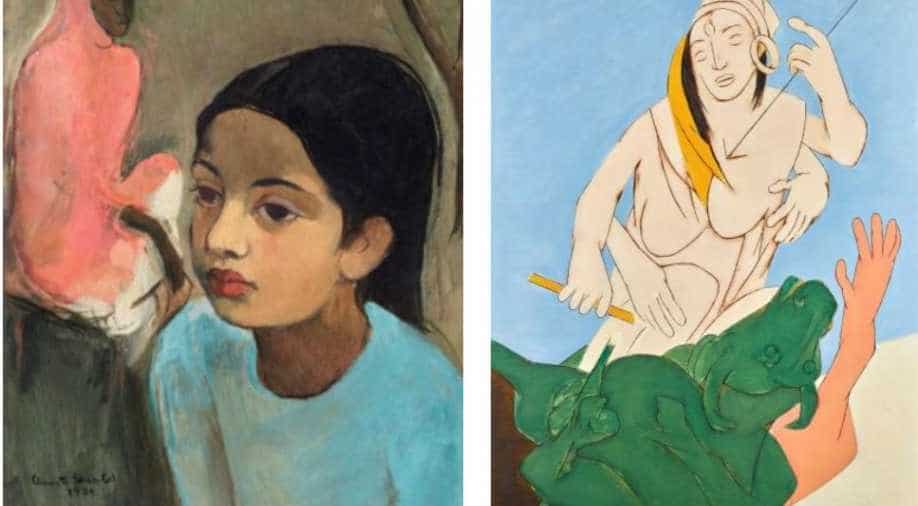 Image was part of Sotheby auction's press release. Photograph:( Others )

Art works worth $7.9 million (Rs 55.40 crore) were sold at the auction, a Sotheby's official said, adding over 75 per cent of sold lots achieved prices above their pre-sale high estimates.

Mehta's painting had remained in the same private collection ever since it was commissioned from the artist in 1993.

Strong competition for Amrita Sher-Gil's "The Little Girl in Blue" drove the painting to sell over the high estimate for Rs 18.69 crore (USD 2.7 million), a record price for the artist in India.

This is only the seventh oil painting by the artist to be offered anywhere in the world. The work had remained in the same collection for 80 years, since it was selected by the artist for her first solo show in 1937.

Earlier in the sale, a second work by Sher-Gil, a work on paper created by the artist when she was just 10 years old, was also sold.

Edward Gibbs, Sotheby's Chairman for the Middle East and India, said, "This is a milestone moment for Sotheby's. Tonights sale reflects Sotheby's continued commitment to the South Asian market."

One of the most important sculptures created in modern India, an untitled 1950s bronze by Sadanand Bakre, achieved a record price for any 20th century Indian sculpture at Rs 1.88 crore.