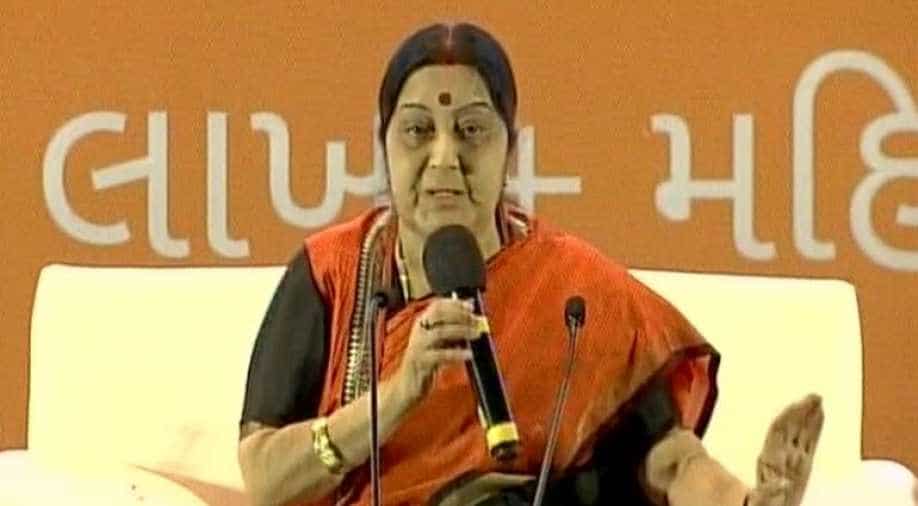 Sushma Swaraj was speaking at a rally in Ahmedabad on October 14. Photograph:( Twitter )

The external affairs minister was interacting with over one lakh women in Ahmedabad, capital of poll-bound Gujarat.

At a rally in Ahmedabad, the external affairs minister said that the so-called anti-women party had given four women chief ministers and four women governors to the country.

She also highlighted that there were six women who were cabinet ministers in the BJP-led government at the centre and that two of the four members of the Cabinet Committee on Security were also women.

"Rivals call BJP anti-women party but it gave four women chief ministers and four women governors to the country. Also, there are six women cabinet ministers under the BJP Government."

She added, "I was made the EAM in May 2014 and now Nirmala Sitharaman is the Defence Minister. Two out of four Cabinet Committee on Security members are women now."

The external affairs minister was interacting with over one lakh women in Ahmedabad, capital of poll-bound Gujarat.

Twitter was quick to praise the external affairs minister and #MahilaTownHallWithSushmaji became one of the top trend on the social networking site soon after her speech.

There are 6 women minister's .....
This is women empowerment #MahilaTownHallWithSushmaji

Rahul Gandhi, during a rally in Gujarat, targeted the BJP and the Rashtriya Swayamsevak Sangh (RSS) and accused them of neglecting women and said that it wasn't interested in women's rights.

"How many women are in the RSS? Have you ever seen women in shorts working with RSS? I have never seen. You see women in the Congress all the time. In the RSS you will never see women," said Gandhi.

At Saturday's rally, Sushma Swaraj added that the remarks did not suit the leader of his stature.