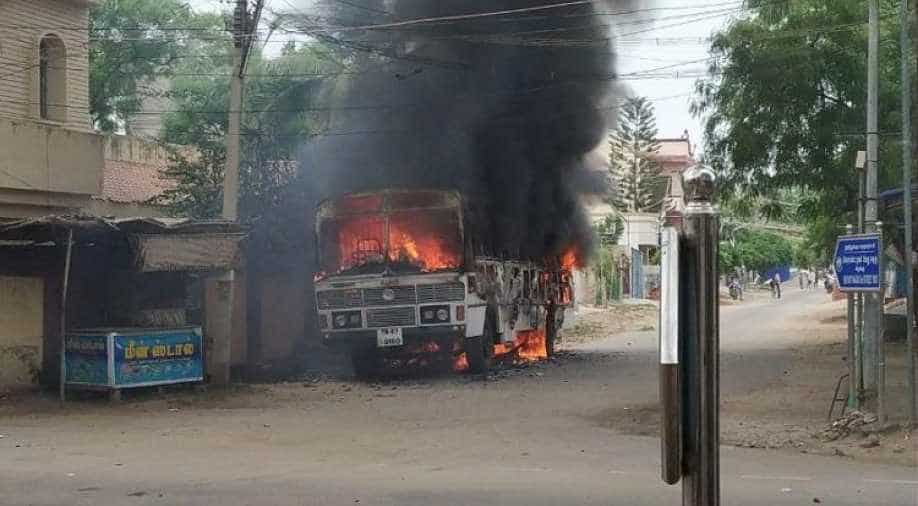 The police bus was set ablaze on Wednesday in Thoothukudi by unidentified persons Photograph:( Twitter )

A police bus was set ablaze on Wednesday in Thoothucorin by unidentified persons, a day after the town saw widespread violence as police and protesters, agitating against the Sterlite copper smelting plant, clashed. Eleven people died as the police opened fire on the protesters and 70 people are injured. Those who died include women and children.

Fresh clashes also broke out today as the locals clashed with the police outside General Hospital in Tuticorin where people who were injured in Sterlite protest yesterday are undergoing treatment.

CPI(M) organised a protest at Coimbatore in Tamil Nadu against the death of 11 people in anti-Sterlite protest.

#SterliteProtest: Forces deployed outside General Hospital in Tuticorin. A bus was set ablaze outside the hospital by protesters earlier #TamilNadu pic.twitter.com/PgdAP8OKgj

After meeting the victims, Kamal Haasan said merely announcing compensation isn't the solution. This industry must be shut and this is what people demand, he said.

Meanwhile, Tamil Nadu government today appointed a one-person Commission of Inquiry headed by a retired judge of the Madras High Court to probe the violence at Tuticorin in which ten people were killed.

The inquiry will cover the "law and order incidents following the siege of the District Collectorate by thousands of persons violating prohibitory orders," an official release here said.

TamilNadu: A bus was set ablaze by protesters outside General Hospital in Tuticorin #SterliteProtest pic.twitter.com/kmX4tn9G3v